The 27 year old took over from Rob Kirton, Bewdley, Worcs at the recent YLBC AGMheld in Carlisleand will serve a two year term of office. Well-known in Limousinand Blonde pedigree circles, Willie is a former Secretary and Treasurer of the vibrant Young Limousin Breeders Northern Ireland (YLBNI) having been on the committee since its formation. Earlier this year he played an important part in the Organising Committee of their 10th Anniversary Moira Calf Show held in the autumn. 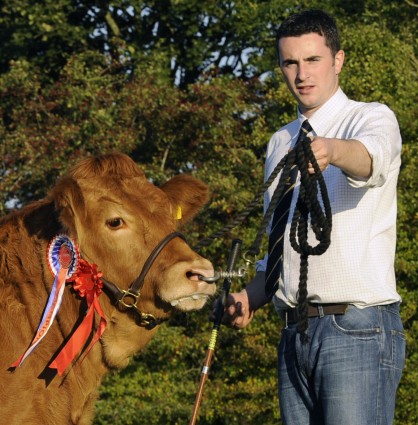 Young Limousin breeders are active in all regions of the United Kingdom.  Under the national structure of the YLBC and its office bearers, events are organized at both national and local level with the assistance of the British Limousin Cattle Society and its nine associated regional clubs.  Varied events and activities held in the year include: National Young Breeders’ Stockjudging, an Anglo Irish Stockjudging event, calf shows, and social events.  In addition organised days, and courses in preparing, halter training, clipping, showing cattle, and general stock knowledge, are also held.

Commenting on his new role, Willie McElroy said: “I’m delighted to have been elected and look forward to my time as Chairman.  We have a number of events planned including the Annual Calf Show on December 15th at Carlisle on the evening prior to the Red Ladies Derby Sale as well as the Annual Stockjudging which is continuing to move around the country and is due to be hosted by Devon County Show on 19th May 2012. Over the next couple of years I hope to forge strong links with Young Breeders throughout theUK and continue to move the YLBC forward and encourage those young people to get involved with what is a great Club.”