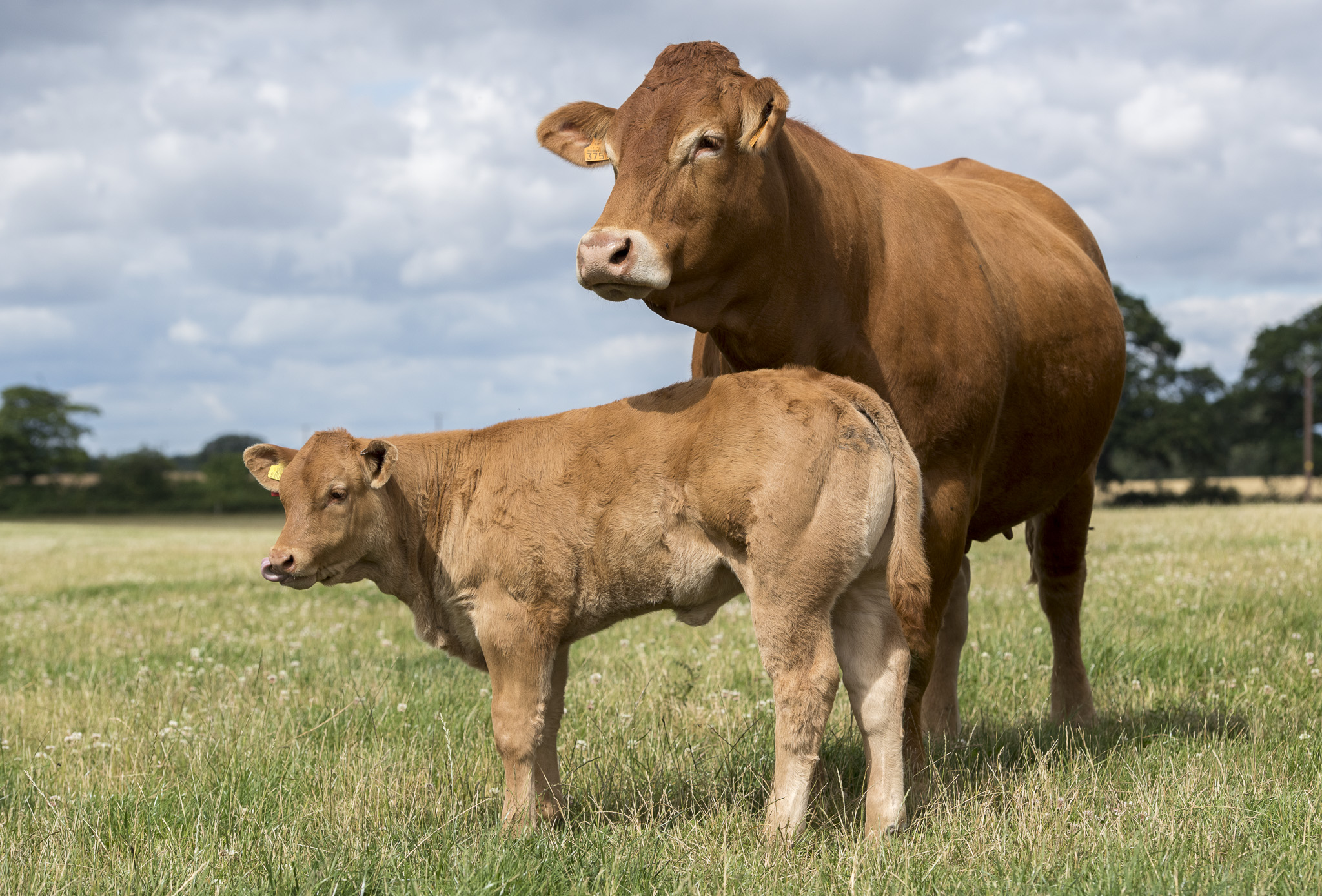 The day comprised of Dispersal sales from the Redland Herd of Messrs RM & HJ Lewis, the Hollyash Herd of Messrs J & G Burrough, the Redrock Herd of Messrs JS & JO Dodd and the Castlenook Herd of Mr A Irving. Also catalogued was the Autumn Winter calving portion from the Dyke Herd of JR MacGregor (Dyke) Ltd.

Topping the day at 15,000gns was a cow and calf outfit from the Redland herd. After many years of farming and producing quality pedigree livestock Mark and Helen Lewis have decided to retire from farming. As a result, the sale of the Redland Herd, which was established in 1999, gave new and existing pedigree breeders an ideal opportunity to acquire some outstanding brood cattle families and young stock which have a wealth and depth of breeding. In recent years Mark and Helen have purchased their sires in France with growth, muscle, milk production and mobility at the top of their agenda. They have always been keen to select animals with good conformation, a good frame, wide pelvis, good level topline and tail set, genetics which are evident throughout the entire herd.

The November 2011 born cow Gazelle by Volcain out of Civelle had her June born heifer calf Redland Novalty at foot. Gazelle was bred by the Chatelus herd in France. A powerful female with exceptional breeding she has been described as one of the best cows to have come out of France in recent years. She came forward for sale demonstrating great confirmation, mobility, size and frame with depth of muscle and hind quarter. Novalty is by Eldorado, a longstanding herd stock bull who was Reserve Intermediate Champion at the 40th Anniversary National Limousin Show in 2011. Taking the unit home was Geoff Hadfield for his Willowbank herd in Droylsden, Manchester.

The next top priced cow and calf outfit from the Lewis family was the smart Redland Helga and her bull calf Redland Merlin. Sold separately for 3,200 and 3,600gns respectively, they both went home to Barrie Farmers, Biggar, Lanarkshire. The September 2012 cow Helga is by Eldorado out of the Goldies Valmet daughter Redland Diamante. Helga is from an exceptional breeding family within the herd; her dam is out of Redland Sonique a powerful Flasch daughter by the herd’s foundation cow Penyparc Olsen. December 2016 born Merlin is by another of the stock bulls Heron.

Heron, who had been purchased as a calf at the KBS sale in Buvre in 2013 took the leading male price for the Lewis family. The September 2012 born bull was knocked down for 5,100gns to Peter Dale, Mirey Leys Farm, Ripley, Derbyshire for his Denbydale herd. Heron is by Diego out of Bussy, a well-regarded cow from the Lebourg herd in the Creuse region of France. Demonstrating his mobility in the ring, he presented as a powerful bull with a great top line and impressive length. He has already produced some quality progeny, bulls and females. His daughters have been described as having great style and power, and his first sons have sold to 5,000gns.

Both of the other stock bulls, Eldorado and Lasso made solid prices. The October 2015 born Lasso was knocked down for 4,400gns to E D Griffiths & Co from Carmarthenshire for their Mynach herd. Lasso, by Harold out of Heliane, was purchased at the Sofrelim sale in September 2016 to compliment the genetics of Eldorado and Heron. The September 2009 born Eldorado realised 3,000gns, making a long trip to his new home with W L Hollow, St Ives, Cornwall. Mark and Helen had purchased Eldorado privately in France from the Bourdarlas herd, particularly for his muscling and milk qualities. He has served the herd well over the years; most of his daughters have been retained in the herd.

There were some other firm prices achieved, with a handful of cow and calf outfits making over 3,000gns. Redland Imogen and her May 2017 heifer calf Redland Nikita went home to S Williamson, Co Tyrone for 4,500gns. Imogen is out of the Goldies Valmet daughter Redland Erica, a prolific breeder in the herd. Hermine and her December 2016 bull calf Redland Marcus sold separately in the ring, but as a unit realized 3,750gns. Hermine, is the first daughter of Abot MN RRE to be offered for sale in the UK, she went to W J Bradley, Co Londonderry for 2,800gns while Marcus, by Eldorado, was knocked down to G Smith, Fraserburgh for 950gns.

Redland Fiffany and her November 2016 heifer calf Redland Missi were knocked down separately for 1,600 and 1,500gns respectively, both to J Wilson, Kilmarnock, Ayrshire. Fiffany, another cow that has bred well in the herd, is a daughter of Redland Tiffany who goes back to one of the herds foundation cows Fleethill Maggie. Redland Ebony and her bull calf by Heron Redland Miracle were again sold separately to different buyers, but as a unit realized 3,100gns.

Having been breeding Limousin cattle since 1979 semi- retirement for Steadman and Judy Dodd brought forward the dispersal of their Redrock Herd.   Topping prices from the herd was a cow and calf unit, Redrock Jazzylady and her bull calf Redrock Mallard, together fetching 10,800gns. The April 2014 cow by Frewstown Fbrilliant out of Redrock Goldenlady was knocked down at 5,800gns to Mark Harryman and Sarah Warriner, Pickering, North Yorkshire. For Mallard, by the herds stock bull Shaws Jimmy the hammer went down at 5,000gns to Gary Bell, Haas Side Farm, Lockerbie. The pair of Redrock Jill and her heifer calf Redrock Magic came a close second in the pecking order. Jill and her heifer calf also sold as separate lots, but both to Messrs. Jenkinson, Whinfellpark, Penrith for 6,000 and 4,200gns respectively. March 2014 born Jill is by Frewstown Fbrilliant out of Redrock Enid. Her heifer calf is by Japelou.

The stock bull for the Redrock herd Shaws Jimmy realized 7,800gns. The March 2014 born bull went to J Orr & Sons Ltd for their Randerston Herd, Kingsbarns, St Andrews. By Ampertaine Commander out of Lowbarn Baacia Jimmy was bred by Mr M Burns, Glenside Farm, Ayrshire; he is described as being a quiet easy calving bull for both heifers and cows.

On behalf of Messrs. MacGregor, the Autumn/Winter calving portion of the Dyke Herd came forward for sale as the family attempt to restructure the business. In a demonstration of the robust demand ringside, prices across the board were consistently solid, both for single lots or cow and calf units. Leading the way was Dyke Flower and her October 2016 bull calf Dyke Mandela who together fetched 9,000gns. The March 2010 born cow Flower is by Cappaduff Aaron, who has left many good females in the Dyke and Allanfauld Herds. Out of Dyke Crocus she was knocked down to David Thomlinson, Scaleby, Carlisle for his Beeches herd for 3,000gns. Showing tremendous potential, extremely long with great growth and weight for his age Mandela by Dyke Gandalf, went to Messrs. Pickering for 6,000gns.

Dyke Gemma and her heifer calf Dyke Marilyn made 6,500 as a unit, although once again selling separately. The March 2011 Dyke Gemma, a favorite in the herd, went to R&M Scott, Brampton, Cumbria for 3,000gns while Marilyn, by Goldies Comet, sire of the 125,000gns Glenrock Illusion, was knocked down to Messrs. Jenkinson, Whinfellpark, Penrith . Marilyn has been shown successfully already, winning the calf class on her only two outings and standing Reserve Champion at Campsie show earlier this year. She is full sister to the herd’s best calved heifer Dyke Jemma.

Making 5,700gns as a pair was Dyke Empire and her heifer calf Dyke Majesty. The April 2009 born Empire is by Cloughhead Umpire out of Ronick Tigress. She was knocked down to JM & DJ Hamilton, Newton Stewart for 2.900gns. Messrs. Jenkinson, Whinfellpark came in for her October 2016 calf Majesty, by the noted Wilodge Vantastic son Claragh Franco at 2,800gns.

There was a small consignment from the Hollyash Herd on behalf of Messrs. J & G Burrough, who despite having started the herd as a hobby have enjoyed some success over the past few years winning the North West Midlands and North Wales Limousin Club small herd section. The top price from this cohort of cattle was achieved by the February 2013 cow Hollyash Ida with her heifer calf at foot. The pair was knocked down to NR & CS Hodgson, Kirkby Stephen for 2,700gns. Ida is by Carmorn Dauphin out of Hollyash Evita, her calf Hollyash Neta, born March 2017, is by Emslies Galileo whose progeny includes the 5,000gns Randerston Jasmine.

Another tidy consignment of cattle came from the Castlenook Herd on behalf of Mr A Irving who has been breeding Limousin cattle since 2004 after ceasing milk production. Leading price from this batch of cattle went to the pair of Castlenook Imogen and her bull calf Castlenook Mastermind who together made 5,000gns. The February 2013 born Imogen, a stylish Sympa daughter out of Castlenook Florence was knocked down to JC & S Little, Wigton, Cumbria for 2,200gns. Her September 2016 calf went home to RJ & AY Armstrong, Cockermouth for 2,800gns.

The cow and calf unit of Castlenook Cassandra and her bull calf Castlenook Nelson sold for 4,200 as a pair. Cassandra, recently AI’d to the Wilodge Vantastic son Loosebeare Fantastic is by the noted Goldies Terence out of Ronick Sandra. Her calf, Nelson is by the herd’s stock bull Feroce, a son of Vivaldi from the Lodge Herd. They both went home with J & MR Garthwaite, Torrington, Devon.

All in all the day saw over 380,000gns change hands, once again reflective of the ongoing demand for the breed and the quality of cattle being brought forward. The suckler producer and the feeders continue to be on the look-out for performance and efficiency. They want easy-calving, cheap to keep, easy managed cattle that are feed efficient, do well, hit target weights and grades with a great degree of consistency. Limousins are fitting that bill.