Another substantial offering of Limousin cattle at Newark on Saturday 4 July 2015, which included the major reduction of the Coachhouse herd for Gill & Barry Heald, hit a high of 5000gns, with a packed ringside of bidders in attendance demonstrating the continued demand for well bred cattle from the UK’s leading breed.

Auctioneer Paul Gentry said buyers had been presented with an excellent selection of cattle from the Heald family and others which demonstrated the strength in depth on offer within the breed.

“The Heald family’s consignment were true breeders cattle, exceptionally correct and carrying deep pedigrees including come of the breed’s leading names from the past and present. It was a pleasure to sell such high quality cattle and see the genetics built up by the family eagerly sought after.” 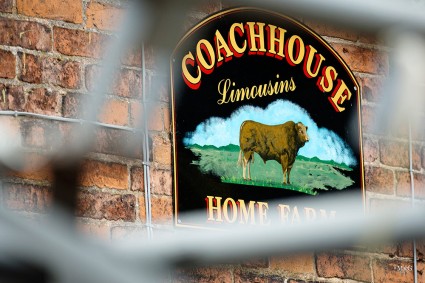 Leading the trade at 5000gns was Hollyash Claret from the Burrough family, with this June 2007-born fifth calver selling with her bull calf at foot by the French sire Chaumeil. Sired by Junior, Claret is out of Twemlows Velvet, a Tunnelby Scallywag daughter and was bought by the Gascoines Group, Southwell, for their Gascoines herd.

Then making 3800gns was Coachhouse Elliemay from the Healds. This daughter of the homebred Coachhouse Amos is a fourth calver and sold with a heifer calf at foot by the 15,000gns Rachels Ferrari. She is out of the Nenuphar daughter Coachhouse Appleblossom, bringing together some of the breed’s leading genetics and sold having run with Ronick Inspire. Buying this one were F and S M Stamper, Huntingdon.

And following her at 3400gns was the best of the maiden heifers from the Healds, Coachhouse Jacaranda. This June 2014-born yearling is by Rachels Ferrari and out of Coachhouse Emily, herself a daughter of the 11,000gns Bailea Ulsterman. This one also joined the Gascoines Group’s herd at Southwell.

Close behind at 3300gns was Coachhouse Annlou, a Goldies Necho daughter out of the Neutron daughter Coachhouse Sasque. This 2005-born seventh calver sold with her heifer calf at foot by Mereside Daytona and having run again with Ronick Inspire. She was knocked down to Richard and Judy Fountaine, Milton Keynes.

Then selling at 2900gns was the best from the Toppesfield Hall consignment. This was Toppesfield Idaho, an April 2013-born daughter of Edwards Franklin out of Jericho Florence, a Millington Vascular daughter. She sold having run with Loosebeare Bomber and was bought by J and T Waring, Everingham, Yorkshire.

Two then sold at 2800gns, with the first being Coachhouse Barbara from the Healds. This 2006-born seventh calver is by Coachhouse Rocco and out of Coachhouse Unique, a Haltcliffe Picasso daughter. She sold with a heifer calf at foot by Coachhouse Eebygum and again had run with Ronick Inspire prior to the sale. Buying this one were D J Summers & Son, Somerby, Gainsborough.

The other at this level was the single male entry from the Healds, Coachhouse Jammydodger. Sired by Coachhouse George this March 2014-born bull is out of Coachhouse Flossiemay, a Rocky daughter and sold to S W Mason, Arnesby, Leicestershire.

A trio then shared the next best call of 2700gns. First to take this bid was the very first lot of the sale, Coachhouse Sorrento, a Ruffland Ernie sired 11th calver born in 2001. She is out of Lumbylaw Ontario, an Espoir daughter and sold with a heifer calf at foot by Mereside Daytona. Sold having run with Ronick Inspire, Sorrento was the choice of previous buyers Richard and Judy Fountaine.

Next to make 2700gns was Toppesfield Ivory, a May 2013-born heifer by Forestside Freddie. She is out of Forestside Empress and sold having run with Loosebeare Bomber. Buying this one was G A Cropper, Rising Bridge, Lancashire.

And the final one at this money was Coachhouse Jet, a Mereside Daytona daughter. This February 2014-born heifer is out of Coachhouse Emerald, a Haltcliffe Picasso daughter and was bought by W Tomlinson, Treswell, Nottinghamshire.

Not far behind that at 2600gns was Coachhouse Hannah, a first calver by Coachhouse Eebygum. She is out of Coachhouse Vandolph, another daughter of the successful Haltcliffe Picasso, and sold with a heifer calf at foot by Rachels Ferrari. This one sold to F and S M Stamper, Huntingdon.

Also at 2600gns was Coachhouse Hebrides, a February 2012-born bull consigned by J F Black. Bred by the Healds he is by Overthwaite Crackerjack and out of Coachhouse Desiree, a Dauphin daughter. This one found a new home with P W Moss, Apperknowle, Sheffield.

Then taking the first of two 2500gns calls was Coachhouse Helleborine, an Overthwaite Crackerjack daughter out of Coachhouse Agnes, a Haltcliffe Picasso daughter. She sold with her bull calf at foot by Rachels Ferrari and having run with Ronick Inspire. This one sold to T W Roberts and Son, Lisene, Cardiff.

And taking a second and final 2500gns bid was Hollyash Hazel from the Burroughs family. This Hollyash Drummer daughter is out of Hollyash Evita, a Whinfellpark Virtual daughter and sold with a heifer calf at foot by Malibu. Offered having been AI’d to the French sire Chaumeil, she was taken by A D Masters, Docring, Kings Lynn.