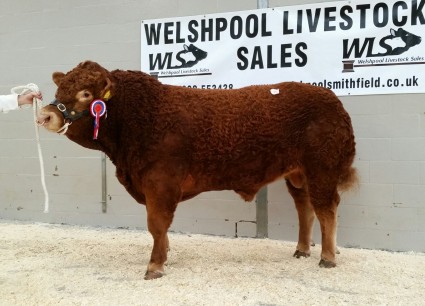 Heading up the NW Midlands & North Wales Limousin Club autumn show and sale at Welshpool on Saturday 28th November was Wilodge Jorel from the Wilodge team who sold for 6,000gns. Jorel is a son of Bial and out of the noted Wilodge Diamante cow family.  Earlier in the day he won the events pre-sale Championship award under the watchful eye of judge Thomas Illingworth from Lockerbie, Dumfriesshire.  Jorel sold to TE Thomas & Co of Caereinion, Welshpool.

Following at 4,600gns was the days Reserve Championship winner, Cowin Jagermeister shown by WDD & C James, of Carmarthen. Jagermeister carries a beef value of LM+47 and is a Wilodge Fastrac son and out of a Mas du Clo daughter Cowin Golddigger. He was knocked down to Messrs Williams of Abergele, Clwyd.

Reaching the 4000gns mark was the April 2014 born entry, Glangwden Jet, from Chris and Fiona Jerman of Caersws.  A son of Powerhouse Emblem and out of a Haltcliffe Ullswater daughter, Glangwden Garette, Jet sold to EH Hughes of Llandrindod Wells.

Leading the junior line up of bulls on offer was Tynllwyn Johnny shown by A Rees & Son of Welshpool.  Johnny is sired by Pyebrook Fritz and bred from a Linross Newman sired homebred cow Beatrix.  He sold for 3,400gns to TT Jones & Co, Llanbrynmair, Powys.

A further three bulls sold up to and over the 3000gn mark.  First at 3,300gns was Garnedd Jaguar from Messrs Jones, Betws-Y-Coed. This was a Bremore Djerk son and was purchased by SH Hillage & Son of Church Stretton.

The first prize junior bull from T Davies & Ptrs, Newtown, Tregynon Johnwayne, sold for 3200gns. This was a Carmorn Copilot sired son and sold to SV Deakins of Knighton, Powys.

An entry from the Ashledge pen from AG Kirton & Sons sold for 3,000gns.  Ashledge Jeremy, a Dolcorsllwyn Caio son, was knocked down to BL Griffiths of Newtown, Powys.

Leading the female entries at 3,600gns was a cow and calf outfit shown by Drew Coppinger of Shrewsbury.  Wilodge Highklass, a Sympa daughter from the renowned Ravenelle family, sold with her May born bull calf at foot Drews Logan.  They sold to Bolshaw Farm Partnership of Macclesfield to join their Bolshaws herd.

The last entry in the sale produced the next price tag of 2650gns sold by Highfields Park Farm.  Lowbarn Gucia, a daughter of Dumbreck Diamond and out of a Cloughhead Organic bred mother, she was purchased by Messrs Wood of Shrewsbury.

Also selling from Highfields Park Farm was an incalf heifer, Trueman Irishlass, which sold for 2500gns.  Sired by Wilodge Cerberus and bred from Hollybank Oprah, she also travels to Macclesfield for Bolshaw Farm Partnership.