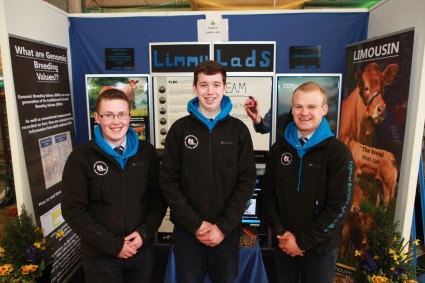 This fast establishing event, sponsored by Allflex, saw more than 140 young farming enthusiasts between the ages of eight and 24 showcase their skills in marketing and presentation, clipping, trimming and presentation, ring craft, auctioneering, butchering and their general knowledge of the industry.

Highlighting the event was undoubtedly the beef competition with a mighty 18 teams entered, including an exchange team from Canada.  There were no less than four teams with Limousin and Limousin Cross animals represented on their stands with these being;  Limmy Lads, Limousin Ladies, Limoholics and Midlands Lim Stars.

With a fantastic overall score of 882 out of a possible 1000, the Limmy Lads finished in first place overall having won the clipping and preparation section with a perfect score of 275, placing second in both the Skill-a-thon and promotion sections, and placing third in the Ringcraft.  The finish was a brilliant result for the three lads, John Graham, Thomas Illingworth, and Andrew Adam who, amongst their prizes, have won themselves a trip to compete at the Royal Winter Fair in Toronto Canada in November 2016.

John, who works at home as well as for National Milk Records, was the 2015 Highland Show Stockman of the Year and has been a member of the Glasgow Herald winning team over the four years he has competed.  An avid Limousin breeder, the family farm is also home to 1000 sheep, of which 40 are pedigree Blue Faced Leisters owned in conjunction with his brother James.

Tom, who also works at home on the family farm, is also a keen showman and has been on the halter of many winning cattle for the Illingworth family under the Glenrock and Eagleside prefixes. At just 14 years of age he was winner of the British Limousin National Stockjudging finals and was also part of the winning team for Scotland in the Anglo Irish Stockjudging competition in 2013.

Meanwhile, Andrew works at the family farm where the Adam family run pedigree Limousin and Charolais cattle, alongside Andrew’s own recently established Aberdeen-Angus herd. Himself a winner of the Young Limousin Breeders Young Handlers competition in 2015, Andrew also won the Young Handlers competition at the Royal Highland Show in 2014, and is currently studying agriculture at Oatridge College.

The Limmy Lads were supported by the British Limousin Cattle Society, together with Carrs Billington, SSS YF Club, Forth Vets, SAC Premium Cattle Health Scheme, and their two heifers were provided by Paul Dawes from his Dinmore Herd, Herefordshire. 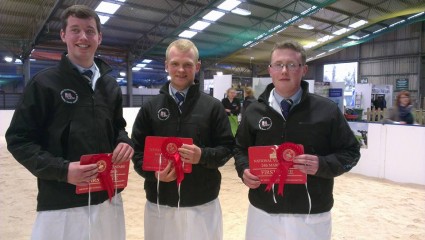 All of the Limousin teams performed really well and can be extremely proud of themselves for their achievements.  The Limousin Ladies, supported by the British Limousin Cattle Society and partially sponsored by Foxhill Livestock, whose team members were Stephanie Dick, Millie Hendy and Charlotte Alford, finished an excellent fourth equal with the Blue Stars. The girls led the Stockjudging by a comfortable 18 points with 123 point out of a possible 125, and were also placed first in the Ringcraft section, and 2nd equal in the Skill-a-thon.  All round this was a very positive and skilled performance from the three girls. The Limoholicks, sponsored and supported by the North West Midlands and North Wales Limousin Club, and in the form of Emma Rathbone, Matthew Clark and William Nicholls, finished a very respectable ninth after a difficult start with two replacement animals at the last minute. 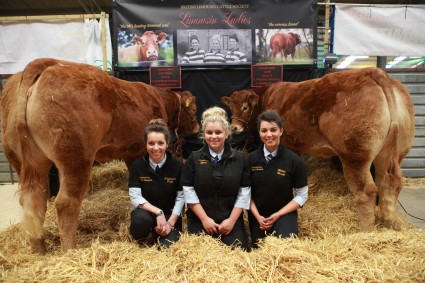 The event brings together teams of three participants, where one team  member must be under 18, to use teamwork and practical skills over six disciplines; Clipping and Preparation, Presentation and Promotion, Stockjudging (including reasons), Ringcraft, Interview and a skill-a-thon.  The teams need to plan and prepare a promotional stand, together with the area for stalling two cattle that they later use to demonstrate their Clipping, Preparation and Ringcraft skills.  Each group must work as a team for all aspects of the competition and their ability to do this is continually assessed over the two days.

Promotional stands are marked on the quality of the breed or sponsor information, but also on relevant information about themselves.  Arrival on the Wednesday morning was followed by several hours of graft to unload, plan and erect both the promotional stands and make the stall ready for the arrival of cattle.  The stockjudging took place from 4pm on Wed 23rd and consisted of six animals, where two had to be nominated for discard.  One set of reasons were provided for each team.  The clipping and preparation section was judged by Jimmy MacMillan and Fraser Cormack, who had the unenviable task of getting through the finer detail of separating the teams based on a set of criteria.  The animals were then presented as a pair in the ring by two members of the team, while the other gave a short interview.  The ringcraft was judged by Mark Phillips, which again was challenging as it had an extra element of judging the handlers as a pair.  The skill-a-thon consisted of a set of 25 questions on general agricultural knowledge and was completed as a team.

Huge congratulations to the all the teams, but especially to the Limmy Lads for their win – off to Canada in November! 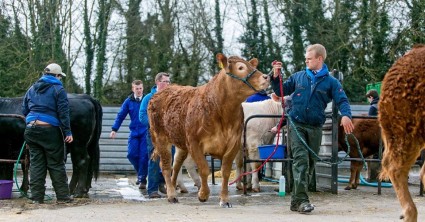 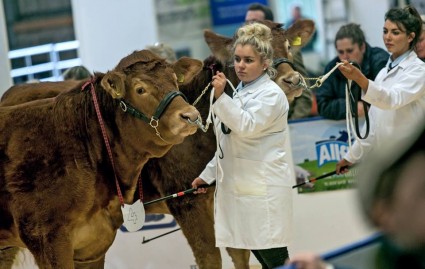