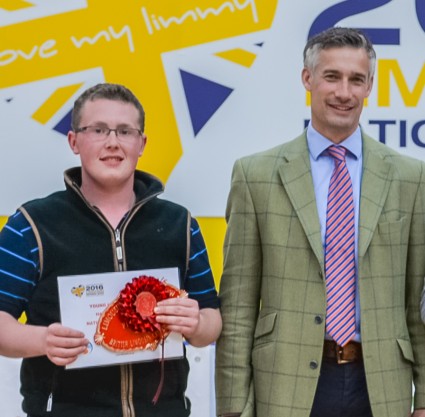 Amidst an action packed day at the 2016 National Limousin Show on Friday 29th July at Carlisle’s Borderway Mart, John Graham, Mains of Burnbank, took the top award in the Young Limousin Breeders competition.

Throughout the day Young Limousin Breeders were involved within the pedigree Limousin classes exhibiting stock in their own right, helping the family team, or showing an animal for an exhibitor.  At ringside the competition judge, Dorinda Dixon of the Roughley Herd, Sutton Coldfield, West Midlands, scored the Young Breeders for a combination of their presentation, appearance, handling skills, and showmanship.  The Young Breeder competition was kindly sponsored by Phil Halhead of Norbreck Genetics.

A fine turnout of 22 Young Breeders entered in all and in a very closely contested competition it was John Graham who was given the first prize and the title of 2016 National Limousin Show Champion Young Breeder.

Commenting on her Champion, and all of the Young Breeders competing, the judge Dorinda Dixon said:  “John handled the animals he was involved with extremely well throughout the day and in different situations.  He was very consistent in his ability and his presentation skills and smart appearance were really first class.”

“There was little to separate the placed Young Breeders and all of the young exhibitors are to be congratulated for the very high standard of ability and showmanship.  The atmosphere in the show hall was excellent throughout and the involvement of the Young Breeders very much added to the day.  From what I could see it is clear that the Limousin breed has some excellent young breeders coming through for the future”.

A familiar face in Young Limousin Breeder and Young Farmer events John Graham was the winner of the prestigious 2015 Highland Show Stockman of the Year.  Earlier this year John teamed up with Andrew Adam and Thomas Illingworth to win the 2016 National Young Show Stars event at Malvern.  As their prize for that the lads will jet off to Canada later this year.  A strong Limousin breeder and supporter, the family farm at Mains of Burnbank is also home to 1000 sheep, of which 40 are pedigree Blue Faced Leisters and owned in conjunction with his brother James.

For winning the 2016 National Limousin Champion Young Breeder title John picked up a commemorative plaque and rosette on the day and a tidy cash prize is in the post!  Adding further to his day John Graham was at the halter as the herd’s homebred heifer Burnbank Jlo picked up a red rosette for heifers born between 1st July 2014 and 31st December 2014.  Burnbank Jlo is a Loosebeare Fantastic daughter and is out of Burnbank Geri.

Speaking afterwards Young Limousin Breeders Chairperson Stephanie Dick, Westerton of Cowie, Stirling said: “The 2016 National Limousin Show was a great success for all involved in the breed both young and old.  The cattle in the show were terrific and I feel that it is an inspiration to the young breeders for the future to keep up such a high standard and to come back to win top prizes next time round.”

“I was really delighted that there was such a number of young breeders taking part.  This made for very strong competition, and to have some new faces competing and joining the club from all parts of the UK is great to see. The atmosphere from the show was second to none and the support for the Young Breeders in the raffle and throughout the day was fantastic and greatly appreciated.”

“We hope to continue to raise the profile of the YLBC and continue taking the club forward with new ideas and more exciting competitions and I’d like to thank the Society for their support and for the continued backing that we receive.”

In the weeks running up to the National Limousin Show and during the day itself the Young Breeders had been selling raffle tickets in a self-initiative to boost club funds.   After a busy day at the show more than £1100 worth of tickets had been sold, a fantastic effort.  The draw was made in the main show ring and the main lucky winners were:

With exhibitors and visitors at times sweltering in the heat of the show hall a well-placed Pimms and general bar ticked all the boxes for many through the day.  Again a share of the takings on the day was generously donated to the Young Limousin Breeders Club.

Congratulations are extended to all of the Young Limousin breeders and everyone involved with the Club around the 2016 National Limousin Show.  Very much the future of the breed the Young Breeders represented themselves so well on the day and were a high profile and vibrant part of a memorable day.