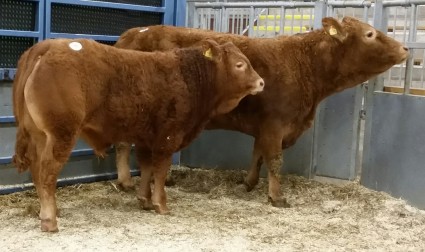 The sale of the entire Ellesmere Limousin herd at Welshpool Market took place on Friday 6th January 2017 on behalf of Messrs AHM Lea & Son, Lee Bridges Farm, Ellesmere, Shropshire. What was classed as a major reduction sale was in effect a dispersal of the Ellesmere herd but with the family wishing to retain the Ellesmere prefix for family sentiment. The Lea family have been loyal, long supporters of the Limousin breed having establishing the herd back in 1972.

Heading up the sale was the outfit Ellesmere Ida and her bull calf Monty selling as a combined outfit for 4,500gns to RW & CS Richards, Park Farm, Craswell, Hereford. Ida, a January 2013 born daughter of the sire Uskudar is out of a Brockhurst Marshall bred mother Ellesmere Roxette. She sold with her 10 month old bull calf Ellesmere Monty who is sired by another French sire Donzenac. Ellesmere Ida was sold back in calf to the homebred herd sire Ellesmere Hugo, who is sired by the easy calving bull Chytodden Conan.  By the close of the sale 61 Ellesmere Limousin animals sold in all to gross £152,955.

Second best price on the day went to another combined outfit in the shape of Ellesmere Givale and Ellesmere Margo who sold for 3,750gns. First to sell was Givale who is sired by a homebred sire Ellesmere Byron and out of a Goldies Tango sired dam Ellesmere Civale. Sporting top 1% EBV figures for milk and maternal value she sold for 2,700gns to CP Goulding, The Yews, Park Lane, Penely, Nr Wrexham and was back in calf to the homebred sire Ellesmere Hugo. Her April 2016 born heifer calf Ellesmere Margo, sired by Ellesmere Hugo, then sold for 1,050gns to JJ Price & Co, The Farm, Glynbrochan, Llanidloes, Powys.

The heifers sold to a top price of 3,000gns for the maiden heifer Ellesmere Lenny, a March 2015 born daughter of Chaumeil and out of the Uskudar bred daughter Ellesmere Horgeous. She sold with EBV’s in the top 10% of the breed and was purchased by an undisclosed buyer.

The young bulls on offer topped at 3200gns for the last entry of the sale, Ellesmere Lost, a May 2015 born son of the herds stockbull Ellesmere Hugo and out of the Castleview Virulent sired dam Ellesmere Findy.  Displaying EBV’s in the top 1% of the breed with not one of the figures below average he went on to sell to Powell Partners, Upper Newton Farm, Vowchurch, Hereford.