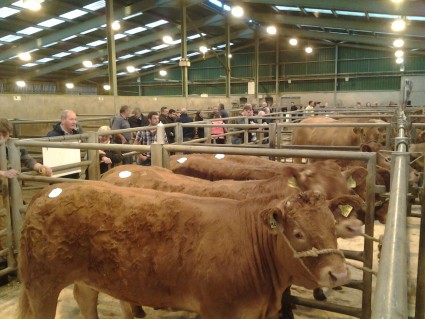 The N.I. Limousin Club held their annual sale of haltered and unhaltered females at Hilltown Market on Monday 28 August 2017. 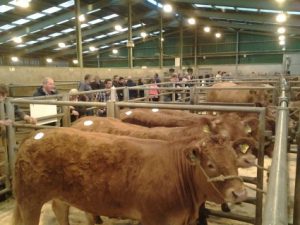 The sale was extremely well supported, a packed sales ring returned a clearance rate of 84%. A total of 27 of the 32 females presented for sale were sold to an average of £1,418 per head.

Top price of 2,200gns went to a home-bred cow and calf unit from Messrs D G Green and Sons, Lisburn. The June 2013 cow Derriaghy Isabel had her April 2017 born heifer calf by Swardland Eddie, Derriaghy Nancy at foot. Isabel is sired by Derriaghy Enfield, who was jointly purchased at Carlisle for 22,000gns by Emslies Livestock and S D Irvine and Sons of the Anside herd in October 2010. Enfield is by Broadmeadows Cannon and out of the Nenuphur daughter Lenagh Utopia. Isabel was AI’d in late July to Homebuyers Visitor and Stockdales Muscular. They pair was knocked down to Fred and Ruth Gibson, for their Alshar herd in Portglenone.

Second best price of the sale was 2,000gns for another a cow and calf pair, this time from Jim Quail, Banbridge. Urbaine is a great breeding French cow and her May 2017 born twin heifer calves Lynderg Norma and Lynderg Nifty are sired by Lynderg Hero.  They head to their new owner Neville Rodgers, Ballynahinch.

Close behind at 1,900gns was another pair from Messrs D G Green and Sons. The January 2010 born cow Derriaghy Fancypants is sired by Haltcliffe Vermount and her April 2017 born bull calf by Huntershall Gladiator. Fancypants was AI’d in early May to Ampertaine Commander. The pair was knocked down to Mark McKinstry, Belfast Road, Nutts Corner for his Ballyaulkin Herd.

Home-bred by T J Adams, Banbridge Fedneyhouse Matilda sold for 1,750gns. Matilda is a May 2016 born heifer is sired by Aghadolgan Illustrator, who is in the top 1% carcass traits in Genotyping. Matilda’s dam is Fedneyhouse Iza.  She went home with Philip Broome, Ballynahinch.

Selling for 1,700gns to G Rodgers, Dromar was Fedneyhouse Melody, a May 2017 born heifer out of Fedneyhouse Goldie and also sired by Aghadolgan Illustrator. At the same price was Aghadolgan Mossie, bred by R A G Savage, Drumahoe.  This May 2016 born heifer is sired by Ampertaine Foreman, who went through the ring at Carlisle in February 2012 for 38,000gns.  She is out of Craigatoke Unbreakable a Goldies Oswald daughter. Mossie now heads to her new home with N McCormilla, Monaghan.

The N.I. Limousin Cattle Club would like to thank the auctioneer on the evening Mark Stewart and Hilltown Market for the use of their facilities