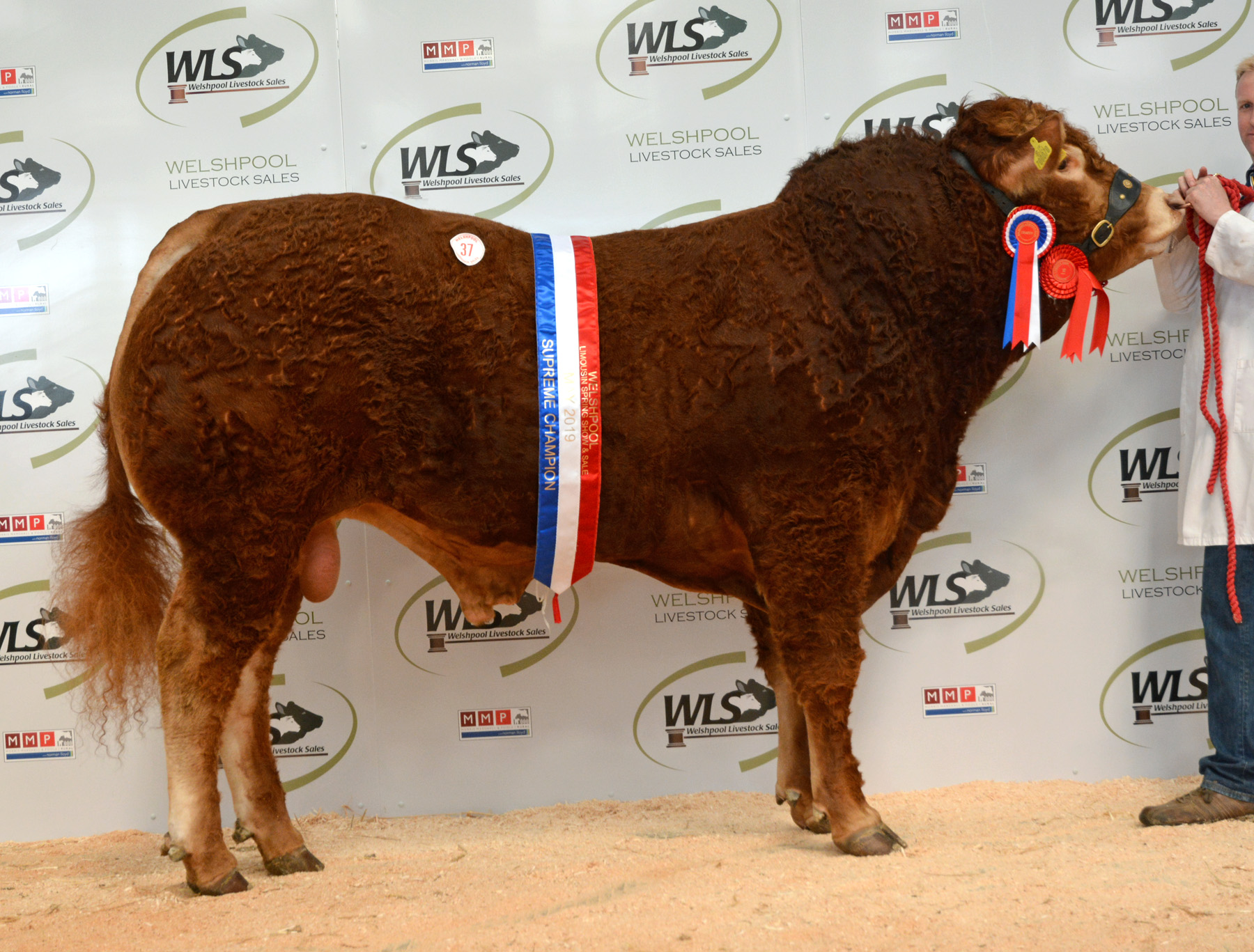 Topping the sale at the North West Midlands & North Wales Limousin Club spring show and sale at Welshpool Mart on Thursday, 16th May at 6000gns was the Overall Champion Calogale Navara from GJ Lee and CM Lloyd, Kidwelly, Carmarthenshire.

This August 2017 born bull won his class, the Senior Championship and went on to be judge Nia Griffith’s pick for the Overall Championship at the pre-sale show. Navara was sired by Trueman Jagger and out of the Wilodge Vantastic daughter Dinmore Helebore who was purchased for 12,800gns. The successful bidder on this occasion was Messrs Massey from Offerton, Stockport.

Two bulls sold for 4500gns, the first of these was CV Lewis & Son’s Garyvaughan Ninky who was purchased by Aston Hall Farm, Montgomery. Ninky was sired by Plumtree Deus and out of Garyvaughan Jinky.

Also at the same money was Garnedd Nevis from KI, E & HI Jones’ Betws-Y-Coed based herd. Nevis, sired by Garnedd Junior, had won 2nd prize in his class at the pre-sale show and went on to be purchased by Messrs Thomas from Llanddeusant.

Messrs Jones also sold another bull, Garnedd Nudge for 4200gns. Nudge was sired by Trueman Idol and out of the easy calving Garnedd Irene.  He was purchased by Messrs Cox from Arthog, Gwynedd.

GW Jones’ Aldan Nobby sired by Wilodge Goldcard and out of Aldan Gladys sold for 4000gns. Nobby had won 1st prize in his class at the pre-sale show and the successful bidder was Messrs Morris from Oswestry.  The Junior Champion and Reserve Overall Champion Esmors Neru from DE Evans also went for 4000gns. Neru is a son of Trueman Jagger and out of the imported Fugitive.

The dispersal sale of Miss Anne Thompson’s Tunnelby herd, Onneley, Nr Crewe,  created a lot of interest with the top price female coming from this consignment. Tunnelby Matiana sold with her Lodge Hamlet sired heifer calf at foot Tunnelby Pollyanna to top the section at 6000gns. Matiana, a 2016 born cow was sired by Chytodden Conan and out of the Fieldson Alfy daughter Tunnelby Harayana. The outfit was purchased by Messrs Simms from Holmes Chapel.

Messrs Jerman from Trefeglwys, Caersws paid 3500gns for another from the Tunnelby herd, Tunnelby Lorelei sired by Titantic and out of Tunnelby Harayana sold with her bull calf Oykel again sired by Lodge Hamlet.

The best of the females out with the dispersal was the 2016 born cow Goldies Marion consigned by Messrs Lee & Lloyd. Marion was sired by Cloughhead Umpire and out of a Wilodge Vantastic daughter Goldies Fragrance, she was purchased from breeder Bruce Goldie at the Red Ladies Derby Sale in 2016 and sold again here with her Dinmore Goldeneye sired heifer calf at foot for 3400gns.