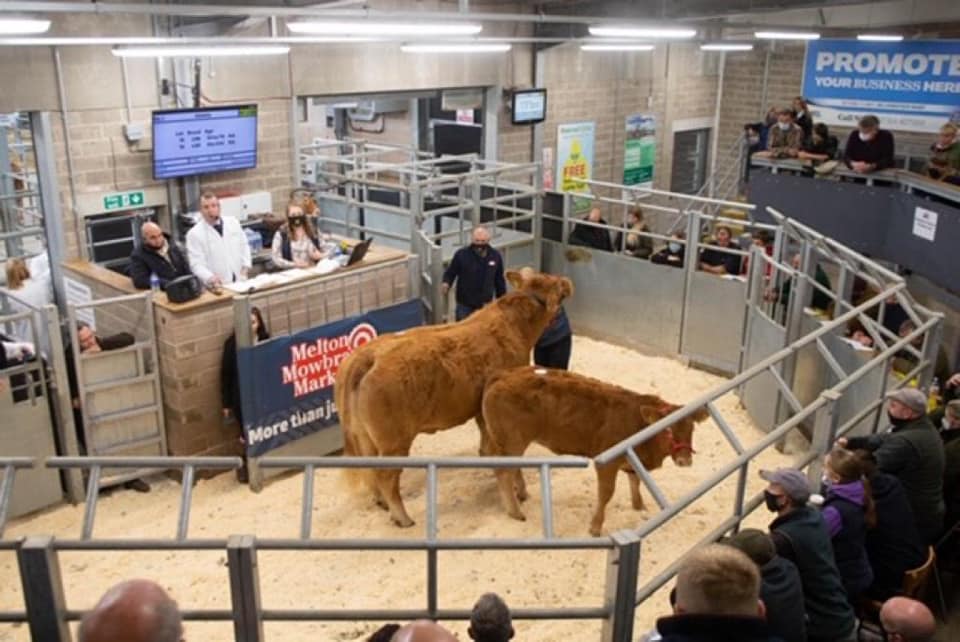 A fantastic crowd of buyers from far and wide gathered for this important sale in the Limousin calendar, a superb show of quality cattle were presented and a pleasing 97% clearance was achieved as cattle regularly sold beyond expectations.

Bulls
The days leading bull was Lowgate Power from Mr Ian Brown, Lincolnshire; a tremendous January 2019 born bull sired by Greensons Ural with his Dam being Lowgate Milly herself a daughter of Sportsmans Ferguson, he sold to Messrs G H Williams & Son of Powys for 4000 guineas.

Following at 3500 guineas was an April 2018 born bull from G J Lee & C M Lloyd of Carmarthenshire; Calogale Ouzo sired by the French bull Bial and out of Goldies Comet daughter CalImage Izzy he sold to Mr L J Stmaper, Huntingdon.
At the same price was April 2019 born Dinmore Premier from Paul Dawes of Hereford; full brother to the 140’000 guinea Trueman Jagger he is sired by Wilodge Vantastic out of Trueman Grazia, he headed home with William Clark Livestock Ltd, Norwich.

Females
A scintillating trade for all females was headed by Absolute Honesty (main photo) from Richard Bartle & Mary Cormack of Hereford. The 2012 born Honesty is sired by the renowned Wilodge Vantastic and out of the 42000 guinea Newstart Upsydaisy, she had with her a stunning January born heifer calf Absolute Rhapsody who is sired by Dinmore Lionheart, Honesty is again back in calf to Lionheart and also sold to William Clark Livestock Ltd for 5500 guineas. A fine day for the Absolute herd as Honesty’s full sister the 2014 born Absolute Jezebel with her January born heifer calf Absolute Rebel, also by Lionheart and also back in calf to Lionheart sold for 5000 guineas to J N & W Nichols, Draycott-in-the-Clay.

Chris White followed closely behind with Frogmore Louise, full sister to the Royal Welsh Interbreed Champion Frogmore Helen, Louise is a 2015 born daughter of Wilodge Cerberus out of Ironstone Frangelica, she sold with her April born heifer calf Frogmore Rosie at foot by Ampertaine Majestic for 4500 guineas to Ian Snape, Sanbourne, Redditch, Louise is PD’d back in calf to Mereside Lorenzo. The Frogmore herd were again selling well as Frogmore Milan a 2016 born daughter of Foxhillfarm Irishlad out of French cow Valentine sold for 4000 guineas again to William Clark Livestock Ltd, Milan was PD’d in calf for March 2021 to Mereside Lorenzo. At the same price another from the prolific Frogmore outfit as Frogmore Nessie a 2017 born daughter of Gerrygullinane Glen out of the Royal Welsh winner Frogmore Helen was also in calf to Lorenzo and headed north with Mark Phillips of Castle Douglas.

Chipping in at 3800 guineas was another Frogmore beast, this 2018 born heifer Frogmore Odell was consigned by the aforementioned Messrs Lee & Lloyd, Carmarthenshire; a daughter of the 140,000 guinea Trueman Jagger and again out of the successful Frogmore Helen this exceptionally well bred maiden heifer sold to Mr L J Stamper, Huntingdon. The Lee & Lloyd partnership produced another cracker at 3000 guineas, Calogale Orbit a 2018 heifer sired by Wilodge Cerberus out of Millington Lapwing she sold to Messrs H D & P J Cranfield, Lincolnshire. Back to the Frogmore success story for another at 3000 guineas as Chris White produced in calf cow Frogmore Lupin a 2015 Wilodge Cerburus daughter out of Ironstone Frangelica, she is due to Mereside Lorenzo in April 2021, this one headed away with Ian Snape of Redditch.

Cross bred cattle sold extremely well with Neil Hodgson, Southwell selling Limousin 10 month old cross steers to £1380, £1200 and £1180; Newbury based Stratton Farms sold 9-11 month old heifers to £1030 averaging £1005 for their run of 10. Out with Limousin genetics Richard Bartle and Mary Cormack, Hereford sold two French bred Aubrac cross 1st calvers, one with a Wagyu cross calf at foot and the other with an Aubrac calf, they sold at £3200 and £3800 respectiovely to Norfolk based Clarke’s Livestock Ltd.