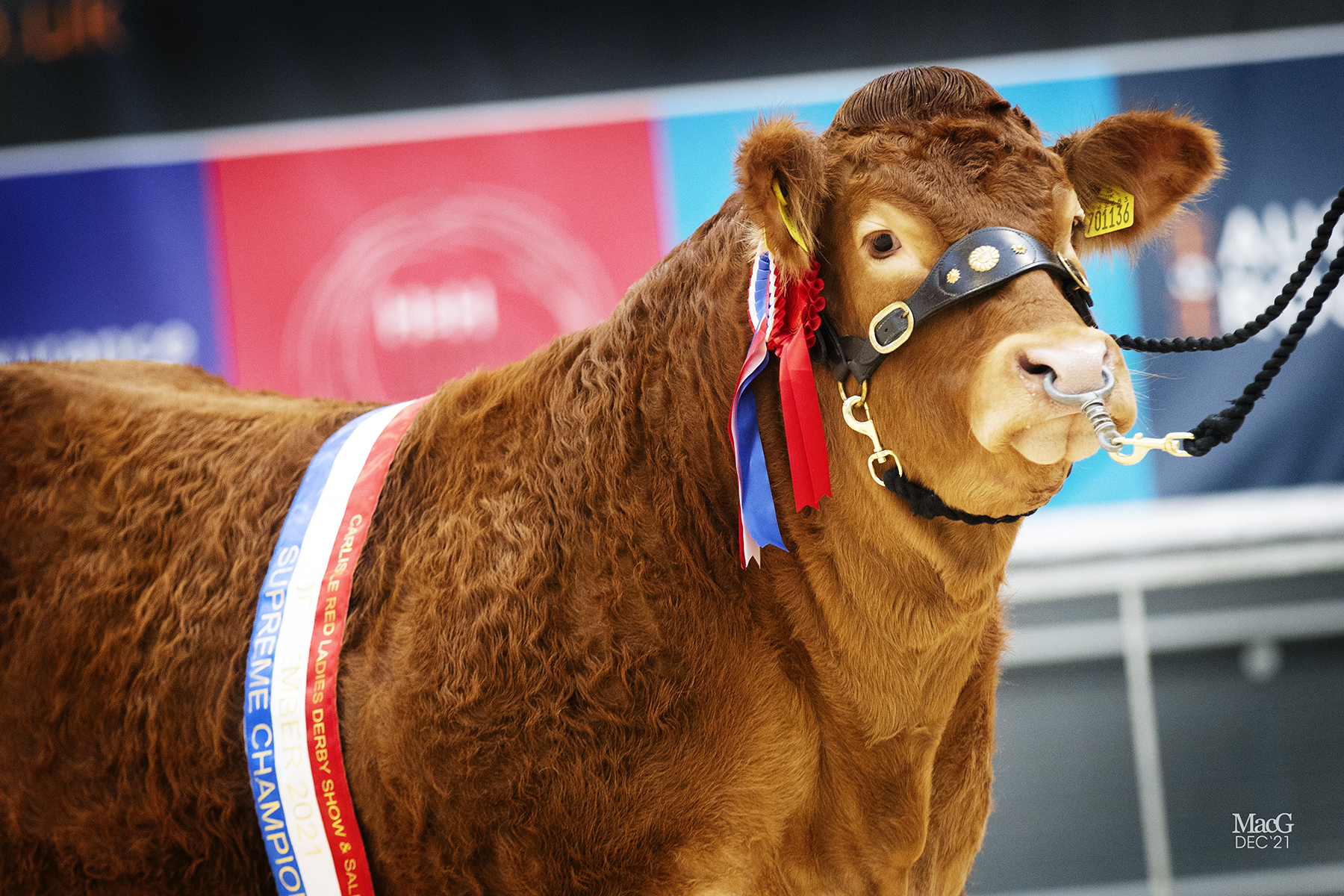 On Friday 10th December 2021, a crowd of pedigree and commercial breeders alike herded to Borderway Mart, Carlisle for the annual gathering of the Red Ladies Derby. Christmas spirits were high for the last Society sale of the year, attracting a large gathering for both the show and sale. The Red Ladies Derby saw an average of £4,565.55 for 54 heifers. Five of the top class heifers exceeded five figures. The Weaned Calf Sale saw an average of £3,068.33 for nine bull calves and £3,227.77 for 27 heifers.

Breed Secretary, Will Ketley commented “‘It was good to be back to a busy and buzzing Borderway for the Red Ladies show and sale. An increased entry showing this fixture is a desired event from the membership, thanks from the society to all members for their support. Some outstanding heifers being shown under the lights in the exhibition hall that continued into the ring to achieve the top prices. In keeping with the rest of the year confidence in the Limousin female continued today. The weaned calf section again saw extremely strong returns for members for both young bulls and females. Thank you to all members, underbidders and purchasers that make this event a success.”

Grahams Ruby was the first to go under the hammer for 20,000gns after winning her class and later crowned overall female champion in the show, travelling down from Stirling with R and J Graham for the event. This tops off a very successful  The January2020-born heifer Ruby is the first daughter to be offered for sale from the interbreed champion of the 2018 Royal Highland Show, Grahams Niaomi. Sired by the renowned AI bull, 32,000gns Ampertaine Elgin, a son of Glenrock Ventura. Carrying myostatin of NT821 and Q204X and a beef value of LM41, this places Ruby in the top 10 percent of the breed. Ruby was the jewel in the crown for Mary Cormack, who takes her home the Restart herd based in Hoath, Canterbury.

Huntershall Rowena was also knocked down at 20,000gns, brought forward by Stephen Nixon, Wigton, Cumbria. Rowena is an August2020-born daughter of 32,000gns Millgate fame and out of Dinmore Luxurious who has a French dominated pedigree and is one of the two flushing cows at Huntershall .  Rowena carries two copies of the NT821 myostatin gene. Rowena heads across the water to County Down with her new owners Mr P McKeag and Ms C Ferris who purchased her in shares.

Hot on their heels at 15,000gns was Whinfellpark Royalty bred by Messrs Jenkinson, Penrith, Cumbria. Royalty won her class and went on to be crowned Reserve Female Champion to the joint top price heifer, Ruby. The September2020-born heifer is a daughter of Gunnerfleet Lion and out of homebred cow, Whinfellpark Flair, who also bred Royalty’s full brother, Whinfellpark Poldark who went under the hammer for 18,000gns in May 2021. Displaying an impressive beef value of LM50 and carrying myostatin of F94L and Q204X. Royalty was the top choice for the Seisiog herd, purchased by Mr Jones, Llanrwst, North Wales.

Going under the hammer for 14,000gns was Spittalton Ravenelle, bred by  J Burnett, Blair Drummond, Stirling. The December2020-born heifer is a daughter of Ampertaine Opportunity, who was purchased for 40,000gns in shares between Newhouse, Goldies and Spittalton. Out of the homebred cow Spittalton Nigella. Ravenelle carries myostatin of F94L/F94L and a beef value of LM34.

Another heifer from Stephen Nixon and the aforementioned Huntershall herd to make the leaderboard was Huntershall Rachelriley, achieving 12,000gns. The July2020-born heifer is a full sister to Rowena who sold earlier in the sale for 20,000gns, sired by Millgate Fame and out of Dinmore Luxurious. A beef value of LM41 and myostatin of NT821 and Q204X, Rachelriley was the star of the show for A & J A Iveson, Hawes North Yorkshire heading to the Eastshaw herd.

Going under the hammer at 8,000gns was Bangtidy Rosegold, brought forward by Mr A Hyslop, Kippen, Stirling. The January2020-born Ampertaine Foreman sired heifer is out of Ironstone Madam, who also bred Bangtidy Ralphlauren who sold for 8,500gns in Stirling this October. Rosegold carries two copies of the F94L myostatin gene and a beef value of LM48. This heifer was the golden ticket for Paul McArdle taking her across the water to Co Monaghan.

Another heifer bred by Stephen Nixon, Wigton sold for 7,000gns, Huntershall Roslyn. Roslyn is a July2020-born Huntershall Gladiator daughter, the first daughter to be offered for sale from Baliea Juniorchamp.  Roslyn carries myostatin traits of F94L and Q204X. Another heifer heading across the water, Roslyn was purchased by Mr M McKinstry, Crumlin, County Antrim.

Going under the hammer for 5,000gns was Everpark Ripple from J and T Waring, Everingham, York. The April2020-born Mereside Lorenzo daughter is out of Mcinnes Jean. Ripple carries a beef value of LM30 and a myostatin of F94L and NT821. Ripple now calls the Guards herd home with Messrs J C & S E Little, Ireby, Wigton.

Annanview Ree was knocked down for 4,800gns, brought forward by Kevin Watret, Annan, Dumfriesshire. The October2020-born heifer is a daughter od Irish bred bull, Gallaway Midland and is out of Tweeddale Harika. Ree carries myostatin of F94L and NT419. Ree stays in Scotland, purchased by Mark Ross, Gorebridge, Midlothian.

Again achieving 4,800gns was Garrowby Rhubarb from Garrowby Farms, Bugthorpe, York. The October2020-born heifer id sired by Gunnefleet Hicks and is out of Gunnerfleet Mrslocks. Rhubarb carries myostatin of F94L and NT821 and a beef value of LM30. Rhubarb was a sweet choice for Jonathan Hick, Howden, Yorkshire.

Topping the trade was Sarkley Sabella who went under the hammer for 18,000gns, bred by E H Pennie and Son, Montgomery, Powys. The April-2021 born heifer is one of the first crop of calves sired by homebred bull, Sarkley Osprey, and is out of Sarkley Orabella, a daughter of Plumtree Fantastic. Sabella has a beef value of LM40 and myostatin of Q204X/Q204X.  Sabella was the cream of the crop for the Wilodge herd who take her home to Shifnal, Shropshire.

Going under the hammer for 7,000gns from M and J C Gould, Bomere Heath, Shrewsbury was Woodmarsh Sovereign. The January2021-born heifer was sired by Wilodge Cerberus and Wilodge Naturelle. Carrying myostatin of F94L and Q204X and was purchased by I Robb, Omagh.

Goldies Sarah is next in the stakes at 6,500gns from B T Goldies, Mouswald, Dumfries. This March2021-born Carrickmore Maximus sired heifer is out of Goldies Oriana. Sarah carries myostatin of Q204X and NT821 and a beef value of LM28. Sarah was purchased by Messrs Little of the Guards herd, Wigton, Carlisle.

The highest priced bull calf was Ritchies Seryl from A Ritchie, Whitecairns, Aberdeenshire. Seryl is a January2021-born bull calf sired by Ampertaine Elgin and out of Emslies Ieryl, the herds foundation cow. Seryl has a beef value of LM30 and carries myostatin traits of NT821 and Q204X. Seryl has had a successful show season, winning Reserve Junior Male at Stars of the Future and his bull calf class in the weaned calf show, Seryl was a winner in the eyes of G, H and C Davies, Felinfach, Brecon, Powys.

Going under the hammer for 4,200gns was Sarkley Sally from E H Pennie and Son, Montgomery, Powys. Sally, an April2021-born heifer is sired by Sarkley Osprey and is out of homebred cow Sarkley Nalani. Carrying a beef value of LM42, this heifer also carries myostatin traits of F94L and NT821. Sally now calls Maybole home with M and F Burns of the Shaws herd.

Beachmount Sammy hit 3,500gns from Clive Knox, Hume, Kelso. Sammy is a March2021-born Rogans Poseidon sired bull calf out of homebred cow Beachmount Odessa. Sammy carries myostatin of double F94L and a beef value of LM27. Catching the eye of both D C and KL Hutchinson and T W Hutchinson who purchased him in shares and take him home to Barnard Castle.

Sarkley Sasha scored 3,500gns from E H Pennie and Son. Sasha, the May2021-born Trueman Idol daughter is out of homebred cow Sarkley Isadora. Sasha carries two copies of the Q204X myostatin and was purchased by A and J A Iveson, Hawes of the Eastshaw herd.