The British Limousin Cattle Society has announced its plans for the 2011 year to mark the 40th Anniversary of the Limousin breed in the United Kingdom and the establishment of the Society. Speaking from the Society’s headquarters at the National Agricultural Centre, Stoneleigh, BLCS Chairman, Jim Bloom, outlined the special events and promotions planned to celebrate the anniversary year.

The centrepiece of the year will be a Limousin Weekend of high profile activity kicking off with a National Limousin Open Day on Friday 29th July at the Haltcliffe pedigree herd of Messrs Ridley, Haltcliffe, Hesket New Market, Wigton, Cumbria. One of the UK’s foremost Limousin pedigree herds numbering 100 head, the Ridleys have bred both of the highest priced pedigree beef animals ever sold at auction in the UK: the 100,000gns Haltcliffe Vermount and the 72,000gns Haltcliffe DJ respectively.

Visitors will be able to see the influence of the herd’s famous stock bull Sympa, along with Cloughhead Umpire and more recent purchases Procters Commander and Cloughhead Ernie. The Haltcliffe herd was re-established in 2001 post-FMD and the breeding lines through the herd of Renoncule, Romance, Perle and Radio will be on show to visitors. The Haltcliffe pedigree Texel flock of 100 ewes and the 280-strong Swaledale hill flock will also be on display and will be an integral part of the day.

The following day, Saturday 30th July, a National Limousin Show will be held in the new Exhibition Hall at Harrison & Hetherington’s Borderway Mart, Carlisle. Classes and Championships will cover both pedigree and commercial Limousin cattle with the expectation being that over 400 head of cattle will be entered. In announcing the show, Jim Bloom said, “the show schedule is very inclusive with the emphasis being firmly on progeny, production, and commercially relevant cattle. A National Limousin Show is a much anticipated event and quite special in the respect that it is not held every year. It is sure to be a tremendous spectacle”.

Judging the pedigree section is the well-known Welsh breeder, Mr Aled Edwards, who is also presently the World Limousin President and a past Chairman of the BLCS. Mr Edwards farms at Home Farm, Cilycwm, Llandovery, Carmarthenshire and runs the 80 cow- strong Dyfri Herd. With a wealth of Limousin judging experience Mr. Edwards has previously judged at the Royal Highland Show, Southern Ireland’s Ploughing Match, the French National Limousin Show, and Carlisle Bull Sale.

The Commercial Cattle Judge is Mr Alistair Graham, Madden Rd, Tandragee, Co Armagh, N Ireland who runs the Madden pedigree Limousin herd numbering 60 cows. Also no stranger to Limousin judging rings, Mr Graham has previously judged at the 2006 Great Yorkshire Show, 2008 Royal Show and at Society bull sales in Perth and Carlisle respectively. He will also be judging the Limousin classes this May at the Royal Ulster Show.

As well as the Championship titles, exhibitors will compete for a share of the £20,000 prize fund with a £1000 prize for the respective Pedigree and Commercial Champions on offer. The Cheshire-based AI company, Cogent Breeding Ltd, and IGENITY, the DNA parentage and genomics provider, have been announced as mainline sponsors for the weekend. In announcing the planned Limousin events, Mr Bloom said: “The British Limousin breed has come a long way in a very short time and breeders should be very proud of its sustained position as the UK’s Number One beef breed. This planned weekend will celebrate that but the focus will be on showcasing the commercial attributes of the breed. The Society will use 2011 as a platform to build from for the next ten years and will in the year be announcing a sustained programme of high level investment in forward breed
improvement plans and initiatives.”

The weekend is expected to attract a large crowd of pedigree and commercial producers with a domestic UK audience supplemented by visitors from the Republic of Ireland and Europe. The European Limousin Federation, Eurolim, have announced that they are organising a visit around this weekend ensuring further representation from a number of European countries.

Other planned initiatives for the 40th Anniversary year announced by the BLCS include:

Farmers Guardian will act as the Media Partner for both the National Open Day and National Show. 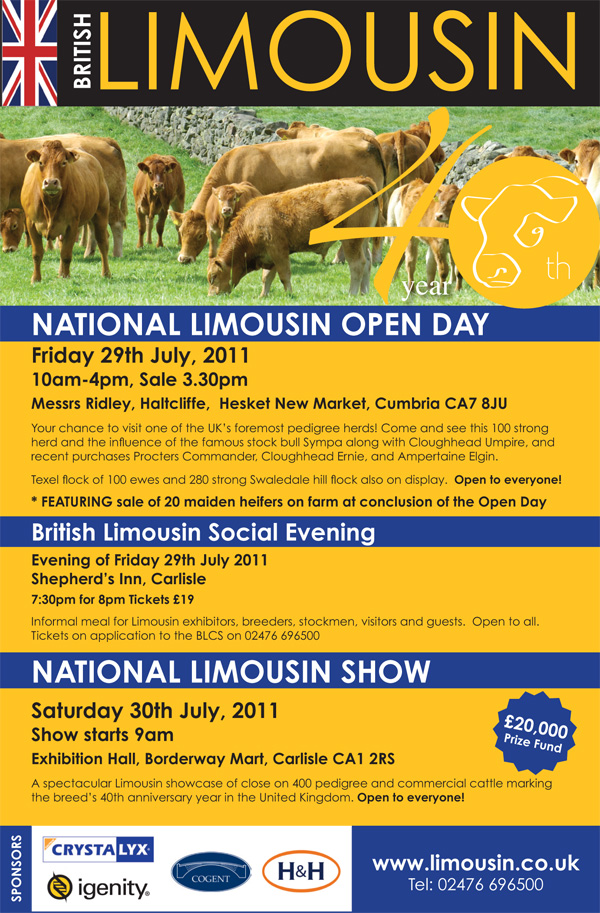