Details of the winning herds in the regional finals of the 2011 National Limousin Pedigree Herd Competition have now been announced by the British Limousin Cattle Society (BLCS).  The National Limousin Pedigree Herd Competition is a one-off unique event and is being held as part of the British Limousin Cattle Society’s 40th Anniversary promotional programme. Supported and sponsored by Pfizer Animal Health, this new event is an extension of the coveted annual herd competitions held annually within the nine Limousin regions around the United Kingdom.

The North Yorkshire Limousin herd of James & Sarah Cooper, Tomschoice Limousins, Hill Top Farm, Dacre are the North East regional herd competition winners and now go forward to the National Final. The North East region has over 220 registered members and the Coopers faced strong competition from within the area said James Cooper. “We’re delighted to have won the North East regional award and to be nominated nationally is a tremendous achievement. We have a small farm of 32 acres and run a herd of 25 Limousin cows and followers. Our breeding programme is therefore focused on producing top quality pedigree animals owing to the limited acreage involved,” he said.

Judging the regional element was Mr Gary Swindlehurst of the Procters Herd, Slaidburn, Lancs who commented: “The overall standard of the Tomschoice cattle is very good with particular attention paid to the quality of genetics, predominantly AI, being used purposefully and with good results across the herd. This is very much “quality over quantity” with a good understanding of what the market wants and where the Limousin breed is going. Particular attention is also paid to the high health status of the herd.”

“Pfizer is delighted to sponsor this major UKaward as part of the Limousin Society’s 40th Anniversary celebrations. The competition was originally open to all the Society’s 3,000 members and James & Sarah Cooper are very worthy representatives of the North East region,” Rob said.

The Coopers established the Tomschoice herd in 1996 and have achieved success in the show ring as well as at auction. Amongst several noteworthy homebred show winners are Tomschoice Elgar, the Great Yorkshire Supreme Male Champion 2010.

When the final judging is completed, the Overall Winner of the 2011 National Limousin Pedigree Herd Competition will be announced, by Mr Coleman, at a dinner being hosted by the British Limousin Cattle Society and Pfizer Animal Health in Carlisleon Friday 14th October.  The dinner, at the Shepherd’sInn, Borderway Mart, is being held on the evening prior to the Society’s 2011 October Bull Sale at Carlisle. 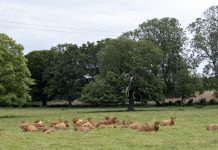 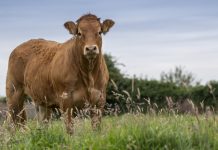