In what is one of the biggest attendances seen at a farm Open Day in the United Kingdom, close on 3000 visitors attended the 2011 National Limousin Open Day held at Messrs Ridley, Haltcliffe, Hesket New Market, Wigton, Cumbria on Friday 29th July.  The hugely anticipated day to Haltcliffe, home to one of the foremost pedigree herds in the country, did not disappoint with the quality of the cattle on display and the overall farm and herd management making a big impression on the huge crowd which comprised of pedigree breeders of all breeds, commercial beef producers, and international visitors from seven countries.  The crowd was bolstered with a heavy turnout of visitors from bothNorthern Ireland and the Republic of Ireland.

At the end of a memorable day an imaginatively constructed sale of Haltcliffe heifers, set indoors and within an electric atmosphere of over 1000 spectators and purchasers, saw top prices of 30,000gns and 20,000gns respectively and an average of over 8,000gns for the 20 heifers sold. 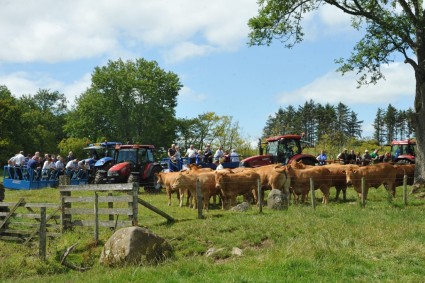 The National Limousin Open Day marked the start of the National Limousin Weekend of activity marking the 40th anniversary of theLimousin breed in theUnited Kingdom and the establishment of the British Limousin Cattle Society.  The weekend was continued on the Saturday with the staging of the 2011 National Limousin Show at the Exhibition Hall, Borderway Mart,Carlisle.

A hill farm on the Northern edge of the English Lake District, Haltcliffe was at its resplendent best as kind weather in the run up to and on the day itself showed the farm and the livestock to their best advantage.  The crowds started to roll in from 9.00am and were soon loading up on the fourteen tractors and trailers made available to tour the fields and view the herd that comprises of 100 cows and followers, 20 in-calf heifers, and 25 bulling heifers.  The tractor tours which ran from9.00am – 3.30pmtook visitors through seven fields in all.  Each field consisted of cows; cows with calves; in-calf cows; in-calf and maiden heifers; with the herds noted stock bulls Cloughhead Umpire and Cloughhead Ernie also on display.  The tour featured the heavy influence in the herd of Umpire along with the famous stock bull Sympa.  Spectators saw at first hand the quality of the herds females that have produced so many five figure price sale bulls sold to both pedigree breeders and commercial beef producers.  A particular comment of the day was how quiet and peaceful the cattle were as the big crowds wound their way through the fields with the stock unconcerned.  A few planned dry runs prior to the day had not materialized and this was the cattle’s first exposure to the trailers and the numbers!

Back at the farm steading, a high quality line-up of young bulls demonstrated at first hand the Ridleys stated intent to breed long, clean, pedigreeLimousinbulls with the good shape that the commercial suckled calf breeder is looking for and at the same time produce big and feminine heifers with class.  On the other side of the same shed the stock bulls Procters Commander and Coachhouse Delectable were also on display.

The day was officially opened by past BLCS Chairman Jim Bloom, who was also the organising committee Chairman and from France, Louis De Neuville the World President Emeritus of the International Limousin Council and the man synonymous with the breeds establishment and development to its present position within some seventy countries around the world.

In the early afternoon sale a huge and expectant crowd packed into the sale barn to create a remarkable atmosphere prior to the sale of the 24 lots on offer. Lot1 was the opportunity to buy the pick out of 23 nominated heifers offered.  The successful bidder would have the opportunity to make his selection at a suitable time.     The 23 heifers combined some of the best bloodlines in the herd including Sympa, Cloughhead Umpire, Renoncule, Haltcliffe Upperity, Perle, and Radio to name a few.  This mouth watering offer saw the bidding topped at 30,000gns by John Elliot, Roxburgh Mains, Kelso, Roxburghshire who runs the establishing Elliot pedigree herd.