Consigned by Robert & Jean Graham, Airthrey Kerse, Bridge of Allan, Stirling, the September 2009 born Grahams Ethel is by the 30,000gns sire Millgate Clinker, a Nenuphar son, and is out of the imported cow Agate. In the pre-sale show Grahams Ethel had picked up the Supreme Championship under Judge Mr Paul Byas, who runs the Middledale pedigree herd at Middledale Farm, Driffield, East Yorkshire.  Commenting, Mr Byas said: “My Champion was a very well-put together, clean, long and very correct heifer.” In July this year Ethel had stood second in her class at the 40th Anniversary National Limousin Show behind the eventual Overall Champion and had previously picked up a first prize ticket at Stirling Show together with a second place at the Royal Highland.  She was sold PD’d in-calf to the noted Grahams Alexander.

Staying true to the judging, the second top price of 9,500gns went to the Reserve Overall Champion, Millington Faberge from Millington Grange Estate, The Grange, Millington, York.  Decribed by the Judge as: “very beefy, long and a real cow-maker,” this maiden heifer, born in May 2010, is entirely homebred being by Millington Vascular, an Ideal19 son, and is out of Millington Amber whose pedigree features Wilodge Littlegem. She has been successfully shown, winning the 2011 Lincoln Show. The purchaser was Mr Ross Withers, Higher Tresawle Farm, Probus, Truro, Cornwall who, on the day, bought a total of six lots in establishing a new Limousin herd. This new enterprise will run alongside an existing pedigree British Blue herd, a commercial suckler herd and a butcher’s shop. Mr Withers had earlier purchased Grahams Ellen, a Grahams Alexander daughter, and out of Grahams Britney (by Grahams Unbeatable) for 4,000gns. With a Beef Value of LM+35, she was sold in-calf to Baileys Elderado, a Queenshead Altea son. 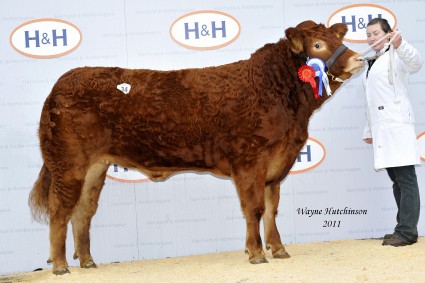 At 9,000gns was Melbreak Fairylight from Mr & Mrs J & A Callion, Shaneragh, Dromore, Co. Tyrone.  A July 2010 born heifer, Fairylight is by Wilodge Vantastic and is out of Lyvennet Paris who is also the dam of the bull Ashhollow Bombshell who sold for 14,000gns at Carlisle in 2007. Melbreak Fairylight is an embryo calf from the Melbreak prefix which was established in 2000 and currently numbers 4 cows. Embryo transfer work is used to increase the number of calves born in the year to around ten. This represented the top female price for the herd to date which previously stood at 8,000gns for Melbreak Dazzle, sold at the 2009 Red Ladies sale to Smiths of Bloxham.  A first prize winner here at the pre-sale show, Melbreak Fairylight was also part of the winning Regional Group of Three when joining up with Trueman Fantasia & Trueman Florence representing Northern Ireland. Melbreak Fairylight heads to Southern Ireland when selling to JB Browne, Carragh, Granard, County Longford.

The aforementioned Trueman Florence made 8,800gns when selling to the Calogale Herd of GJ Lee & CM Lloyd, Ger-Y-Coed, Four Roads, Kidwelly, Carmarthenshire .  Trueman Florence, who was consigned by H Savage & Sons, Altnamackin, Newry, Co Down, is another by Wilodge Vantastic and is a half-sister to Trueman Euphonium, the 2011 National Limousin Show Supreme Champion.  Florence is out of the Ronick Hawk-sired Trueman Song.

The first lot into the ring, the seven-year-old French-bred cow, Valentine, secured the next leading price of 5,000gns for JR McKeen, Hartlaw, Silloth, Wigton, Cumbria. By Titanic and out of Malaga, the 2004 born sixth calver was sold with her Haltcliffe Vermount-sired heifer calf at foot, Hartlaw Gazelle, to Mr C White for his Frogmore Herd, Moreton-In-Marsh, Glocs. Valentine was sold AI’d to Attirant.

Matching the 5,000gns bid was the maiden heifer Titchburn Flower from Donal Murray, Ballinarea Road, Cullyhanna, Newry, Co Down, N Ireland. The first daughter to be sold from the herd, which was the 2011 NI Herd Competition Small Herd Winner, she is by Cloughhead Umpire and out of the Lino daughter, Annadale Alana. Buyers were JH Tennant Ltd, Manor House Farm, Fraisthorpe, Bridlington, East Yorkshire for their Lissett prefix.

Mynach Foxy, a maiden heifer from ED Griffiths & Co, Cwmfelin-Mynach, Whitland, Carms made 4,700gns to Mrs S Field, Cornfield Farm, Cornfield Grove, Burnley, Lancashire for her Cornfield Herd. The red rosette-winning Foxy is by Kype Bomber and out of the Sable daughter, Mynach Vamp and carries a Beef Value of LM+29.

Following the Red Ladies was a sale of weaned pedigree bull and heifer calves which, combined with Red Ladies, grossed £222,227 for the day’s trading.

Video footage from the Show & Sale can be seen here