A red Limousin-cross homebred heifer from Christopher & Andrew Owens, Glantre, Pontsian, Llandysul, Ceredigion secured the Supreme Overall title at the 2011 Welsh Winter Fair held 28th-29th November at the Royal Welsh Agricultural Showground, Builth Wells. Again, Limousins dominated both the entries and awards here, underpinning the commercial strength of the breed with the Champion and Reserve later going on to sell for £4,500 and £2,600 respectively in the post-show auction. Approaching 30,000 people attended the two-day event. 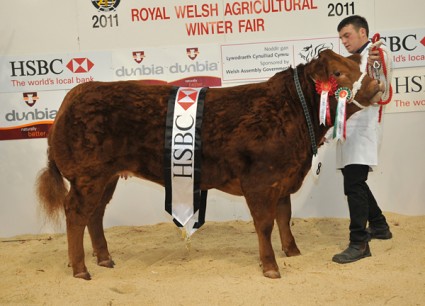 Described by championship judge and mid-Wales butcher Mr Alan Davies as “full of meat, deep in the loin, very showy and with a very good top – an ideal butcher’s animal,” the Owens Brothers’ June 2010 born Limousin heifer named Sinser had previously won the Baby Beef Championship at the National Spring Spectacular held within Beef Expo at Newark in May – her first time out. Sired by Derosa Vatican, a Sarkley Pepsi son, who was bought as a calf at foot by father Michael Owen, Sinser had also stood sixth in its class at the National Limousin Show in July and came through the Young Handlers’ class here inWalesto secure the Heifer Championship before finally taking home the Overall title. Scaling 538kg, she was purchased by the judge for £4,500 (or £8.36 per kilo). 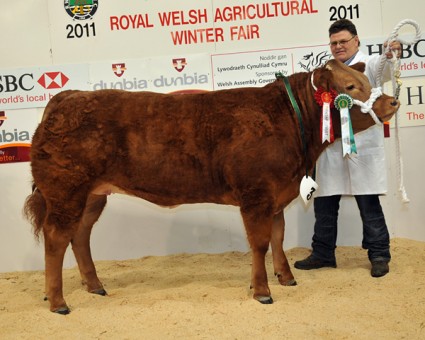 Following the Champion through to land the Reserve Overall award was the Reserve Heifer Champion in the shape of the 564kg Red Hot consigned by Dylan Hughes, Ty Cerrig, Ty Nant, Corwen, Denbighshire who came through three very strong classes of crossbred Limousin heifers. November 2010 born, Red Hot was purchased at the April Show Potentials Sale at Ruthin for £910. Bred by Messrs BL & JE Griffiths of Penygelly Limousins, Kerry, Newtown, Powys, Red Hot also features Sarkley breeding, being by Sarkley Dignity, a Fieldson Alfy son purchased at Brecon in November 2009 for 2,400gns, who is both easy calving and a consistent producer of show calves, according to breeder Brian Griffiths. Having stood Reserve Champion at Anglesey Show and third in its class at Borderway Agri-Expo earlier this year, Red Hot later sold for £2,600. 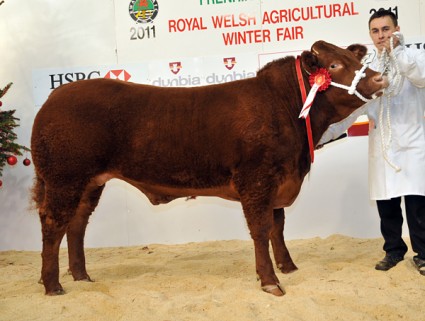 In the steer championships it was another one-two for Limousin animals. Steer Champion was the September 2010 born 528kg Mr Curly Whirly from Berwyn Hughes, Cwmhendryd, Lampeter. Exhibitor-bred, he is by Rhiwllech Carlsberg and is out of a Limousin-cross dam. 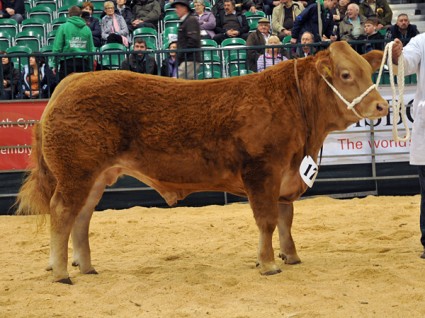 Reserve Overall Steer was the pedigree Limousin Powerhouse Frigate exhibited by BE Williams,Station Court, Sennybridge, Brecon. Bred by Colin & Wendy Phillips, the August 2010 born bullock is by Soleil and is out of Chatsworth Bridgit. Bought privately, his only previous outing had been July’s National Limousin Show where he had stood sixth in his class. The Powerhouse prefix enjoyed further success as breeder of the Reserve Pedigree Limousin Steer, Powerhouse Furrow, another by French bull Soleil and out of Marden Craryellew. This was the first show outing for this steer which was purchased by exhibitor TC Edwards, Pencraig Fawr, Betws Gwerfyl Goch, Corwen for £1350 at a Knighton store sale in April. 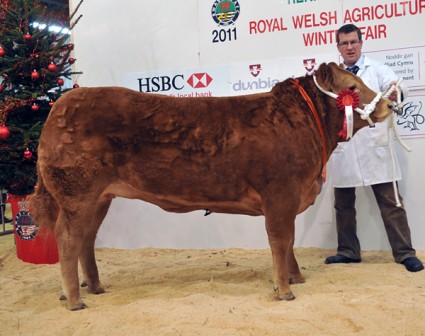 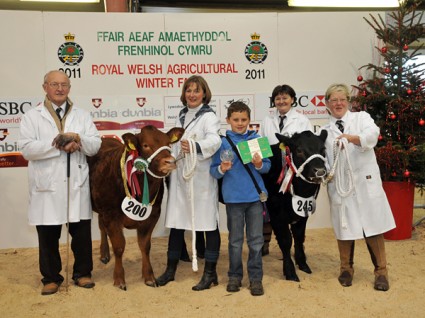 Further success came the way of Limousin breeding in the Baby Beef classes judged by Mr Frank Page, Lodge Farm, Elkington, Northants. Emily Jones, Coedmore Hall, Cellan, Lampeter scored a double hit when securing both the Reserve Overall and Reserve Steer titles with two homebred animals both enjoying their first trip out. Reserve Overall was the Limousin-cross heifer, Ace Girl, described by the judge as “a fantastic, sweet-looking calf with a lovely top.” Sired by Gunnerfleet Acebull, a Silex son purchased at Carlisle in October 2006 for 8,000gns, the 316kg Ace Girl is out of a Limousin-cross cow. By the same sire was the Reserve Steer Champion, Razzle Dazzle, a 320kg steer calf born in May 2011. 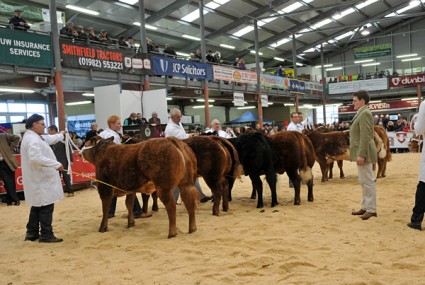