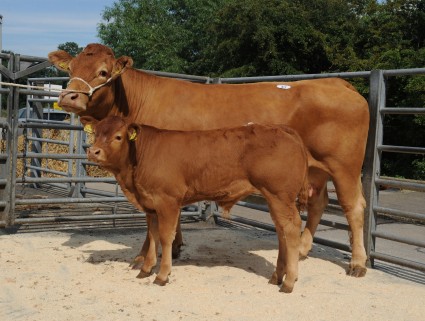 Leading the sale was the 12,000gns Miscombe Bolande.  July 2006 born this cow is by the AI sire Imperial and is out of the Broadmeadows Cannon daughter Bellisle Olande.  She was sold with her outstanding April 2012 born bull calf at foot, Miscombe Holande, by the bull Branceille whose progeny created a lot of interest on the day.  Purchasing the top lot was Danny Sawrij, Allerbeck Farm, Eaglesfield, Lockerbie for his fast establishing Swalesmoor herd.

The same purchaser also took the second top price animal in the shape of Miscombe Blackbird for 11,000gns.  This cow, May 2006 born, is by Truffaut and is out of the Jockey sired Miscombe Raven.  She was sold with another Branceille sired bull calf at foot, the April 2012 born Miscombe Hawk.  Mr. Sawrij had also featured prominently in buying some of the top lots at the recent Dinmore Herd production sale.

The Miscombe catalogue presented a herd built on high quality Limousin genetics with many of the brood families featuring bloodlines from the noted Broadmeadows, Rake, Woodhouse and Bellisle herds respectively.  This, combined with an infusion of new lines through the use of AI sires, provided a high quality offering for a packed ringside which again featured a mix of new breeders competing with established breeders and commercial producers.

Speaking after the sale, Newark Livestock Market auctioneer Paul Gentry said: “It was an outstanding sale throughout.  Different bloodlines were on offer and the cattle were real breeding types with a tremendous temperament and a good herd health status.  Proven in performance and production they showed power, growth, and milk, and were really well brought out by Farm Manager John Reynolds and Mary Reynolds”, he said.

British Limousin Cattle Society Chief Executive Iain Kerr also commented on the sale and the sustained demand for Limousin females that has seen three high level breeders’ sales in as many weeks gross just shy of £1.5 Million: “The trade is entirely market driven. Limousin cows have such flexibility, they can produce top level pedigree calves, first quality commercial calves and carcases, and are top grading cull cows.  Easy calving, can be run commercially, and are feed efficient.  It’s just the all round essential package of performance, production, and profititability that’s leading the industry.”

A major feature of the day was the 22 cattle purchased for a collective total of 133,000gns by another new and establishing breeder in the shape of Dai Walters, The Hollies,Rudry Road, Lisvane,Cardiff.

Leading the way amongst these purchases was the 9500gns paid for the six year old cow Miscombe Bubble.  By Ramses and out of the Uplands Batman daughter Miscombe Oasis, this cow was sold with her fourth calf at foot, the Loosebeare Bomber sired heifer calf Miscombe Hydro.

At 9000gns and selling to Mr Walters, was the classy four year old first calver Miscombe Dove who was sold Pd’d in calf to Uplands Batman.  Miscombe Dove is by Oxygene and is out of the Imperial sired Miscombe Albatross who herself went on to sell later for 6800gns.

Another at 9000gns to the same purchaser was Miscombe Becca from the Woodhouse Jessica brood family.  April 2006 born, Miscombe Becca is by President and is out of the Broadmeadows Cannon sired Miscombe Rebecca.  She was sold with her fourth calf at foot, the April 2012 born bull calf Miscombe Hamish.

Also at 9000gns was the Samy sired Miscombe Downlands.  Out of Miscombe Uplands and sold with her Brancielle sired heifer calf, Miscombe Heath, at foot, Miscombe Downlands was purchased by another new name in Mallaber Partners, Park Farm, Drakelow, Burton on Trent.

Late in the catalogue, the maiden heifer Miscombe Gamble made 9000gns when selling to the Frogmore pedigree herd of Chris White, Frogmore Farmhouse, Moreton in March, Gloucestershire.    This heifer, April 2011 born, is another by Oxygene and is out of the Samy sired Miscombe Chance.

Leading a strong bull trade was the 9000gns paid for Miscombe France.  April 2010 born, this Neuf son is out of Miscombe Britainia and combined breeding with a top beef value of LM+35.  The purchaser was CJ Dare & Son, who runs the Hugginhayes pedigree herd at Hugginhayes Farm, Upottery, Honiton,Devon.

Another purchase to Dai Walters was Miscombe Dunlin who sold for 8500gns.  A Parisien daughter this four year old is out of the Jockey sired Miscombe Starling.  She was sold with her Uplands Batman sired bull calf at foot, Miscombe Hobby.

Miscombe Falcon, a smart two year old heifer made 8200gns when selling to another new name in the form of H Waring, Park Farm, Everingham, York.  This heifer is by the herd’s noted stock bull Loosebeare Bomber, a Rainbow Simon son, and is another out of the aforementioned Miscombe Albatross (6800gns)