The Scottish Club started the year with new office bearers in place, with a new acting Chairman and a new Secretary appointed.

The events for the year started in February, with the Bull Sales at Stirling, and then in May we had two very successful Primestock Show and Sales at Caledonian Marts, Stirling, and Lawrie & Symington’s Lanark Market respectively. Thanks to everyone involved in organising these events.

The Club had a very busy and well-attended stand at the Highland Show where it was great to see so many members visiting. Unfortunately due to it being one of the coldest and wettest Shows for years, it was a case of popping in for a hot drink to heat up!

The Limousin Team again won the Interbreed title, which was made up of stock from two breeders over the border and a well-known Scottish Club Breeder, Mr & Mrs SD Illingworth of the Glenrock Herd who had two maiden heifers, Glenrock Fantastic and Glenrock Elusive, in the team. 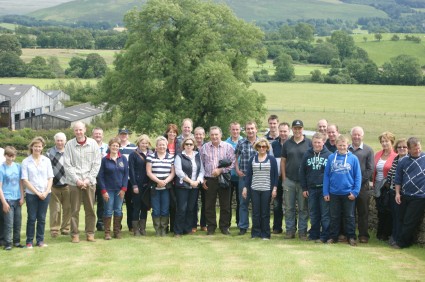 Later in the summer the Maraiscote herd also enjoyed a strong run at the Great Yorkshire Show, Harrogate where they won Male, Female and Overall Junior Limousin titles as well as winning the Individual Junior Interbreed title and featuring in the winning Junior Interbreed group.

Following on from the Highland Show, the Scottish Club held an Open Day and Stock judging on Sunday 15th July, by kind permission of the Thomson Family, Hilton of Beath Farm, Kelty. An enjoyable day was had by all viewing and judging the Beath Herd and also the cross-Limousin stock bred on the farm.

The Thomson Family put on an excellent display of cattle which were greatly admired by all on the farm tour and a tremendous show of stock for the stock judging. The Master Judge for the Stock judging was Natalie Cormack, who did an excellent job. The prize winners listed below, will definitely agree!

The day was completed by a lovely BBQ of steaks and burgers with refreshments and a special mention to Natalie for all the delicious homemade cup cakes.

The Club would like to thank all involved in making the day a success, also to the Young Farmers for scoring the stock judging and the sponsors.

On Thursday 19th July, the club began its trip to the North West region of England. It was an early start from Keith at 7:30am, collecting members at various points on the journey south, where we  enjoyed a fantastic visit to the North West Region. Herd visits included: Procters, Gunnerfleet, Whinfellpark and Netherhall. Members had an enjoyable stay at the Crooklands Hotel, Kendal.

In October, the Bull Sales were held at Stirling prior to which, on Sunday 21st October, the Club held its annual AGM and presentation dinner at Blairdrummond Hall. This was a very enjoyable evening for everyone, with the Herd Competition awards being present by the judge Mr Liam Muir from Orkney. Also, the Points Trophies were awarded by kind permission of UA Group.

On 17th November the Stars of the Future Scottish Pedigree Calf Show was held at Forfar Mart, with a new section for Young Handlers.

The Royal Highland Winter Fair, held at Ingliston on 28th November, introduced a new section to their schedule with classes for purebred Limousins.  Within the crossbred classes the Limousin breed dominated winning thirteen out of the fourteen sections available with Stuart Bett and Lynsey McKay winning the Supreme with their heifer Marvelous Mo.

Here’s to another successful year in 2013!