In front of noted judge Mr Paul Byas who runs the Middledale herd at Driffield, East Yorkshire, the August 2011 born Foxhillfarm Gracie took the Limousin Championship honours from a small but quality breed entry of seventeen animals.  In such a prestigious anniversary year the Individual Interbreed title was the one to win and, moving into the afternoon, Foxhillfarm Gracie duly got the nod as both the Individual Interbreed & Exhibitor Bred Champion from the Interbreed judge Mr D Bull, Lambourn, Berkshire.

Full of style, and with tremendous width, Foxhillfarm Grace is by the prolific 42,000gns Wilodge Vantastic and is out of the 15,000gns foundation female Bankdale Alice who was purchased at the Bankdale Dispersal Sale at Carlisle whilst in-calf with Gracie. In late 2012, Gracie had won the inaugural pedigree Limousin Championships held within the Scottish Winter Fair event at Ingliston.  The win at the Royal Bath & West came in the Alfords second year of showing pedigrees at this noted event.  From a basis of five cows, and following some embryo work, the Foxhillfarm pedigree herd now carries some 25 head in all.

On the Thursday, Foxhillfarm Gracie teamed up with the Overall Reserve Limousin, and Male Champion, Culnagechan Giantscauseway from Nick Hill, Decoy Pool Farm, Nyland, Cheddar, Somerset, to take the Reserve Championship in the Burke Trophy.  The famous Burke Trophy, judged on this occasion by Mr Danny Wyllie, Tamworth, Staffordshire, was situated at the Royal Bath & West to mark the show’s 150th anniversary.  Next year this prestigious award moves on to the Three Counties Show Malvern which has now secured ‘Royal’ status.

Culnagechan Giantscauseway was purchased from breeder Mr Derek Hume, 44 Maghereagh Road, Randalstown, Co Antrim at Carlisle in February for 7000gns.  Sired by the Wilodge Vantastic sired Carmorn Copilot, this April 2011 born bull is out of the Tanat Mostyn sired Ballydonaghy Skylark.  Local breeders the Hill family of Nick, Lisa, Archie & Lottie have been strong supporters of the show and prolific winners along the way.  In 2012 they took the Reserve Interbreed title with the January 2009 born Quaish Evie who is another Vantastic daughter.  Evie was back again in 2013 picking up a first in the cow or heifer class and placing Overall Female Reserve Champion. 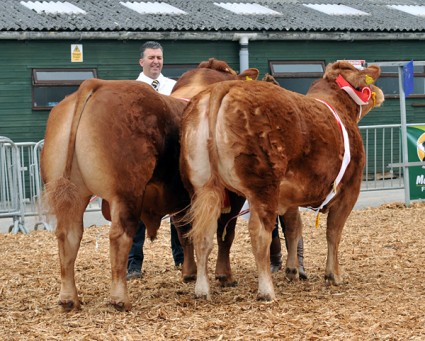