Having won the Heifer Championship, Daddy’s Big Bucks went on to be crowned Overall Commercial Champion on behalf of Mr & Mrs MJ Alford, Foxhill Farm, Blackborough, Cullompton, Devon. July 2012-born, this Limousin-cross heifer is sired by the Saphir son Emslies Diehard and is out of a Limousin cross dam. Weighing in at 507kg, she was purchased for 5,400gns from Gary Raeburn at this year’s Thainstone Spectacular, this being her first show outing. Commenting, Judge Mr Charlie Anderson, Nether Stenries, Carrutherstown, Dumfries said: “My Overall Champion is a very sweet heifer, with plenty of style and good locomotion, is well fleshed and just coming into her prime.” The Alfords had stood Reserve Overall at last year’s event with No Likey No Lighty so went one better here.

Taking the Steer Championship was the homebred Limousin-cross Django from Mr JL Marks, Gillyflatts Farm, Bishopton, Stockton. September 2012-born and weighing in at 594kg, he is sired by Fieldson Alfy and is out of a Limousin-cross dam. In October, he had stood Steer Champion at Countryside Live. Reserve Steer Champion was consigned by Tecwyn Jones, Ty Newydd, Nebo, Llanwrst with the 643kg Limousin-cross John Smith. This May 2012-born steer is by Shire Apollo who also sired Mr Jones’ Champion here in 2012 – Black Beauty. Bred by John Smith-Jackson, he was purchased for 3,600gns at Carlisle’s Spring Sale which Mr Jones judged and placed him as his Champion.

In the Baby Beef classes judged by Hugh Dunlop, Holehouse Farm, Ochiltree, Cumnock, Ayrshire, standing reserve was Alister & Elizabeth Vance’s 285kg Limousin-cross Bonnie Betty from their Bridgehouse Farm, Whithorn holding. A May born daughter of Wilodge Azure, she had previously won first prizes at Colmonell Show and Wigtown Show during the summer. She next heads to the Scottish Winter Fair and Smithfield. 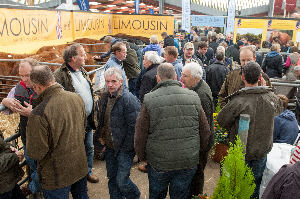 A busy Limousin stand welcomed breeders and customers with some excellent hospitality provided by the North West Limousin Club. The top-quality commercial and pedigree Limousin cattle on display underlined the Limousin’s ability to provide market-relevant cattle regardless of type or farming system. 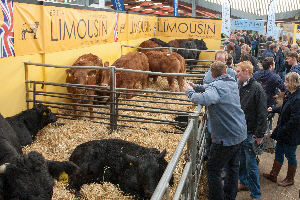