One of the first Limousin herds in Scotland, the Normande Herd was established approaching some 40 years ago.  Over the years the herd has met with many successes in both the sale and show ring with one of the highlights being winning the Queen’s Cup at the 1994 Royal Highland Show with the bull Filip and in partnership with the late Doug Edgar.  At the herd’s Dispersal Sale, 58 lots sold in all to gross a solid £112,000.

The homebred bull Normande Jack made 3200gns when selling to AF Thomson, Lammerview, North Berwick, East Lothian.  Another February 2014 born bull, Normande Jack is by the Irish sire Brookfield Elmo and is out of the eleven year old Normande Vanessa.  The Brookfield Elmo daughter Normande Herys was sold with her bull calf at foot for 3000gns.  Herys is December 2012 born and is out of Normande Erys.  Her April born bull calf, Normande Lewis, is by the Highlander son Beck Giant.  This outfit was purchased by an undisclosed buyer.

At 2900gns was another of the herd’s stock bulls Cillicon Greenson.  Another from Ireland this 2011 born bull was bred by John Moloney, Ardnacrusha, Co Clare.  Sired by Ideal he is out of the French cow Raquette.  Purchasing this lot was D Millar, Dungivan, Co Londonderry. 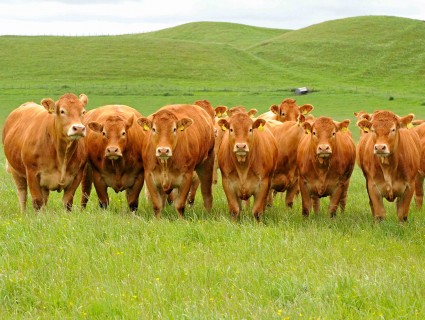 Two animals made 2800gns.  The first of these was the Moloskey Claus sired Normande Goya.  Out of Normande Copelia, this first calver was sold with her Roundhill Hamlet sired bull calf at foot, Normande Lord.  This was another outfit knocked down to an undisclosed buyer.

Back in the bulls and the stock bull Beck Giant made 2800gns when selling to SC Barron, Maunby House, Thirsk, North Yorkshire.  This April 2011born bull was bred by WJ Hickson, Knarrside Farm, Colne, Lancashire.  Noted as a ‘very easy calving sire’, Beck Giant is by Highlander and is out of the Ronick Haw sired Beck Doreen.

The November 2012 born Normande Hojo made 2700gns.  Sired by Moloskey Claus and out of Knockhill Pojo this female was sold with her first calf at foot, the May 2015 born bull calf Normande Ludo, a Beck Giant son.  This lot was also knocked down to an undisclosed buyer.