The annual Young Limousin Breeders Anglo-Irish stockjudging competition was held on Saturday 21st November within the English Winter Fair event, at Stafford County showground.  Established jointly in 2007 by the British and Irish Limousin Cattle Societies respectively, the aim of the Anglo Irish event has been to promote young breeders all-round stockjudging skills in a spirit of competition and friendship between the two herd books.

This year’s event, the ninth staging in all, organised by the British Young Limousin Breeders Club with support from the parent British Limousin Cattle Society and the English Winter Fair, saw the event include teams from England, Ireland, Scotland & Wales. 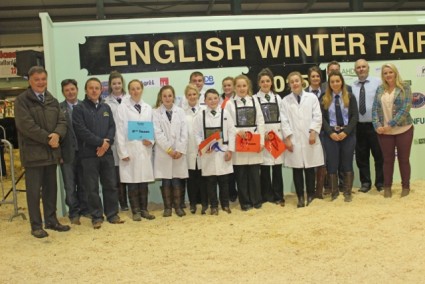 After some fantastic competition, held at a very high level of ability, it was the Irish team who emerged victorious winning the competition for the second year running.  The 2015 winning team comprised of April Higgins, Rachel Maloney, Aidan Kinahan and Owen Hester. In the runners- up position was England with their team of Jessica Simms, Harriet Wilson, Gemma Slater, and Matt Wright. Scotland slotted in at third with Stephanie Dick, Amy and Jane Lindsay and Christina Smith.

In line with previous years, the Anglo-Irish competition is divided into three sections which are judging, followed by reasons, and lastly handling and showing ability.  Each section is given equal weighting.  All of the teams, comprising of four competitors in each, judged a class of four heifers and four steers, before giving their reasons to a panel of judges made up of Phillip Kermode, Duncan Hazard, Michael Gunn and Iain Kerr. 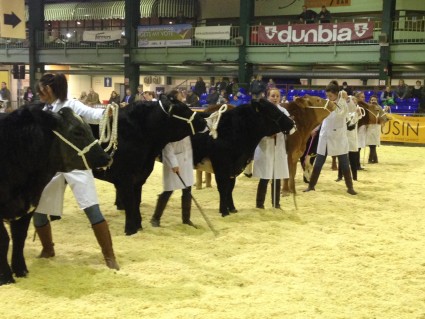 The Placing and Reasons Sections challenged the competitors to correctly judge and place in order the four heifers and then to outline to the judges’ panel their reasons for doing so. This was felt by many to be the toughest element of the competition with content; appearance and manner of presentation; accuracy of observation; focus on comparison rather than descriptive statement; and style, ability and confidence; all being taken into account.  All of the judges commented on the high standard of reasons given with the competitors being confident and composed, and very accurate and articulate. 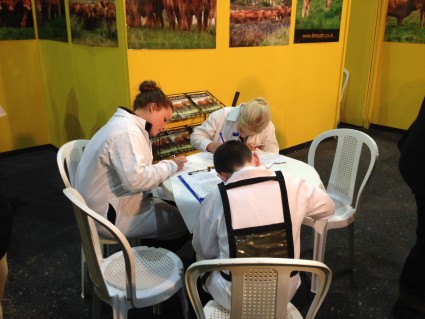 In the Handling section, competitors displayed their skills in cattle handling, including parading an animal and standing it up for the judges’ inspection. The Young Limousin Breeders only had a limited time to become acquainted with the animals that had been put forward. Elements taken into account in this section were ability, style, conduct and appearance.  Again the judges were very impressed with the standard of presentation, knowledge and ability the Young Breeders showed throughout the whole competition. Phillip Kermode commented “We had a very difficult but enjoyable task. The standard was very impressive throughout the competition, and all of the Young Breeders were a credit to themselves and to the Limousin breed.”

At the close of the day the British YLBC Chairman Kirree Kermode said: “On behalf of the Young Breeders Club I would like to thank all of the judges on the day, the exhibitors for providing an excellent display of stock to judge, and the English Winter Fair committee and stewards for all of their hard work in helping to organise cattle and the main ring.  Finally the kind generosity of the sponsors Show Winners, Trisant Design, Orrisdale Cottages, InfinET breeding Ltd and the British Limousin Cattle Society was greatly appreciated.  It was an extremely enjoyable day with some fantastic and friendly competition.

Next up for the Young Limousin Breeders Club is the 2015 Young Limousin Handlers Championship due to be held on Thursday 10th December at Borderway Mart, Carlisle.  Entry forms can be found at: https://limousin.co.uk/the-society/young-breeders/ylbc-forthcoming-events/