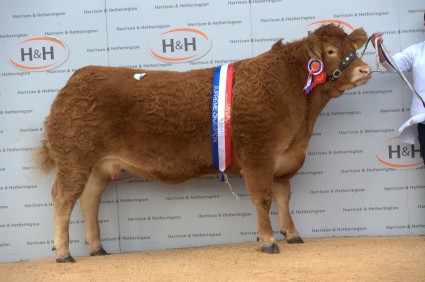 An embryo calf Brockhurst Howzat is by Wilodge Vantastic and is out of Brockhurst Bolshoi the 2014 Royal Highland Breed Champion.  Bolshoi herself is by Grahams Samson and out of Ronick McAinsi.  Described as one of the best females bred in the Brockhurst herd, this first calver was sold Pd’d in calf to Ardglasson Highlander.  Purchasing the Champion animal was Aileen Ritchie, Tamala, Burnside, Whitecairns, Aberdeenshire for her Ritchies pedigree herd.   Earlier in the day in the pre-sale show Brockhurst Howzat had come through a strong line-up of first prize winners to be given the Championship nod by the judge Lynwen Emslie who along with her husband Harry runs the noted Emslies herd at Kinockie, Mintlaw, Peterhead, Aberdeenshire.  Commenting on her Champion Lynwen said: “This heifer is powerful, very correct, very sweet, and has tremendous breed character.  She showed herself extremely well.”

The Reserve Champion and winner of class two was the November 2013 born Goldies Inchantress from Bruce Goldie, Townfoot, Mouswald, Dumfries.  Another powerful heifer with tremendous length Inchantress is by Kaprico Germander, a Sympa son, and is out of Goldies Etoile a daughter of the prolific female Goldies Vitality.  Along with this heifer, who was sold as empty, Bruce Goldie offered one grade A frozen embryo sired by Ampertaine Gigolo (the sire of the world record breaking Trueman Jagger.  The Reserve Champion was also purchased by Aileen Ritchie.

In the Weaned Calf the new record mark of 10,000gns paid for Oddacres Lemmy was also the highest sale to date achieved by the breeder Andrew Mason.  This calf, perhaps the most extreme bull calf bred in the herd, is the first to be offered at a Society sale by the sire Gallois a French bred bull who was imported at eight months old.  The sire’s back pedigree features both the noted bulls Jacot and Sauvignon.  After some spirited bidding Oddacres Lemmy was purchased by James Cooper for his Tomschoice pedigree herd at Hill Top Farm, Dacre, Harrogate, North Yorkshire.

1st in class 1 and Overall Champion