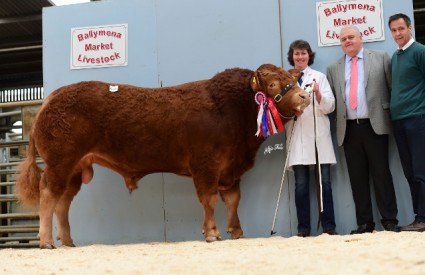 Realising the top price of 4,200gns on the day was Ballyrobin Jamesons bred by Miss J Gilliland, The Grove, Ballyrobin Road, Antrim. This November 2014 born bull is sired by Frewstown Breakdance and is out of the home bred dam Ballyrobin Estee, a Wilodge Vantastic daughter.  He caught the eye of judge and local breeder Neil Martin, owner of the Ashmara pedigree herd from Dromara, and was crowned Overall Supreme Champion, Male Champion and Intermediate Champion.  With a beef value of LM+33 he now heads to Simon Moore, Aldergrove for his large commercial unit.  This was the second BLCS sale in a row that Joan Gilliland has topped and following the 20,000gns received for Ballyrobin Joop at Carlisle in February this year.

Gaining the second top price of 3200gns was the class winner Sharnagh Jet bred J Henry, Hollybank Farm, Lenagh Road, Antrim. This October 2014 born bull is sired by Iveagh Gilkes, who was purchased at Carlisle for 20,000gns, and is out of the homebred dam Sharnagh Eve, an Ampertaine Abracadabra daughter.  This bull has a beef value of LM+38 and was purchased by Neil Donaghy, Cross.

Next was Pointhouse Jumpingjack bred by M Diamond, Carhill Road, Garvagh selling for 3100gns.  This December 2014 born bull is sired by Ampertaine Gigolo and out of the home bred dam Pointhouse Bluebell, a Millbrook Tanko daughter.  With a Beef Value of LM+39 he now heads to new owner W Simpson, Killyleagh.

Following at 3,000gns was Overall Supreme Reserve, Reserve Male and Reserve Intermediate Champion Slieve Jaffa bred by Messrs J & S McGeehan, Fivemiletown.  This November 2014 bull is by the AI sire Wilodge Cerberus and out of homebred dam Slieve Holly a Nectar daughter.  With a Beef Value of LIM+47 he was purchased by W Armstrong, Tempo.

Fetching the top price of 2,900gns in the females was Rahoney Janet bred by H & D McFarland, Rahoney, Trillick.   This March 2014 female was crowned Reserve Female Champion in the pre-sale show.  Rahoney Janet is sired by Ampertaine Elgin and is out of a home bred dam Rahoney Gracious. Gracious is a Wilodge Cerberus daughter and full sister to Rahoney Geoffrey who sold in Carlisle for 23,000gns.  She now heads to new owner Brian Quinn, Dungannon.

Fetching second top price for the females at 2,150gns was Togherdoo Linda bred by V Keys, Galbally.  This May 2015 born heifer stood as Overall Female Champion.  Sired by Haltcliffe Dancer she is out of the home bred dam Togherdoo Emma a Rocky daughter with Broadmeadows Cannon bloodlines. Purchasing the Female Champion was Limousin breeder Ms Danielle Black, Macosqin, Coleraine for her Leckview Herd.