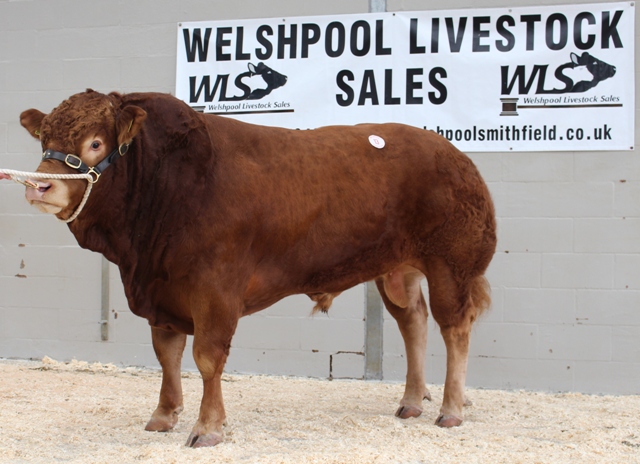 Topping the sale at the North West Midlands & North Wales Limousin Regional Club spring show and sale held at Welshpool on Thursday 19th May was Wilodge Jetsetter selling for 6500gns.

Shown by Wilodge, Lodge Hill Farm, Park Lane, Shifnal, Shropshire, this is the first son of the herd’s stock sire, Gerrygullinane Glen, to be offered for sale and was out of Wilodge Easternpromise a Vantastic daughter. Jetsetter was purchased over the phone by Messrs Quick for their Loosebeare herd based in Devon.

Following at 6200gns was another entry from the Wilodge team another Glen sired son, Wilodge Jagameister. He was out of one of the herd’s top brood cow, Wilodge Vavanelle, who is the great Ravenelle’s eldest daughter and is full sister to the renowned Wilodge Vantastic. Jagameister was sold to MJ Grey of Llandrindod Wells.

Reaching  5500gns was Twemlows Jockey offered by Will and Jackie Forrester.  This 18 month old son of Twemlows Hank is bred from a Scorboro Universe sired mother.  He was purchased by GP Pugh & Son of Rhayader.

The days Overall Champion followed next selling for 5000gns.  Haulfryn Jonny is sired by the imported bull Arthur and his mother is a Fieldson Alfy daughter.  Consigned by Haulfryn Farming, Jonny was secured by the judge RG Francis & Son, Newtown, Powys.

The youngest entry to the sale sold at 4800gns for Garyvaughan Larry offered by CV & EM Lewis.  Larry also won the Reserve Supreme Champion ticket at the pre-sale judging and is a son of the herd’s senior stock sire Plumtree Deus and out of a Nouvelle Prospect bred mother.  He sold to M & H Owens of Llandysul, Ceredigion.

Heading up the females on offer was a pair of heifers from the Calogale draft sale of GJ Lee & CM Lloyd both selling for 3500gns each.  The first to sell was Calogale Jess, an in-calf heifer sired by Plumtree Deus and out of the noted Baileys Countess dam.  Jess sold with the chance of being in calf to the world record breaking sire Trueman Jagger.  She goes to H Jones of Llanerchymedd, Anglesey.

Following was a stylish maiden heifer, Calogale Jemma by Rainbow Simon and the first daughter from the herd to be sold out of Trueman Florence a great Wilodge Vantastic daughter.  She was knocked down to RJA Jones of Tregannon, Ceredigion.