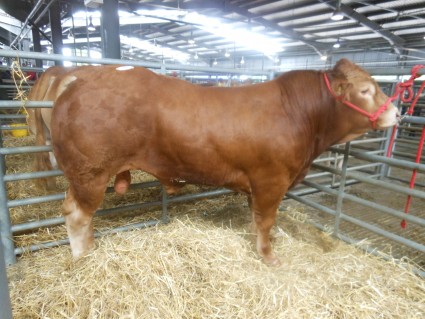 Kivells held their Annual Summer Sale of Pedigree Limousins at Exeter Livestock Centre, Devon on Friday 24th June and a packed ringside witnessed a very solid trade. Top of the day was the 2900gns (£3045) paid for the 18-month-old bull Killerton Jackfrost by Crossdykes Goliath from local breeder Patrick Greed.  Mr Greed also sold another bull by Chytodden Conan at 2650gns (£2782). Other bulls sold to 2700gns (£2835) for Josh Leo by Loosbeare Docker from Messrs MA & D Luxton of Bude.

The female section topped at 2400gns (£2520) twice.  First up was Smithy Liberty a 13-month-old heifer by Ampertaine Gigolo out of the French & Dutch National champion cow “Breizizel” from Tony, Jo & Adam Smith of Bude.  Also at the 2400gns mark was Moonleaze Lovestruck a 15-month-old heifer by Loosebeare Golddust from Mr & Mrs JJ & BD Comer of Wiltshire. Other heifers sold to £2300gns (£2415) for Timberlands Jacaranda by Cloughhead Umpire who sold due in December from Mr C Phillips of Taunton. A smart consignment of heifers from John & Russell Stevens of Crediton sold to a top of 1850gns for Holwellbarton Joyce with others to 1700gns (£1785). Purebred heifers sold to 980gns (£1029) for Tony, Jo & Adam Smith.  A good entry of smart cows and calves from Messrs MM Gollop & Sons of Cullompton sold to strong demand and topped at 2200gns (£2310) for Sloughpool Henrietta a second calver by Normande Denham and who sold with her April born bull calf by Haltcliffe Cyclone. Others from the same vendor sold at 1800gns twice for similar outfits.