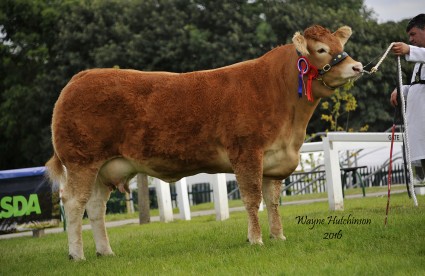 The September 2012-born Heavenly is rearing her second calf within Doug’s 80-strong Limousin herd, which was established in 1988 with purchases from Tanhill and Upland sales. This was the cow’s first major show win; however her dam, Brockhurst Bolshoi, is a previous Interbreed Champion at the Great Yorkshire.

Reserve position was taken by Dougie McBeath and Sarah Jessop’s Poolehall Iris, by Haltcliffe Ben. Born in October 2013, and purchased for 4,800gns at the Red Ladies Derby at Borderway Mart, Carlisle in 2014, this heifer had placed Reserve Supreme at the 2016 Royal Highland Show.

Judging the Limousin classes was Dafydd Griffiths, from the noted Mynach herd, Whitland in Wales.