Appropriately named, and ‘Highlight’ of the day, a full ringside fell silent as H&H auctioneer James Little took an opening bid of 10,000gns to set the ball rolling. After a flurry of bids she was knocked down to new Limousin breeders Mick Gould and his wife, trading as M & J C Gould, Grange Farm, Bomere Heath, Shrewsbury, along with his brother-in-law, Jonathan and his nephew Tom Waring.  The Goulds are in the process of establishing the Woodmarsh herd prefix, whilst Jonathan and Tom already have the Everpark herd prefix. Commenting Mr Gould, who also runs 300 dairy cows and a pedigree Texel flock, said: “In establishing a new herd we wanted to start with something exceptional and in my mind a cow like this very rarely comes on the market.  She’s a superb cow visually and just full of breeding and quality.”

The leading price of 50,000gns and a new cow and calf breed record was paid for the four year-old-cow Millington Highlight who was sold with her heifer calf at foot, Millington Limelight.  The full package, Millington Highlight combined visual appearance along with a depth of breeding and excellent performance figures.  For good measure she also arrived with a lengthy show record that included two Reserve Supreme Championships at the Great Yorkshire Show.   An embryo calf she is a Wilodge Vantastic daughter out of Brockhurst Option whose mother is the highly regarded Ronick McAinsi.

Confirming the demand for the bloodline and the quality on offer the second top price of 30,000gns was paid for Millington Highlight’s first calf, Millington Juliet.  This November 2014 born calf is by the French sire Ecran and again she sported some outstanding performance figures.  Purchasing this maiden heifer was John and Pat Varley for their Queenshead herd based at Myrtle Grove Farm, Queensbury, Bradford. Commenting Pat Varley said: “We have been a closed herd for a little while now and felt this was the chance to buy a heifer that has it all. She’s got the looks and the figures to match!”

In all six animals made 9,000gns or more at the sale; proving the strength and depth of cattle in the catalogue that was described as ‘a rare opportunity to acquire some of the best Limousin genetics in the UK’. The sale of the Millington herd, owned for the past two years by Ashcourt Farms Ltd, followed a company restructure and change in farming policy. The herd has been managed for the past six years by Ian Nattress. Ian had turned the cattle out superbly on sale day which was a testament to his attention to detail and the Society is sure on behalf of everyone who knows Ian that we all wish him the  best in the future.  Commenting after the sale Ian Nattress said: “I feel very proud to have been able to manage and run the Millington herd for the last six years and I’d like to thank both John Weatherill and Bob Bousfield for the opportunity. The herd itself was very much going in the right direction and well on the way towards where I wanted them to be. I would like to wish all the purchasers the very best of luck. Millington Highlight and her daughter Millington Juliet are probably the best two cattle I have ever had the pleasure in working with to date.”

The Millington herd was originally established by John Weatherill some sixteen years ago and Mr Weatherill, who is looking to re-establish a Limousin herd, featured among the purchases during the day.

Leading Mr Weatherill’s purchases was the 12,000gns that he paid for the served heifer Millington Joyous.  Joyous is a Greenwell Fieldmaster daughter and out of the Highlander sired Millington Gracious.  Another to go to the same buyer was the 10,000gns Millington Hilton who was sold with her first calf at foot, the bull calf Millington Mayfair by Norman Hawk.  December 2012 born, Hilton is an embryo calf by Objat and is another out of the same dam as the top price, Brockhurst Option.

At 11,800gns was another embryo heifer calf Millington Lapwing who was the same breeding, sired by Objat and out of Brockhurst Option.  She was purchased jointly by the Calogale herd of Messrs Lee, Kidwelly, Carmarthenshire, along with the Frogmore herd of Chris White, Moreton-in-Marsh, Gloucestershire.

Early in the sale Millington Gorgeous made 9,200gns.  This 2011 born embryo calf is a Mas Du Clo daughter out of Brockhurst Option and was sold with her bull calf Millington Majestic at foot, a Norman Hawk son.  This outfit was purchased by Bruce Goldie, Townfoot, Mouswald, Dumfries for his Goldies pedigree herd.

A female sale from the Westpit herd – Sale Preview 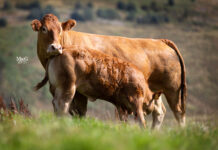