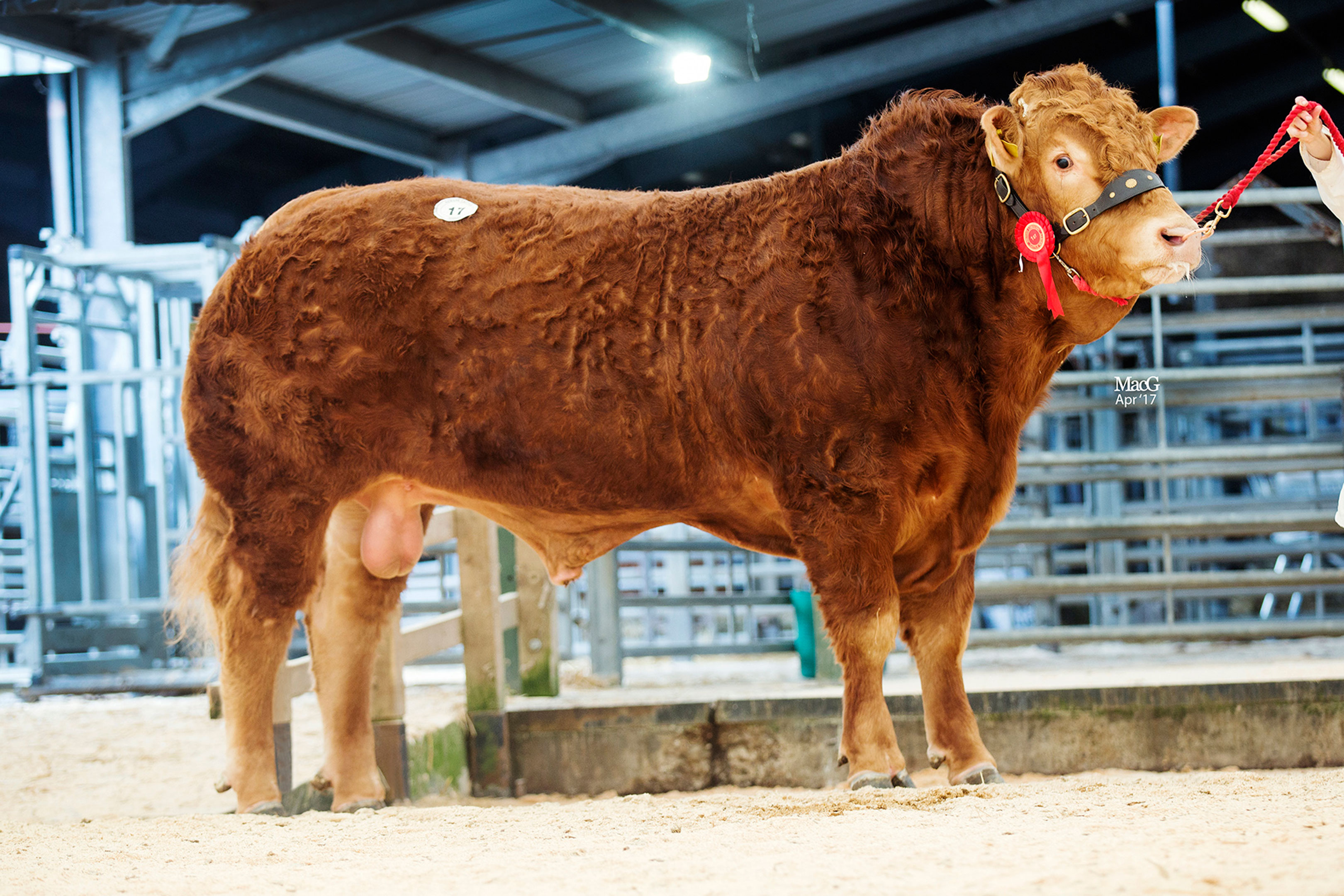 Pedigree and commercial buyers were active at the Newark Limousin Day Sale held on Saturday 1st April at Newark Livestock Market.  The bull trade peaked at 6000gns, while females sold to a top of 4500gns under the gavel of auctioneer Paul Gentry.

Mr Gentry said the sale had seen another exceptional day’s trading with solid demand from start to finish and once again buyers from across the country eagerly bidding on the cattle forward.

“The ringside was packed from start to finish and a number of buyers left without having been able to buy the cattle they came for. A clearance rate of 96% across the sale demonstrates the keenness of buyers and vendors are to be commended for putting forward a highly saleable offering of cattle.

Leading the Newark Limousin Day Sale was the May 2015 born Calogale Lionheart from Messrs Lee and Lloyd, Kidwelly, Carmarthenshire. This embryo calf is a son of the noted Ampertaine Gigolo and is out of the Wilodge Vantastic daughter Goldies Glorious.  Sporting excellent performance figures this bull, which placed first in class four in the pre-sale show, was sold with a beef value of +41 and growth and muscle depth figures in the top 1% of the breed. Described as a “strong and tremendously well balanced bull, long and clean, with plenty of width”, Calogale Lionheart was bought by J T Mitchell and Sons, Thursford, Fakenham, Norfolk.

Second best of the day was a 5800gns call for the August 2015 born Loosebeare Lumpy from Messrs EW Quick & Son, Loosebeare Manor, Zeal Monachorum, Crediton, Devon. This son of homebred sire Loosebeare Fantastic is out of Loosebeare Governess, a Haltcliffe Anzac daughter. Buying this one were J and J R Appleby, South Somercotes, Louth, Lincolnshire. Loosebeare Lumpy had earlier stood second in his class to the Reserve Male Champion.

The first bull of the day, Sportsmans Ferguson from Ian Brown, Lowgate Farm, Spalding, Lincs sold for 5000gns. This Wilodge Vantastic son, bred by Boden & Davies, Stockport, is out of Glenrock Ursula, a Marquis daughter and was sold as a result of coming back on his daughters. Purchasing this bulls was H Kelsey and Son, South View Farm, Belcroft, Doncaster.

Then making 4500gns was Gascoines Lawrence from the Gascoines Group, Southwell, Notts. This son of Fieldson Beefy, a Fieldson Ultimatum son, is out of Bailea Feebee, a Veteran daughter and was the pick of Fristling Farms, Essex.  Earlier in the day the April 2015 born Gascoines Lawrence had been placed as the Male and Overall Champion in the pre-sale show judged by Vicki Smith who runs the Columbpark herd at Little Orchard Farm, Lammas Close, Thelbridge, Crediton.  Commenting on her Champion Vicki Smith said: “This was a long, clean bull with good hindquarters.  He had length, was well balanced and correct, and good in his locomotion.  A bull with presence he had a lovely head which caught my eye straight away”.

Also at 4500gns was another from the Quick family in the shape of Loosebeare Login.  Also sired by Loosebeare Fantastic this one is out of the rising ten-year-old Loosebeare Canna. Login was knocked down to C E Hardcastle, Little Porton, Grantham.

Three bulls then sold at 4000gns.  The first of these was Bonshaw Black Leopard from Moonlight Hollow Ltd, St. Mary’s Hall Farm, Colchester. This March 2015 born bull is by Goldies Gymnastics and is out of Bailea Heythere, a Dragueur daughter.  Purchasing this bull was A Smith and Son, Selston, Nottinghamshire.

Second at this money was Clifftown Lynx from D S Townend, Quarry Farm, Malton, North Yorkshire. He is a son of Acajou out of Millstone Fragrance, a Wilodge Vantastic daughter. Already used at home, and a bull which had placed Junior Champion at Ryedale Show, he sold to H and S Nesfield, Cranbrook, Kent.

The final 4000gns call was made for Ewdenvale Luke, a Vagabond son from Steven Wilde, Bradfield, Sheffield. This one is out of an Ionesco daughter, Ewdenvale, Candy, and sold with a beef value of +36. He was taken by R Dunthorne, Limpenhoe, Norwich.

Selling at 3800gns was another from the Quick family, Loosebeare Lucas. This son of Norman Gus is out of Loosebeare Danabell, a Raysonhall Utah daughter and was the choice of F and S M Stamper, Bromeswold, Huntingdon.

A further three also sold at 3800gns, with the next being Messrs Heald’s Coachhouse Lyle, a Mereside Daytona son out of Coachhouse Georgina, a Coachhouse Amos daughter. Taking this one were A Peacock and Sons, East Drayton, Retford. Coachhouse Lyle had placed Reserve Male Champion in the pre-sale show. Also at this level was Threaphurst Lotus from J M and M J Bennett. Sired by Netherhall Gallant he is out of Threaphurst Gabby, a Wilodge Tonka daughter, and sold to G J and J H Byard, Pisley, Chesterfield.  The final 3800gns call among the bulls came for Fieldson Lordship from the Fieldson family. This son of the noted Ronick Hawk is out of Fieldson Galaxy, a Rocky daughter and sold with a beef value of +42, being bought by S Higgott and Son, Nailstone, Nuneaton.

Trade was equally as keen in the females on offer, with a top call of 4500gns made for the stylish Absolute Melody, the Reserve Female Champion, from Richard Bartle and Mary Cormack, Upper Dinmore, Herefordshire. Sired by Diamant and out of the Wilodge Tonka daughter Wilodge Venelle, a full sister to Wilodge Vantastic, she sold to the Gould family, Bromere Heath, Shrewsbury.

A 4400gns bid followed that, with this paid for Mereside Herena from Messrs RM Hazard & Sons, Saltby Heath Farm, Grantham, Lincs.  Sired by Dormeur this second calver is out of the Vagabond daughter Mereside Ferena and sold with a bull calf at foot by a non-pedigree Limousin sire and in-calf again to a Blue sire. Buying her were D J Summers and Son, Somerby, Gainsborough.

Then making 4300gns was another of the Hazard family’s offering, this time the Objat daughter, Mereside Demitria. She is out of Mereside Amber, a Mereside Tobius daughter and sold with her sixth calf at foot, a heifer calf by Haltcliffe Dancer. This one went home with P M and L Harris and Son, Ashbourne, Derbyshire.

Next best at 4000gns was Wilodge Bravenelle from Richard Bartle and Mary Cormack. This Wilodge Tonka daughter is out of Ravenelle, making her a full sister to Wilodge Vantastic, and sold with her fifth calf at foot, Absolute Myrtille, a daughter of the world record priced Trueman Jagger. She was knocked down to W Tomlinson, Treswell, Retford.

Taking a 3600gns call was another of the Hazard consignment, Mereside Dream, a Tehix daughter out of Mereside Uda, a Dyfri Orator daughter. Sold with her fifth calf at foot and back in calf to a Blue bull she was bought by T Gratton, Riber, Matlock.

Then selling at 3500gns was Frogmore Lydia from Chris White, Moreton-in-Marsh, Gloucs. This Wilodge Cerberus is out of Ironstone Frangelica, a Clown daughter, making her full sister to Frogmore Helen, the interbreed champion at the Royal Welsh Show in 2015. She was taken by R M Hardy, Cauldon Low, Stoke-on-Trent.

Paul Dawes, Dinmore Manor, Herefordshire, then sold the imported heifer Lesly at 3200gns. This French bred heifer is by the polled sire Hinz and out of Ginette, a Delice daughter and was bought by N Darling, Intwood Farm, Norwich. In the pre-sale show the October 2015 born Lesly had stood as Female Champion and Overall Reserve.

The Pitcher family, Ivy House Farm, Boston, Lincs, then sold Cockleshell Jazzy at 3000gns.  This Anside Flint daughter is out of Cockleshell Candy, a Winnington Trumps daughter. Selling with a beef value of +44 and her first calf, Cockleshell Mack, at foot, she is back in calf to Dinmore Goldcrest and was bought by Paul Gentry, Brant Broughton, Lincoln.