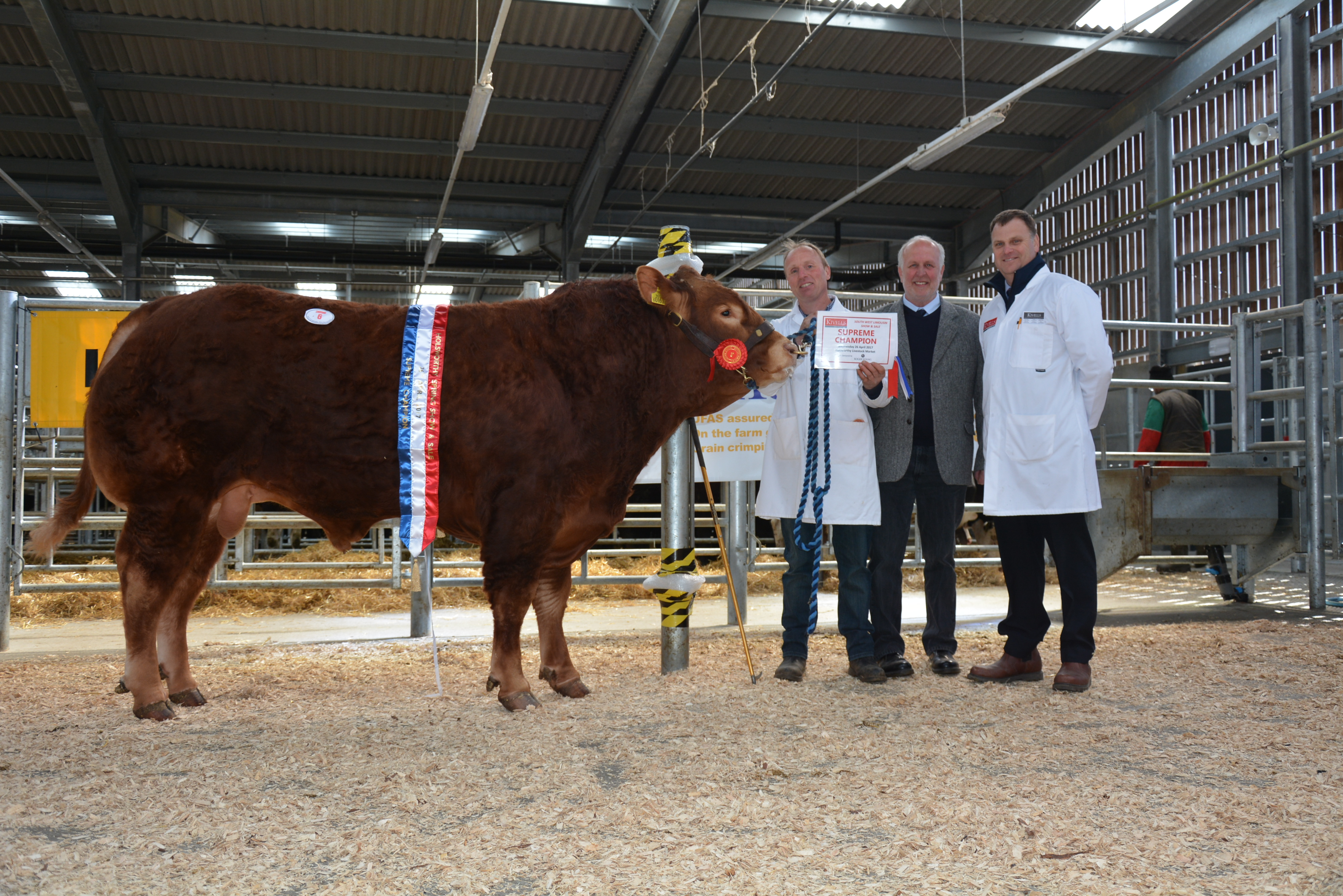 Limousin bulls met with a record trade for the fixture at the South West Limousin Spring Show and Sale held at Holsworthy Livestock Market on Wednesday 26th April 2017.   In all, twelve out of the fourteen bulls forward sold to average a very healthy £3308.  The day’s top price of 4800gns was a record for this fixture and seven bulls made 3000gns and more.

Commenting, the auctioneer Mark Brommell, Kivells, Holsworthy Livestock Market said:  “It was a flying trade for well grown and well fleshed bulls.  With the competition around the ring we could have easily sold double the numbers here today!”

Leading the way with the record top price of 4800gns was Loosebeare Liberal from Messrs EW Quick & Son, Loosebeare Manor, Zeal Monachorum, Crediton, Devon.  This June 2015 born bull is by the herd’s stock sire Aghadolgan Emperor and is out of Loosebeare Evilla, a Rainbow Simon daughter.  Paying the top price was A Rowe, East Totleigh, Sheepwash, Beaworthy.

Loosebeare Liberal had earlier in the day been placed as the Supreme Champion of the pre-sale show by the judge Chris Richens formerly of the Broadoak Herd.  Speaking at the close of the sale Mr Richens said:  “There was a very good entry of strong senior bulls at Holsworthy.  The Champion was a lovely well managed bull with a very good back end.”

From AK & JK Smith, 4 South Park, Jacobstow, Bude, the May 2015 Smithy Leo sold for 3500gns.  Smithy Leo is an embryo calf by the noted sire Sympa and is out of Breizizel a cow that has previously stood as both the French and Dutch National Champion.  Smithy Leo was another bull purchased by GA Richards, Trendeal Farm, Summercourt, Newquay.

Two bulls from JH Neale & Son, Wilkie Down, Boyton, Launceston, Cornwall made 3300gns and 3200gns respectively.  The first of these, and the first bull in the ring, was Nealford Luton at 3300gns.  Sired by Glenrock Fortune and out of the homebred Nealford Gamebird, this February 2015 born bull was purchased by AJ Eggins, Lower Uppaton Farm, Roborough, Plymouth.

Selling at 3200gns was the October born Nealford Landboy.  Got by the AI sire Ampertaine Foreman, and out of Nealford Candy, Nealford Landboy was snapped up by MJ Wooldridge, Oaklands Farm, Okehampton.

The leading price from a small show of cows and calves was the 2400gns paid for Ardlea Cucu from H&JL Parker, Home Farm, Stourton, Warminster, Wiltshire.  Originally bred in Ireland by Dan Tynan, Beechhill Farm, Co Laois, this cow is by Bremore Volvo.  She was sold with her September 2016 born bull calf at foot, Stourhead Milo, which is sired by Haltcliffe Firefly.  Purchasing this unit was GS Brown, Kerswell Farm, North Molton, Devon.