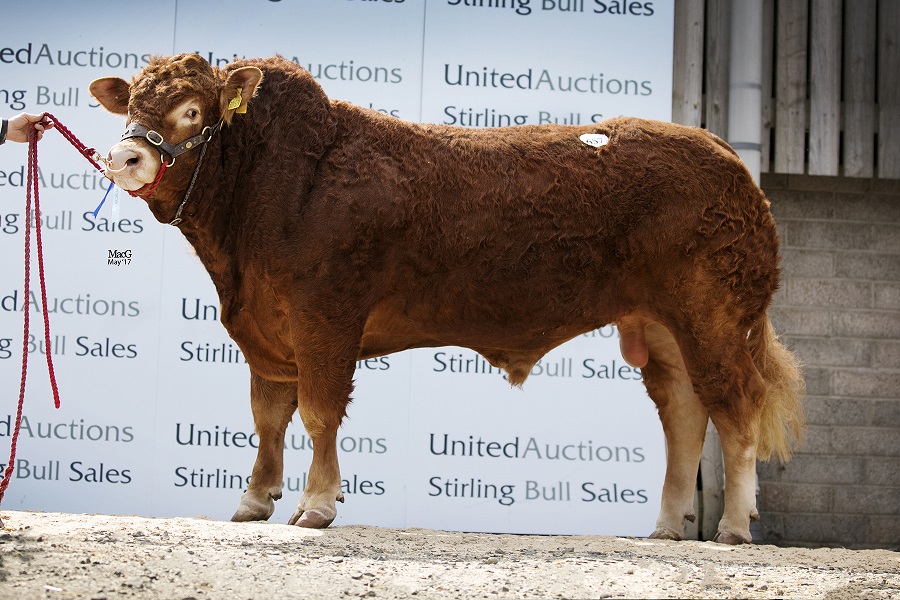 A busy fortnight of Limousin sales kicked off in solid style at Stirling on Monday May 1st when 51 out of 61 bulls forward sold to average £4025.  The number of bulls sold was up by eight on the year with the 51 being the highest number sold across the breeds at this multi-breed sale day fixture held by United Auctions at Stirling Agricultural Centre.

Leading the way, and continuing the herd’s prolific sale form at Stirling, was the 7200gns paid for the September 2015 born Goldies Liam from Bruce Goldie, Townfoot, Mouswald, Dumfries.  Goldies Liam is by the herd stock sire Foxhillfarm Irishlad and is out of Goldies Eva.  With plenty of performance in the pedigree Goldies Eva is out of Rosabelle who herself has bred a Champion at Perth and has had progeny up to 13,000gns.  Purchasing the top price was commercial producers A&H Sim & Son, Rorandle, Monymusk, Inverurie.

Remarkably this is the fourth consecutive Limousin bull sale at Stirling that the Goldies herd have topped.  Adding to this recent run the herd has bred the mother of the top price bulls at Stirling in both February and May 2017, Stirling in October 2016, and Newark in April 2017.  The Goldies team now heads to Carlisle for the sales on May 5th and 6th where they have six bulls and twelve heifers for sale.

Commenting on the Stirling sale, BLCS Chief Executive Iain Kerr said:  “Efficiency and performance is the name of the game.  Limousin really is the breed with the premium built in for commercial producers who are looking for efficient, easy-calving, cheap-to-keep cattle.  The industry requirements for weight specification at slaughter, age to slaughter, and carcases hitting the target grades, fits the breed extremely well and is driving this strong demand for Limousin genetics.  To sell more bulls on the year at Stirling is a real positive and we now head to Carlisle at the end of the week where there are 216 bulls and 200 Limousin females on offer”.

Taking the next top two prices of 6500gns and 6400gns Messrs JR MacGregor, Dyke Farm, Milton of Campsie, Glasgow.  The first of these was Dyke Lino.  A heifer’s calf this October 2015 born bull is by Netherhall Gilbert and is out of Dyke Ina.  Again full of performance Netherhall Gilbert has previously sired the top price at the June 2016 sale at Carlisle.  On the dam line Dyke Ina’s mother, Dyke Davina, has produced calves selling up to 9000gns (Dyke Gambler).  This bull was bought by the noted pedigree breeder and commercial producer Mr J Thomson, Hilton of Beath Farm, Kelty, Fife.

In the pre-sale show, judged by Michael Norman of the note Norman herd, Little Orton Farm, Carlisle, Dyke Lino had been placed as Supreme Champion. Speaking afterwards Michael Norman said:  “The Champion was the most balanced bull in the show ring.  He was clean through middle, had a good top, and carried good width and second thigh. Carrying the most style on the day he had a beautiful breed head. All over it was very much a good show of bulls with plenty of choice for the commercial breeders.

Regularly featuring amongst the top sale prices and the championship placings this was the 65 cow Dyke herd’s first Supreme Champion at Stirling.

Selling at 6400gns from the MacGregors was Dyke Luke.  Second in his class this bull is another by Netherhall Gilbert who was himself purchased for 8500gns.  Dyke Luke, who is also a heifer’s calf being out of Dyke Icicle, was bought by H&R Davidson who runs the Corsairtly herd at Corsairtly Farm, Keith, Banffs.  Earlier the day Messrs MacGregor also sold Dyke Laurel for 4500gns to M Bignal, Smaladh, Isle of Islay

Back in the action at 6200gns was Goldies Legionaire from Bruce Goldie.  Entirely homebred this September 2015 born embryo calf is by Goldies Fantastic and is out of the Ampertaine Bravo sired Goldies Dove.  Legionaire who is a full brother to Goldies Lordofthering, the top price at the Stirling February 2017 Limousin sale, was purchased by J&R Semple, Netherton Farm, Dalrymple, Ayrshire.  The Goldies also sold Goldies Legion, the same way bred as Legionaire for 4500gns to S&M Dalgleish Ltd, Balgownie Mains, Dunfermline.

Another prolific seller at Stirling Limousin sales is the local Spittalton herd of Andrew Burnett, Upper Spittalton Farm, Blair Drummond, Stirling.  Once again enjoying a good day with a big line-up the Spittalton herd sold eight bulls to gross 33,000gns.  Heading their consignment at 6000gns was the October 2015 Spittalton Lancaster.  This calf, with another good beef value of LM+45, is by the AI sire Bolide and is out Spittalton Emma.  Heading north Spittalton Lancaster goes to A Sime & Son, Bruceland, Elgin, Moray.

Three lots later Spittalton Lotus, who had stood second in his class to the Champion, made 5800gns when selling to J&J Wyllie, Knockhouse Farm, Crossford, Dunfermline.  Also an October 2015 bull, Spittalton Lotus is by the AI sire Ampertaine Foreman and is out of Spittalton Iris, a Haltcliffe Vermount daughter.  Further Spittalton bulls sold included prices at 5000gns and 3500gns (twice).

Near neighbours to Spittalton, Messrs D&L Graham, Mains of Burnbank, Blair Drummond, also made 5800gns when selling Burnbank Ladiesman.  This bull is by the AI sire Huntershall Gladiator and is out of Burnbank cheeky, a Grahams Tycoon daughter.  A bull with a beef value of LM+45, Burnbank Ladiesman was bought by J&A Galloway, Lochlyoch Farm, Carmichael, Biggar.

Selling a clean sweep of five bulls to gross 19,500gns was the Tweeddale herd of  Jonathan Watson, Bowsden Moor, Berwick Upon Tweed, Northumberland.  Leading the Watson’s offering at 5500gns was the first prize winner Tweeddale Luckystrike.  An embryo calf Luckystrike is by Goldies Terence and is out of the Haltcliffe Doctor daughter Tweeddale Horny.  Buying this October 2015 bull was J Orr & Son, Randerston, Kingsbarns, Fife.  Also from the herd was the Reserve Supreme Champion Tweeddale Landmark who was the first prize winner in the first class.  This bull is by the Foxhillfarm Irishlad, the same sire as the day’s top price and a bull in shared ownership with the Goldies herd.  Landmark’s dam is Ballerine who was bought as an in-calf heifer from France and has had progeny sell up to 6700gns.  The Reserve award is the first major Limousin sale award at a Stirling sale for the Tweeddale herd which consists of eighty pedigree cows and twenty recipients.