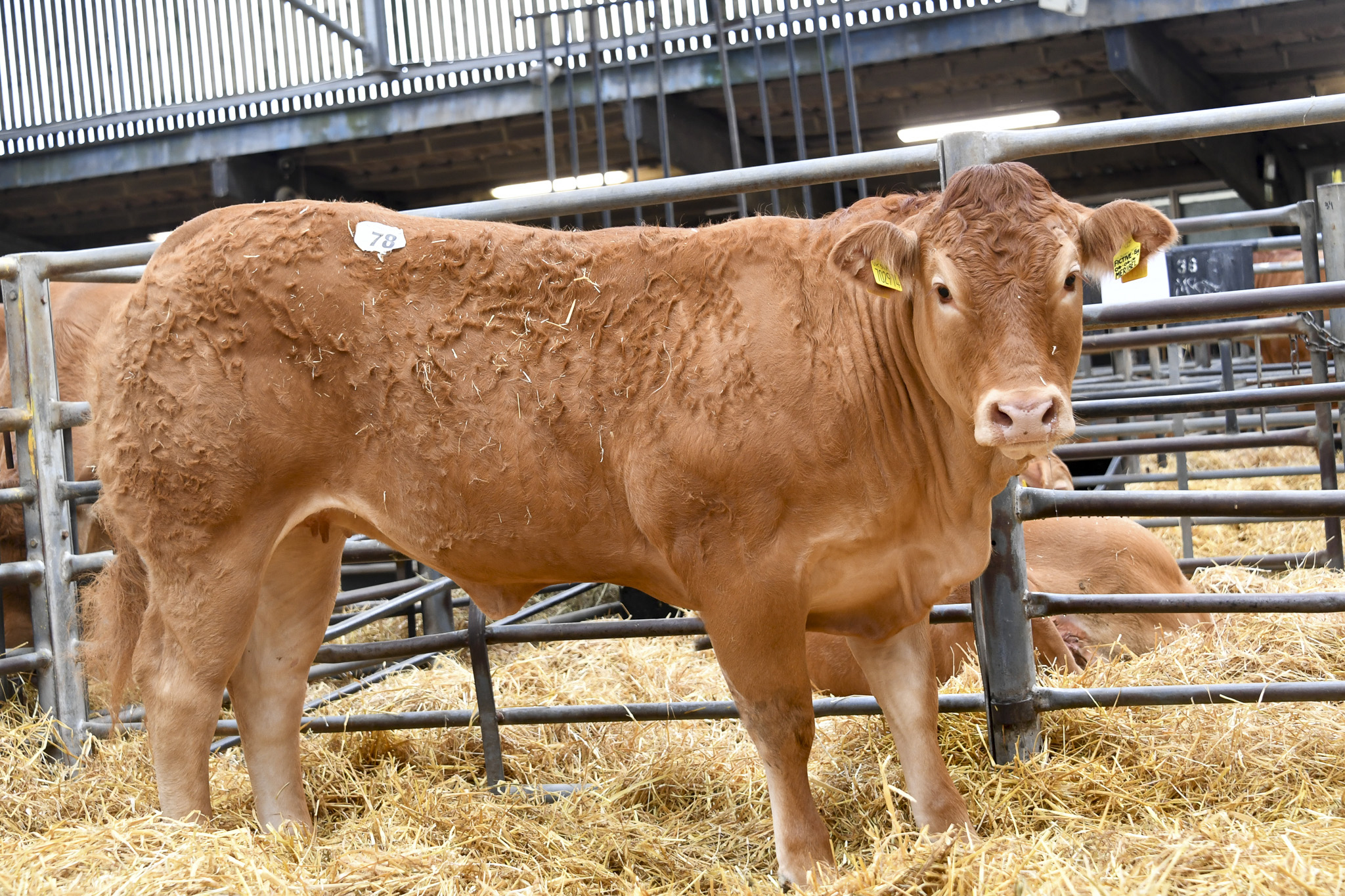 The BLCS breeders sale at Carlisle on Friday 7 July featured consignments from The Ronick, Stephick, Rachels and Lodge herds. All in all 77 lots came into the ring to meet a solid trade. Leading the way from the Ronick Herd of Messrs R Dick, Mains of Throsk Farm, Stirling was the April 2016 maiden heifer Ronick Meribel. By the 17,000gns Rathconville Eugene out of Fictive this quality heifer is described as a muscle machine with a great degree of femininity. She was bought by Steven Wilson, The Butchers Shop, Corby Hill, Carlisle, for his Impulsive herd.

The next leading price, 8,500gns went to a served heifer from the same herd, Ronick Ladida. By the renowned, consistent breeder Ampertaine Elgin out of the successful Ronick Ida she is a heifer that displays some real power and has been recently served by Broadmeadows Cannon, one of the most prolific bulls in the history of the BLCS. She was purchased by T W Oliver, Cawfields, Haltwhistle, Northumberland for his Cawfields herd.

All in all 49 females from the Ronick herd went through the ring. While over the years the herd has produced many quality sires which have gone on to breed with great success, some are still leading the way, in recent years the main focus for the herd has been in breeding quality females. As a result, with ever increasing numbers it became necessary to sell a selection of established, successful bloodlines. This sale was the third such event for Messrs Dick, the last being some nine years ago in 2008.

Including the top two priced females a total of 8 lots from the Ronick herd made over 4,000gns. An outstanding young heifer Ronick Modesty, just 12 months old made 7,500gns. Sired by Rathconville Eugene, so half-sister to the top priced Ronick Meribel, she is out of Ronick Flossy. Taking her home was Iain Graham, Rose Castle Farm, Dalston, Carlisle.

The served January 2016 born Ronick Maiden was knocked down to TW Bell & Son Ltd, Hilltop Farm, St Johns in the Vale, Keswick for 6,800gns. Described as a heifer with style, muscle and pedigree she is also by Ampertaine Elgin but out of Ronick Elusive. Elusive is regarded as being one of the top five cows in the Ronick herd, three quarter sister to 20,000gns Ronick Honey who won Champion at Red Ladies Day.

Overall averages from the Ronick sale

The third top price on the day was a 2008 born cow with her calf at foot Rachels Desire from Messrs D & M L P Woolhouse Rachels herd. A total of 18 lots from The Rachels herd went through the ring on the day. The sale, which has come about due to the family recently losing some grazing, gave buyers the opportunity to purchase some high quality stock from a long established herd with performance and carcase characteristics at the centre of its breeding strategy. Rachels Desire and her November 2016 born heifer calf Rachels Misty by Millington Fiat was knocked down for 8,000gns to Millington Limousin Ltd, York. By Ronick Upshot out of Rachels Babe she ran again with Millington Fiat in January of this year.

J & I Lindsay of Carluke, Lanarkshire purchased the next two top priced lots from the Rachels herd, both cow and calf outfits. The hammer went down at 3,500gns for Rachels Jane with her December 2016 bull calf by Millington Maximus at foot. Jane, a May 2014 born first calving heifer, by Proctors General out of Rachels Fabulous, also ran with Millington Fiat in January this year. Rachels Inspire and her November 2016 born heifer calf by Rachels Dynamite, Rachels Muffin sold for 3,400gns. The May 2013 born cow is by Vagabond out of Rachels Cheri.

A further three lots from the Rachels herd made over 3,000gns.

Averages from the Rachels sale

A small consignment of stock from the Stephick herd was brought before buyers. This was the first production sale on behalf of Stephanie Dick and as such the first opportunity to buy any Stephick females to be marketed for sale. The Stephick herd runs alongside the Ronick herd, using selective AI to produce quality males and females. The herd won the Scottish Limousin Club small herd competition in 2016.

Out of the four lots to be offered, the top price of 6,200gns went to the January 2012 cow Stephick Hallelujah with her December 2016 heifer calf Stephick Merry at foot. She is by Fieldson Topaz out of Bastille, one of the herds show successes. Her heifer calf is by the 45,000gns Ampertaine Jamboree who was purchased as a stock bull in October 2015. With exceptional calving figures he is the son of the noted Ampertaine Gigolo. Hallelujah went home with Iain Graham, Rose Castle Farm, Dalston, Carlisle.

Averages from the Stephick herd

Six maiden heifers from Messrs W & A Callion’s Lodge Herd also found new homes. The top price of 3,800gns went to the April 2016 born Lodge Mirage. By Cloughhead Charlie, who carries two copies of the double muscle gene. Out of Lodge Image she was knocked down to JWT Knaggs, East Newbiggin Farm, Darlington. She has a strong pedigree, Lodge Image grand dam was one of the top breeding females in the Lodge herd. She won her class at the Royal Highland Show three years in a row, 2002, 2003 and 2004. At 3,200gns, Lodge Molly went to W Orme, Home Farm, Askrigg, Leyburn. A January 2016 very well grown correct heifer her dam, Lodge Shirley, by Ronick Gains, is one of the herd favourites and is still breeding in the herd at 16 years of age. Lodge Molly is by Glenrock Humdinger.

Averages from the Lodge herd: