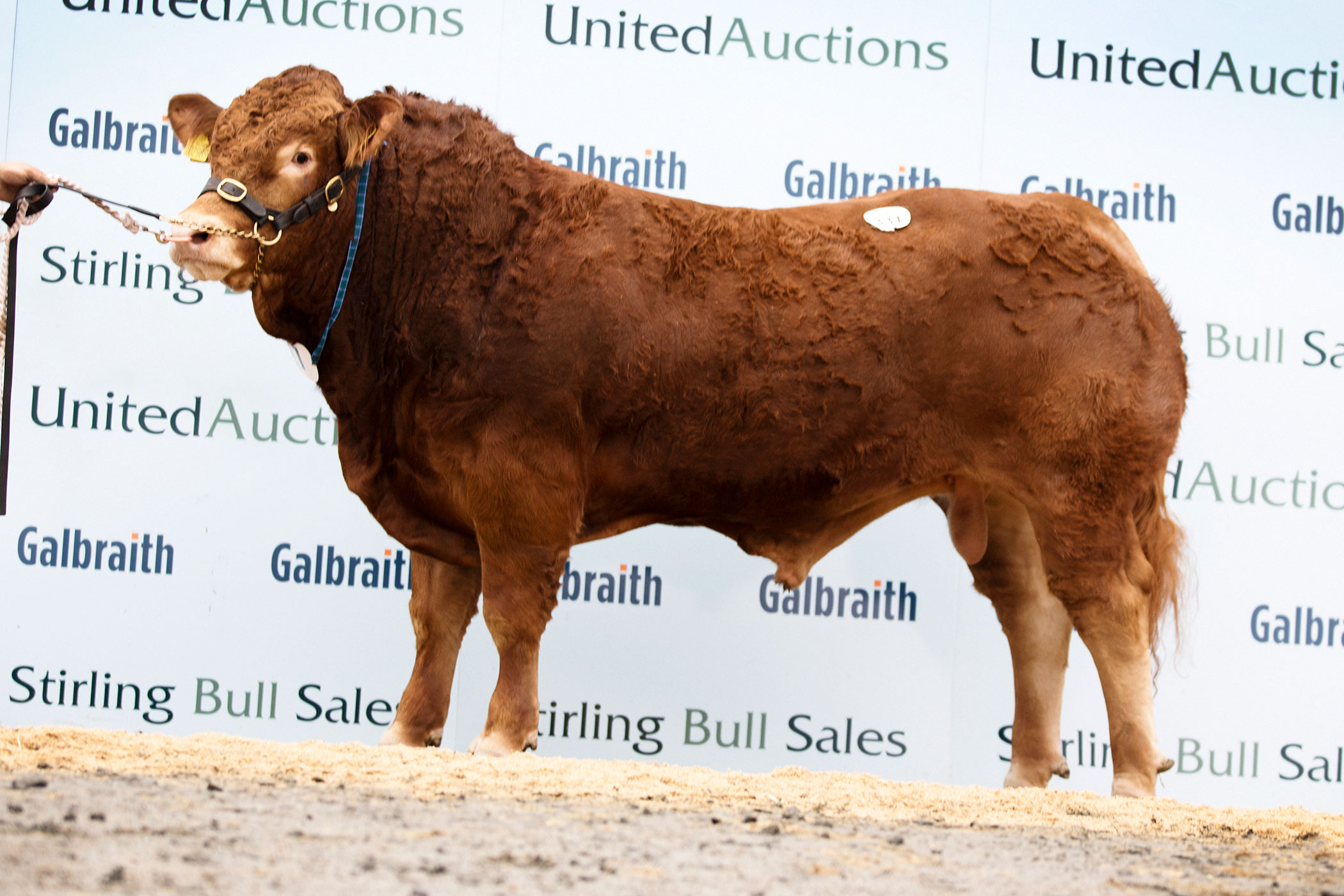 The April 2016 born Ronick Mckinley from the Dick family, Mains of Throsk Farm, Stirling made 11,000gns to lead the British Limousin Cattle Society’s Sale held at the Stirling Bull Sales on Monday 23 October 2017.

Mckinley is from the herd’s stock sire Wilodge Granville, a Wilodge Vantastic son, and is out of Ronick Grace, who is from one of the families favourite cow lines. Purchased at Carlisle in October 2012 for 7,000gns, Granville’s dam is the Toubib daughter Wilodge Amethyst who shares maternal ancestry with Wilodge Cerberus. Commenting on achieving the top price Stephanie Dick said “we are delighted with the way today played out, Mckinley has always been one of our favourites in the herd”. She added “While we haven’t taken him on the show circuit, he is smart powerful bull, I have no doubt he will go on to serve his new owner very well”. He was knocked down to noted commercial producers and previous purchasers from the Dick family, D Walker and Sons, Camregan Farm, Girvan, Ayrshire.

Commenting on the sale BLCS Chief Executive Iain Kerr said:  “Commercial producers are homing in on the Limousin breed which has focused and worked on carcase traits, maternal traits and feed efficiency. These are the core economic drivers and there has been a recognition of that by commercial producers.  While subsidies last, producers are making capital investments in the future of their herds and beef enterprises” he said.

“Stirling today has seen a focus on bulls with good easy calving figures.  That has been a key driver at Limousin sales in the last fortnight.  This is not a breed of extremes and we’re seeing a very defined type of typical modern Limousin”.

Miss Dick described the show and sale at Stirling as the family’s “best at Stirling in years” and leading the sale was the icing on the cake for the family. Their April 2016 born bull Ronick Moose had taken the crown as Overall Male Champion in the Society’s pre-sale show on Saturday 22 October. He was knocked down to G T & S Coghill, Birsay for 6,200gns. He is also by Wilodge Granville, but out of Ronick Fallise. In placing him as Champion judge Mr Chris Pennie, of the noted Sarkley Herd, Montgomery, commented that he had “spotted him straight away when he came through the Intermediate classes”. He went onto say “I liked his smartness in the ring; he is a powerful clean bull with real class”.

Other bulls from the Ronick herd went under the hammer at solid prices. Ronick Montgomery was knocked down at 8,200gns to regular Stirling buyers L D Carr, Rushden, Northamptonshire. Montgomery came to Stirling with a super pedigree behind him; by Stephick Hero out of Ronick Glossary he combines Wilodge Cerberus, Ronick Gains and the Janita family. Ronick Maine sold for 6,500gns to Ballintomb Farm, Morayshire. The June 2016 born bull is another by Wilodge Granville but out of Ronick Hainsi.

Selling at 9,000gns, the second leading price was the pre-sale Junior Champion and Overall Reserve Champion Whinfellpark Madora from Messrs Jenkinson Clifton Moor, Cumbria. The May 2016 born bull is by Lowerffrydd Empire, the October 2010 Supreme Champion at Carlisle, and out of Whinfellpark Genevieve. He was knocked down to W Nelson & Co, West Brackly, Kinross.

The Junior Championship in the pre-sale show was a clean sweep for the Jenkinson stable, with Mr Pennie placing Whinfellpark Midas as Reserve. The April 2016 born bull is by the Overall Champion at Carlisle back in May 2015, Foxhillfarm Jasper, and out of Whinfellpark Harmony.  Jasper had numerous victories in the 2015 show season, including being crowned Supreme champion at the Royal Highland Show, Male and Reserve Junior Champion at the Great Yorkshire and the same at the Royal Welsh Show. Midas went home with Matthew Jack, Carriston, Fife for 3,800gns.

Coming in at 8,500gns was the pre-sale Senior Reserve Champion Anside Maximus from Mr and Mrs Irvine, Drummuir, Keith. A Powerful Irish son, Maximus was Reserve Junior Champion at the Scottish Limousin Grand Prix earlier in the year. He was knocked down to D Geddes, Netherton Farm, Aberlour. When the hammer went down on Maximus this consolidated what had also been a sound day for the Irvine family. Earlier in the sale two more Powerful Irish sons made solid prices. Anside Lomnu, a November 2015 born bull out of Hidscales Ertha sold to the Smith family, Fallaw Farm, Inverkeilour, Angus for 8,000gns and the December 2015 born Anside Lynx out of Anside India went home to R W Cameron & Son, Wester Bonhard for 5,000gns.

The hammer went down at 8,200gns on Harestone Luke from Mr Neil Barclay, Insch.  The December 2015 born natural calf is by Crossdykes Hercules out of Clarkton Via. He went home to A Sime & Son, Bruceland, Elgin.

There were plenty of bulls selling between 4,000gns and 7,000gns, further providing evidence of the prevalence of commercial buyers by the ring. At 6,800gns was Shannas Magnum from Mr and Mrs Penny, Peterhead. By Goldies Emperor out of Shannas Flossie he was knocked down to J Buchan, Torrax, Angus. Next up, at 6,600gns was the April 20016 born Maraiscote Meerkat from Mr J Nimmo of Bogside Farm, Wishaw. By Virginia Andy out of Maraiscote Gopeep he made the journey home with J Innes & Sons, Huntly, Aberdeenshire.

A quartet of bulls made a very respectable 6,000gns. The first at this price was the Haltcliffe Vermount son Burnbank Mastermind from Messrs Graham, Mains of Burnbank Farm, Stirling. The February 2016 bull, out of Burnbank Fainsi, was knocked down to J & A Galloway Ltd, Biggar, Lanarkshire. Next at this price was another from Mr Nimmo, Maraiscote Muzz, by Roundhill Hustle out of Maraiscote Fizz was sold to S Adams, Stranraer.  Following this was the April 2016 born Goldies Mazda from Bruce Goldie at Townfoot. He is by Goldies Fortress out of Goldies Christmas, who is the dam of Goldies Intelligent, the Junior Champion at Stirling back in February 2015. Following on quickly was the next bull in the ring Elrick Magnificant from Mr M J Massie, Mains of Ekrick, Ellion. By Rahoney Geoffrey out of Elrick Dandelion, who has sold bulls into five figures, he was bought by the Scottish Government for their bull stud at Inverness.

The sale saw a small cohort of females come forward. Again solidifying the message about the commercial demand by the ring, eight out of the nine available heifers found a new home. Topping the sale was Goldies Meg from Bruce Goldie at 3,000gns. By Goldies Fortress out of Goldies Foxtrott, she had been tapped out as the Champion female in the pre-sale show the day earlier. She was purchased by Mr and Mrs Irvine for their Anside herd in Drummuir.