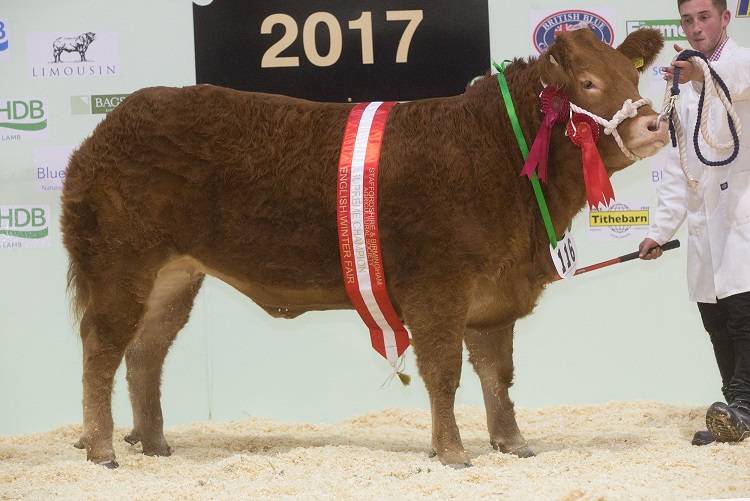 Saturday 18th and Sunday 19th November saw the 2017 English Winter Fair held at Staffordshire County Showground. From a quality show forward, Limousin sired cattle once again dominated the results board in winning many of the major titles on offer.

In front of a sizeable crowd the red heifer Queen B from, Edwards Bros and J M Rowlands, Corwen, Denbighshire lifted the Heifer Championship before moving on to take the Supreme Overall Championship. The Champion animal was tapped out by the joint judges for the day in the shape of Mrs Wendy Pickard, Gaddesby, Leicester and Mr Dai Thomas, Llanwen, Lampeter. Commenting on their Champion Mr Thomas said, “this heifer came into the ring showing real class, with a level top and demonstrating a huge degree of style she was a worthy winner amid a strong cohort of exhibits”. In the traditional post-show sale she went onto sell for £7,500 to Joseph Morris Butchers, a Midlands based family business now in its third-generation.

Bred by the Bowen family Penthryn, Welshpool, the April 2016 born heifer is no stranger to success, she took the Baby Beef Championship at her first outing at Borderway Agri-Expo in autumn 2016 and then followed that up with the Reserve Baby Beef title at last year’s Welsh Winter Fair. She is sired by the highly successful bull Liscon Bigshow, the main herd sire for the Bowden family, who has bred numerous title winning cattle over the years.

In what was a one-two for Limousins the Reserve Overall Supreme Champion came in the shape of Dolderwen Mercedes from Phil and Sharon Sellers, Linconshire. Mercedes had come all the way through from winning the Champion Purebred Limousin title and the Overall Championship in the Pedigree section. Bred by G Jones and Co, Builth Wells, she is sired by the Saphir son Llodge Hamlet and out of the Fieldson Alfy daughter Dolderwen Indulgence. Phil and Sharon purchased the April 2016 born heifer from the Brecon sale of show potential cattle back in February 2017 for 3,100gns.

Making it another first and second for Limousin was Cowin Miky who took Reserve Champion spot in the Pedigree section. From I J Phillips, Carmarthenshire the July 2016 born steer, bred by Dyfan and Carol James, also from Carmarthenshire, is sired by Netherhall Jackpot out of Cowin Indiana.

The Homebred and Fed Championship was won by T A and L C Lyon and Son, Thurlby, Bourne, Lincs with their May 2016 born heifer Beau. This win marked the second successive year that the family took this accolade having won with Jasmine in 2016. Beau is sired by the family’s stock bull Ironstone Hornblower, a Rathkeeland Dylan son, who is breeding very well for them.

The Steer Championship was won by Jimmy from Mark and Sarah Harryman, Pickering. The May 2016 born steer, by Keskadale Fame out of a Limousin cross cow was bred by Messrs Richardson of Gatesgarth, Cumbria, and purchased by Mark and Sarah at Cockermouth Market. In what has proved to be a successful autumn Jimmy came to Stafford on the back of taking the Reserve Champion spot at both the recent Agri-Expo in Carlisle and Countryside Live event in Harrogate. Reserve Steer Champion was also won by a Limousin cross animal in the shape of Highland Lad which was exhibited by Lin Calcraft, Devon. Highland Lad is a February 2016 born steer that was bred by Balfour Bailie, Tankerness, Orkney.

Taking the Championship position in the Limousin calf section was Trisant Navigator from G and E Jones, Anglesey. The January 2017 born young bull, bred by the Jones family, stood first in the Junior Bull class to his stablemate Trisant Never Say Never. He is by Sarkley Herald out of Trisant Elliw. Standing Reserve Champion was the Junior Heifer winner Dinmore Naturelle from Paul Dawes, Hereford. Also home-bred, the January 2017 born heifer is by the world record Trueman Jagger out of Dinmore Elle.

Rounding off an excellent two days for the Limousin breed, in the Royal Smithfield Club National Festival of Meat Competition the Champion Beef Rib came from a Limousin heifer. Judged blind by Mr John Temple, former Honorary President of the BLCS and of the Roughley Limousin Herd, the winning rib came from I R and A D Wildgoose and Sons, Skarcliffe Hall Farm, Chesterfield, Derbyshire. John placed a carcase from a 17-month old heifer out of a Limousin dam from F Page, Northants, as Reserve Overall Champion Carcase.