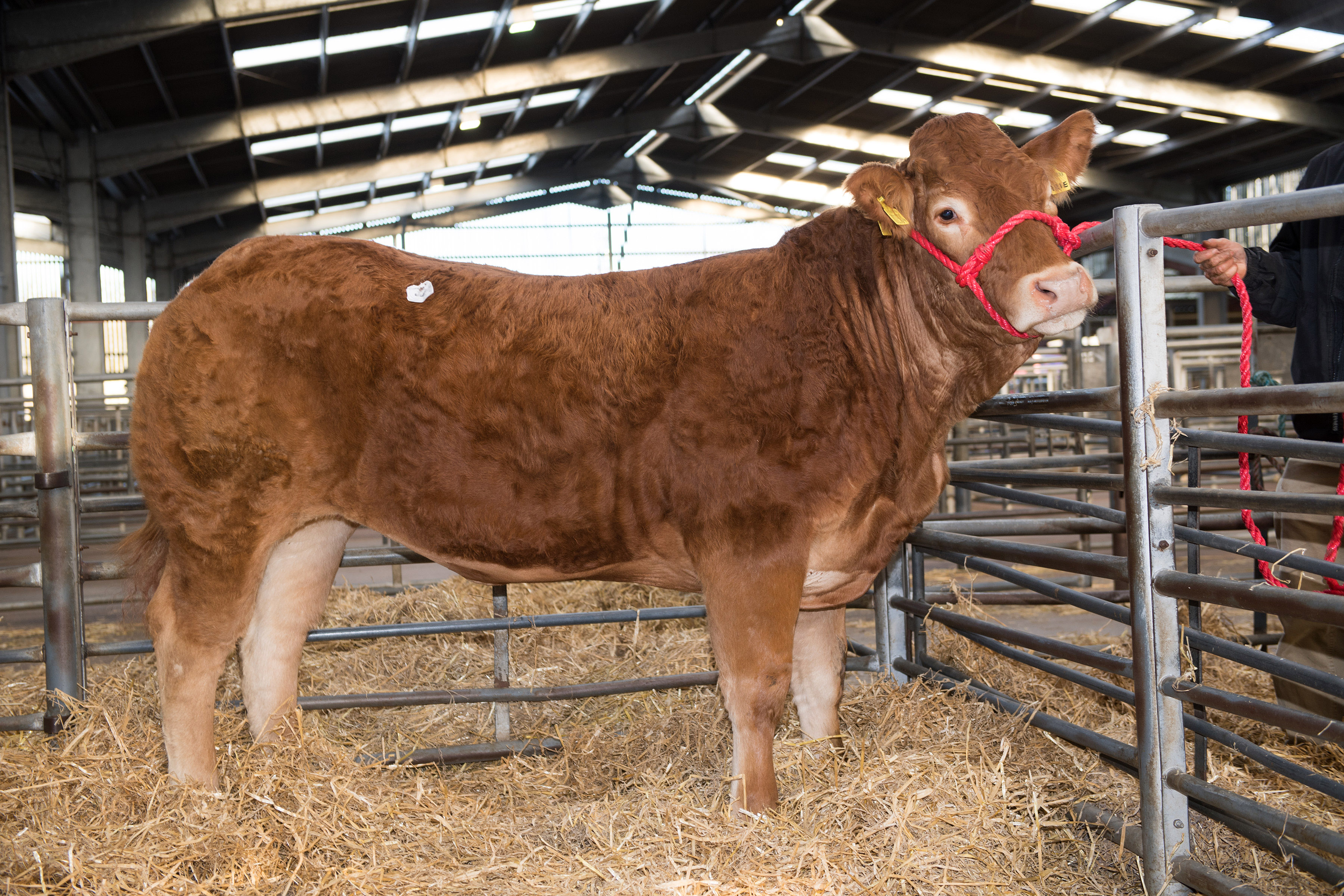 The major reduction sale from the Haltcliffe Limousin herd of Craig Ridley, Wigton, Cumbria on Friday 26th January didn’t disappoint the crowd who packed into Borderway Mart, Carlisle. With the herd being one of the foremost pedigree names in the United Kingdom, synonymous with prize winning at Limousin events, there was a palpable buzz by the ring as buyers filtered into their positions.

Cow families are the bedrock of all successful herds and none more so than that of the Ridley family at Haltcliffe. The sale included progeny from notable cow families, Renoncule, Romance and Romany amongst many others. Heading up the sale at 8,000gns was the first in-calf heifer to come into the ring, a very smart lot from the Romany family in the shape of Haltcliffe Maria. Born January 2016 she is by Haltcliffe Hitec out of one of the herd’s top cows, the Sympa daughter Haltcliffe Bianca. Maria is in-calf to the prize winning bull Grahams Michael who Craig purchased from R & J Graham, Stirling, in a two way split with E W Quick & Sons at Carlisle in October last year for 20,000gns. Making the successful bid was Richard Bartle, Hereford. The deal will see the classy heifer shared between the Absolute Herd he runs in conjunction with Mary Cormack and the Dinmore Herd of Paul Dawes.

Commenting on his purchase Richard said “I like the bloodline of this heifer very much. She came into the ring with a great outlook, stylish, long and clean, just our type of animal” he went onto say “She was the only beast in the sale PD’d in calf to Grahams Michael, a bull I particularly like, so I had to be sure I was taking her home”

Demonstrating the quality of the females in the sale, and the robust demand buyers are continuing to show for the breed, a third of all females finding new homes fetched 4,000gns or more. It is clear that the momentum for Limousins, which was so well demonstrated last year, has not abated in any way. Across the Society sales during the autumn last year it was evident that there was a big demand for easy calving genetics. The indication from the Haltcliffe sale is that, as expected, it has carried forward into this year. Added strengths in feed efficiency, age to slaughter, and the ability to produce high yielding carcasses at the target weights and grades required by the market place also positions the breed strongly.

Following on two lots fetched 6,500gns. First to sell at this price, to an undisclosed buyer, was a tidy cow and calf outfit, the Sympa daughter Haltcliffe Gina and her eight month old heifer calf by Ballyrobin Joop, Haltcliffe Nellie. Later in the sale was the January 2016 born in-calf heifer Haltcliffe Mel, knocked down to K & S Williamson for their Blackwater Herd in Co Tyrone, Northern Ireland. Mel, who’s dam Haltcliffe Fate is a very musclely Haltcliffe Vermont daughter, is PD’d in calf to Ampertaine Elgin.

At 6,200gns came the April 2016 born in-calf heifer Haltcliffe Mirage. By Cloughhead Umpire, a bull who has made a considerable mark in the Haltcliffe Herd, she is out of the Loosebear Fantastic daughter Haltcliffe Image. She was knocked down to Benny Quinn for the Quinn Brothers Killydun Herd in Kilrea, Co Londonderry, Northern Ireland. At the same price came the super young cow Haltcliffe Humble with her six month old bull calf at foot, Haltcliffe Norman. Humble is by the Objat son Cloughhead Ernie and out of the Sympa daughter Haltcliffe Breeze, her young bull calf is by Ducasse. She also made the trip over the water, this time into the Republic of Ireland, in selling to Michael Phillips, Doon West, Co Sligo.

Commenting on the success of the sale Craig said “I am delighted with today’s outcome; it has been a strong sale for the herd and has exceeded all my expectations. It has been a very positive day and I am thankful for the support from all the buyers. I am sure the cows and heifers will all go onto serve their new owners very well”