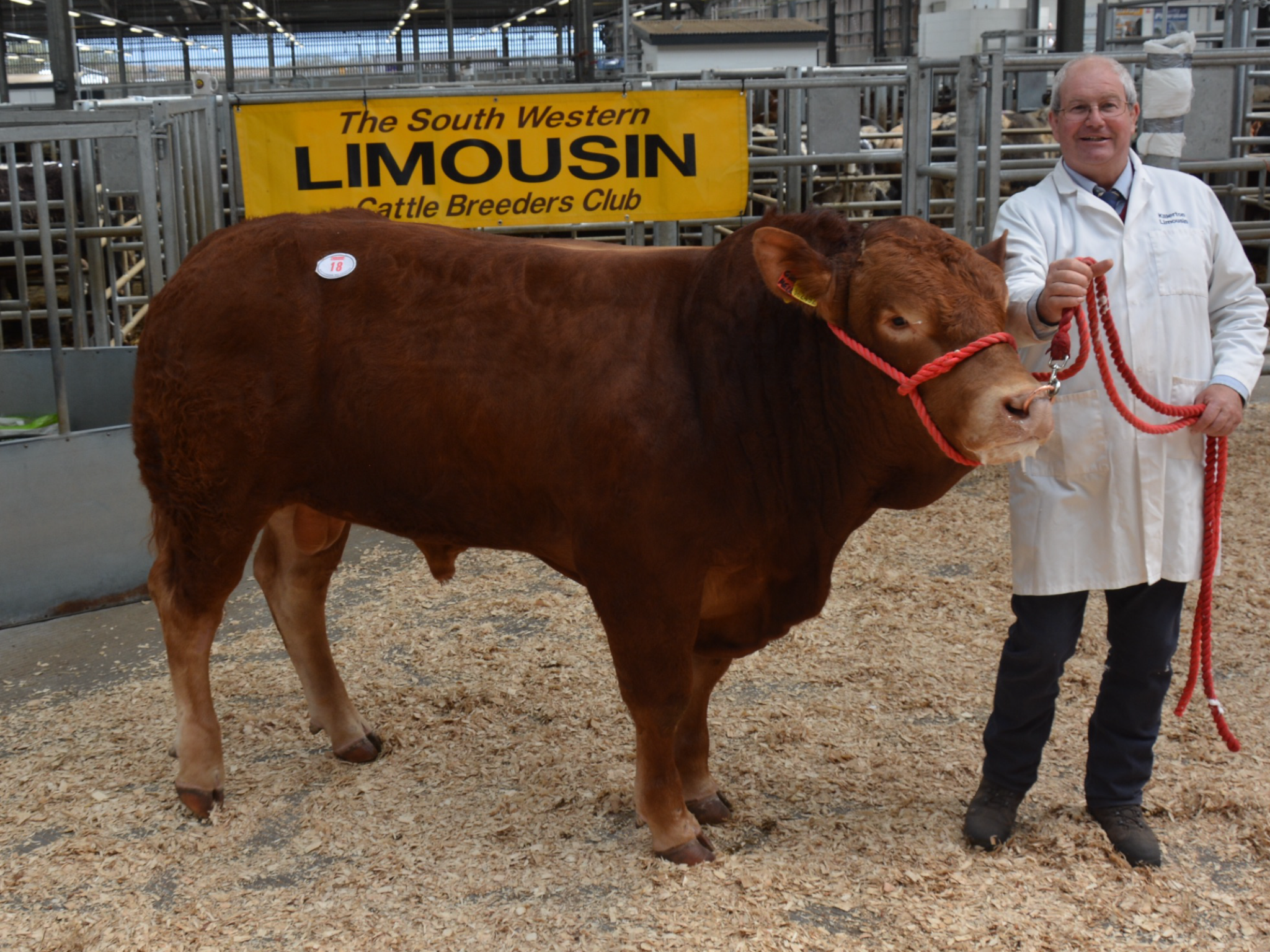 Limousin bulls met with a steady trade at the South West Limousin Club Spring Show and Sale held at Holsworthy Market on Wednesday 25 April. In all five bulls sold to an average of £3087.

The days top price was 3400gns for Killerton Mellow from Mr and Mrs PW and SM Greed, Columbjohn Farm Ltd, Rewe, Exeter, Devon. This November 2016 born bull is by Goldies Jeff and is out of Killerton Gellen. Paying the top price was PL Heard, Oakhampton, Devon.

At 3100gns came Loosebeare MrBump from Messrs EW Quick and Sons, Credition, Devon. Sired by the Sympa son Aghadolgan Emperor, who sired the  Champion at last years fixture, and is out of Loosebeare Canna. He was knocked down to DJ Ward, Winkleigh, Devon.

Two bulls made 2900gns. The first at this price was the opening lot of the day, Arthurs Magic from Arthur Stanbury, Stanbury Farm Partnership, Launceston, Cornwall. This January 2016 born bull, by Emslies Galileo and out of Arthurs Irresistible had a successful 2016 in show rings across the UK, including winning Male Championship and Junior Interbreed Championship at the Royal Bath and West Show. He was purchased by AJ Eggins, Roborough, Plymouth.

Making the same price was another from the Greed family, this time in the shape of Killerton Mighty. The August 2016 bull is by Loosebeare Exmoor and is out of Killerton Flinders. He was knocked down to W Jeans, Saltash, Cornwall.

The hammer went down at 2400gns for Josh Maverick from Mr MA & Mrs D Luxton, Bude Cornwall. The April 2016 born bull, by Loosebeare Docker out of the Redgate Foxylady went home with JJ George and Sons, Falmouth, Cornwall.

In the pre-sale show, judge Kate Lanfear had tapped out Loosebeare Mata from EW Quick and Sons as her Overall Champion. The May 2016 born bull is by Lodge Hamlet out of a great breeding cow Loosebeare Gwyneth. Reserve spot went to the January 2017 born Trueman Jagger son Foxhillfarm Nottinghill from Mike and Melanie Alford, Cullompton, Devon.