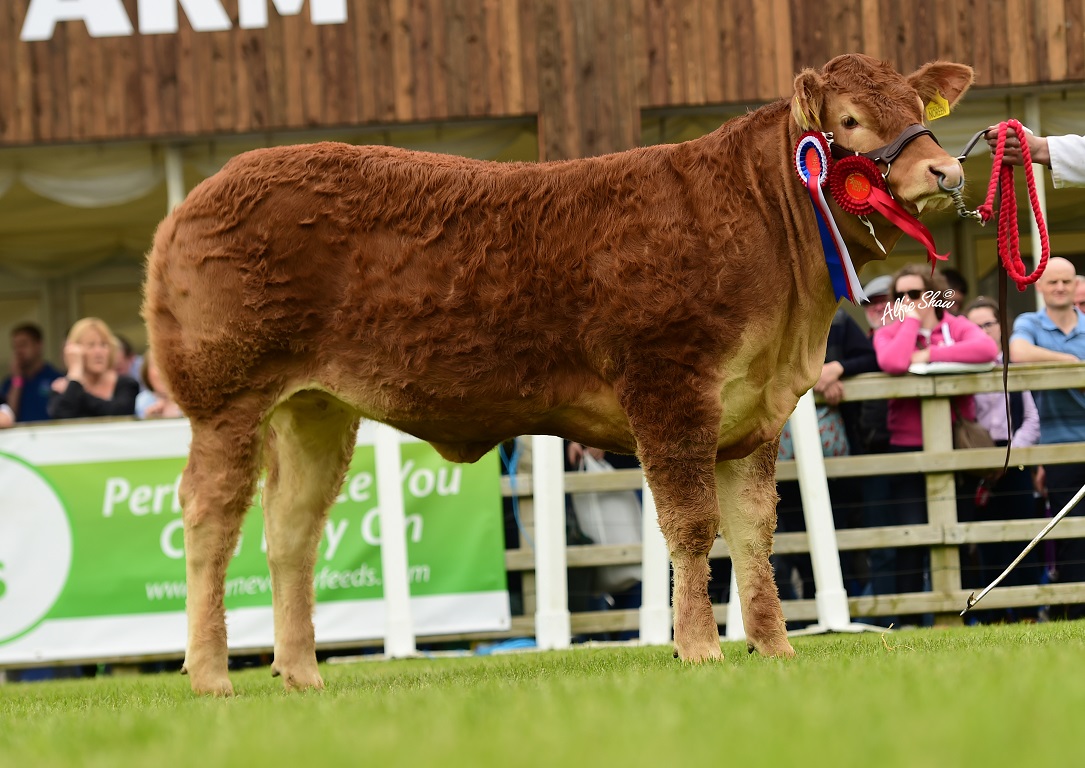 The 2018 summer show ‘major’ season kicked off in spectacular style at the 150th anniversary Balmoral Show on Wednesday 16th May.

Having waited years to win their first Interbreed title in 2017, the good luck continued for the Savage family of Altnamackin, Newry, Co Down. Their stylish 13-month old Limousin heifer Trueman Noreen secured the Trueman team their second Interbreed title in a row, having won with Trueman Lute in 2017.

Day one of the show saw the Limousin judging in front of Mrs Mary Reynolds of the Rhy Limousin herd, Bordon, Hampshire. From amidst some fine competition on a warm and sunny day Trueman Noreen, came through the field after winning the first class of the day. A true poster girl for the breed, she could be seen on enormous posters displayed in the showground by the thousands of visitors to the show. She followed up her Limousin Championship win with the Junior Interbreed Championship before being tapped out at the top of the beef lines after strutting her stuff against fellow beef champions by Scottish based Judge Liz Vance, of Bridgehouse, Whithorn.

Paraded by Jack O’Brien, 13-month-old Noreen boasts the best of breeding, being by the 45th anniversary National Show champion and breed record holder, 147,000gns Trueman Jagger, and out of the 40th National Show champion, Trueman Euphonium, a cow Henry Savage describes as his “pride and joy”.

Of his winner a clearly delighted Henry Snr said “I have always known that she was a special heifer, but in recent weeks she has really blossomed into something remarkable. Euphonium has excelled herself, I have a feeling Noreen could well go onto be our best ever” Henry went onto say “To win our home show for the second year in a row is really something special. Our philosophy at home is to concentrate on a handful of the best cows in the herd and produce the best quality calves we can; Euphonium is one of those cows and Noreen one of those calves”

For the record Trueman Noreen won, Limousin Female Champion; Limousin Supreme Overall Champion; Interbreed Supreme Champion and Best Continental Beef Recorded Heifer. She was part of Interbreed Champion Pair team, the Interbreed Team of Three champions and the reserve Interbreed Team of Five. Henry Snr said “She will be going home with the team and back to the grass at the end of the weekend, she deserves it”

Both Judges had nothing but praise for Noreen, firstly following the Limousin judging Mary Reynolds commented “She is something special, very correct, a great top on her and a beautiful sweet Limousin head. There is huge potential in her, I am sure she will go onto make a fantastic cow”. Then, sharing a similar sentiment, after judging the Interbreed Championship Liz Vance said “She’s so stylish and correct and it’s all there for her age, you can just imagine what she’s going to turn out like when she’s older”

Of the Limousin show in general, which Mary judged in the basking sunshine, she said “It was a super show of cattle, the top ends of the cattle in the ring were fantastic all round. It is obvious why Limousins are the number one beef breed in the UK, meat on legs, they have such great appeal”

In the Limouisn judging it was a 1-2 for the Savage team in the Junior Female Championships as Mary tapped out Trueman Nadine as her Reserve to Noreen. The class winner, born January 2017, is the same way bred as Noreen being by Trueman Jagger and out of Trueman Euphonium.

Standing as the Reserve Overall Champion Limousin to Noreen was the Male Champion Jalex Notorious from James Alexander, Randalstown, Co Antrim. The February 2017 home bred young bull by Bassingfield Hobama out of Haltcliffe Hester had come through the field to take the Junior Male Championship and then the Overall Male Championship, both times ahead of the April 2017 Norman Ely son Derriaghy Noddy from D G Green and Sons, Lisburn, Co Antrim.

Notorious then paired up with a stable mate Jalex Nini, a smart 14-month old heifer also by Bassingfield Hobama but this time out of the Ampertaine Cannon daughter Hudscales Gigi, to take the exhibitor bred Limousin Pairs Championship ahead of a duo from the Savage team in the shape of Trueman Marrianne and Trueman Marley. Both September 2016 born, the Trueman heifers are the same way bred as Noreen and Nadine, by Trueman Jagger and out of Trueman Euphonium.

The Savage team of Henry Snr, Henry Jnr, Phelim, Benedict and Dermot had more to celebrate when they took the Herbert Lusby Memorial Perpetual Challenge Cup for the best group of three Limousin animals owned by one exhibitor. The pairs reserve duo of Marrianne and Marley were joined by yet another Jagger daughter, January 2017 born Trueman Nadine. Reserve spot went to the team from Michael and Kile Diamond who run the Pointhouse herd in Garvagh, Co Londonderry. Their threesome was made up of Pointhouse NJ, an April 2017 born Ballinloan Jaegerbomb daughter out of Pointhouse Jewel, Pointhouse Numberone, a September 2017 born Sympa heifer out of the same dam and Pointhouse Nintynine, a Plumtree Fatastic son out of Ampertaine Ingrid.

Over the following three days, going head to head with the best in show of other breeds, a handful of other interbreed titles came the Limousin way. The Overall Limousin Champion Trueman Noreen and Reserve Jalex Notorious paired up to take on the best pairs teams from all the other breeds under the watchful eye of Sharon Bothwell. As the sun beamed down on the Balmoral showground she tapped the impressive Limousin pair out as Interbreed pairs Champions. Standing reserve was a pair of Commercial winners, one of the pair in the shape of Posh Spice, from JCB Commercials, Newtownards, Co Down, is a Carmorn Cantona son.

The pair’s team, with the addition of Trueman Nadine, paraded into the ring as an imposing group of three. Seeing off the competition from a tidy Charolais team they emerged victorious. The Interbreed Team of Five came next, a new competition within the four-day format Judged this year by Kay Adams of the Newhouse Limousin herd. The Limousin team consisted of the four Trueman heifers, Noreen, Nadine, Marianne and Marley, plus the Limiousin Male Champion Jalex Notorious. Just falling short of a clean sweep, the striking team were tapped out as reserves.