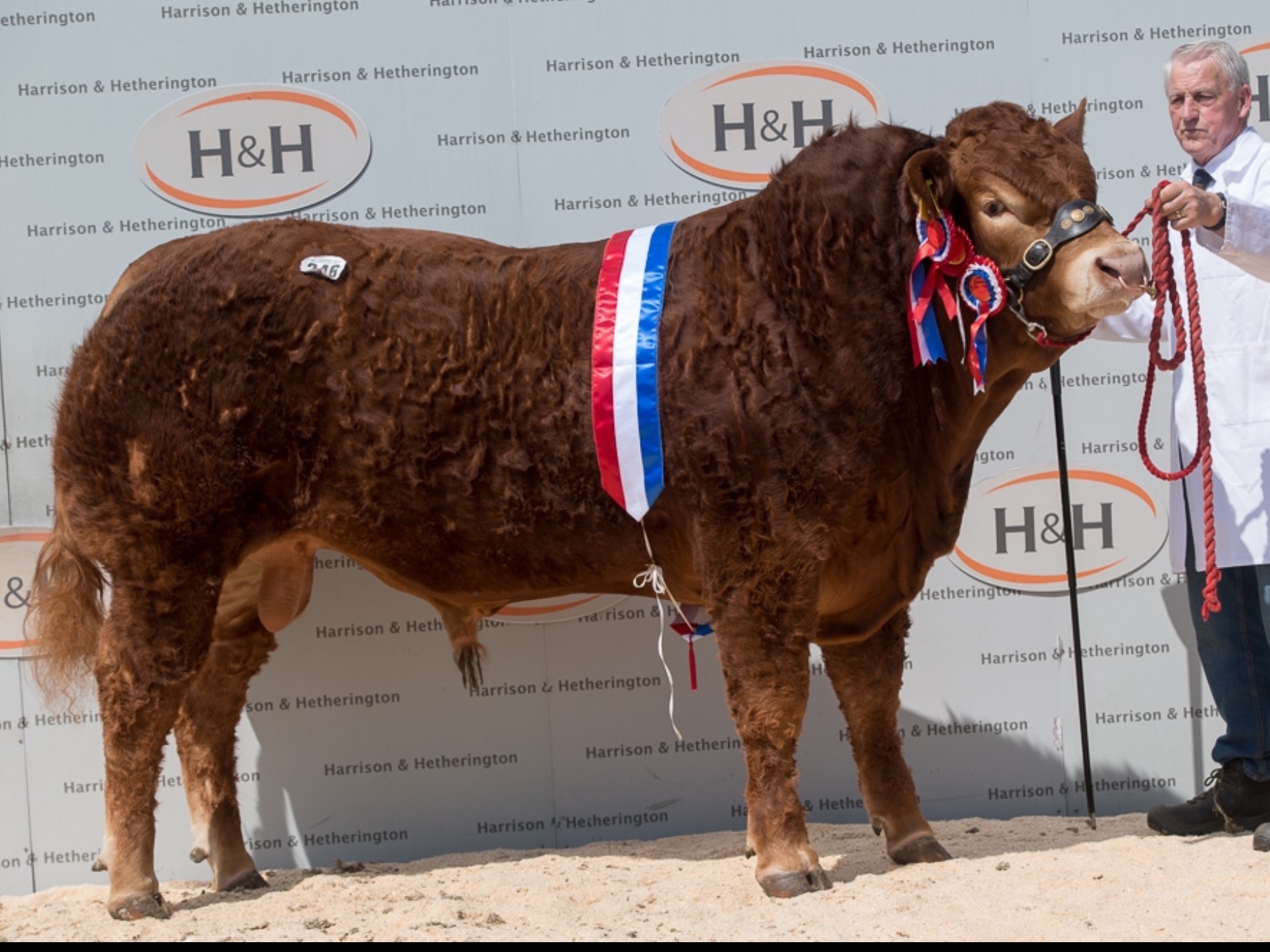 Limousin bulls met with vigorous, robust demand at the British Limousin Cattle Society’s  Spring sale held at Borderway Mart, Carlisle on Saturday 5th May. Once again commercial producers turned up in numbers, in the market to buy, confirming that the breed continues to deliver for the market and is the ‘go-to’ Breed. The sale saw buyers honing in on bulls with strong calving ease and all round performance figures. Trade was given a boost by some stylish breeders bulls bulls which caught the eye of the pedigree audience by the ring

A long list of bulls made five figures and above, some finding a new home with commercial operators. Leading the days trade at 35000gns was the Intermediate and Overall Champion in the pre-sale Show Ampertaine Majestic from WJ & J McKay, Co Derry. The December 2016 born bull is by the Wilodge Vantastic son Plumtree Fantastic and out of Ampertaine Joy, who is proving to be one of the best looking breeding cows in the Ampertaine herd. She is maternal sister to 13000gns Ampertaine Interest. Majestic is Joy’s first calf, his breeding of Plumtree Fantastic and and Ampertaine Abracadabra bred gdam combines muscle, style, milk and calving ease. He was knocked down to Gareth Corrie, Newtownards, Northern Ireland.

Speaking after the sale James McKay said “We are delighted with the sale, this is a bull which we have always thought a lot about, he is full of style and class in every way. Gareth has got a great bull”

At 20000gns came the Swardland Eddie son Twemlows Morpeth from Will and Jackie Forrester, Whitchurch, Shropshire.  Second in his class in the pre-sale show the September 2016 born bull, a natural calf out of Twemlows Hilda came to Carlisle looking his best having been beautifully managed at home by stockman Jonathan Lunn. Morpeth was purchased by George Hutton, Setmabanning, Keswick, Cumbria for his Cloughhead Limousin herd.

Next was Newtack Malster from Grant Morrison, Grange, Keith. The November 2016 born bull, who was third in his class in the pre-sale show, is a natural calf by the Ampertaine Foreman son Artnagullion Jaggerbomb and out of Emslies Insi. He was knocked down to H Annett and Son, Widdrington, Morpeth.