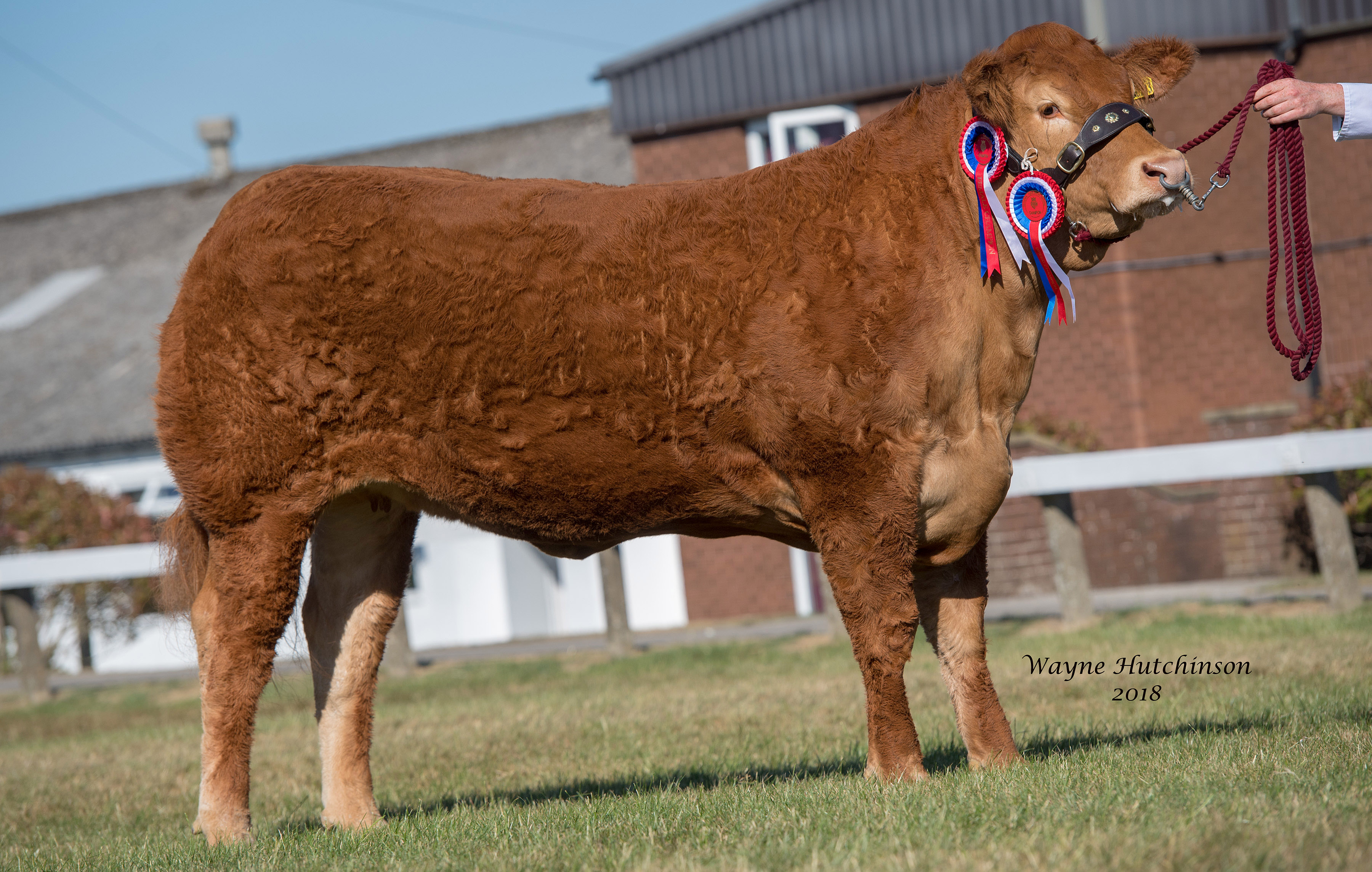 In what turned out to be outstanding weather conditions, the quality of the cattle exhibited at the Great Yorkshire Show at Harrogate on 10th and 11th July proved to be just as impressive and Limousin cattle took a collection of Interbreed titles.

The first day of judging saw British Limousin Cattle Society Chairman Michael Cursiter from the Dwarmo Limousin Herd in Evie, Orkney, soak up the sun in the ring as he evaluated the cattle on the morning of the opening day of the show.

Grahams Melody scooped the Limousin Female Championship then the Overall Limousin Breed Championship on her way to take reserve spot in the Beef Individual Interbreed Championship later in the afternoon when she was put before judge Mrs Vicky Smith from Crediton, Devon. No stranger to success the two-year old heifer from Robert and Jean Graham of Airthrey Kerse Dairy Farm, Bridge of Allan, Stirling, Melody, currently in calf to Goldies Jackpot, came to Yorkshire on the back of a first place in her class and as a member of the winning Limousin Team of Four at the recent Royal Highland Show. In addition to recent success, she had also done very well through 2017 as a youngster, winning her class at the Highland and standing as Reserve Champion, Reserve Female Champion and Junior Female Champion at the Scottish Limousin Grand Prix held at the Dumfries Show in August last year.

An embryo calf by Ampertaine Elgin, Melody is out of the highly successful Millbrook Gingerspice who made history at the 2014 Balmoral Show becoming the first animal to claim the show’s Individual Interbreed crown in three consecutive years. She is full sister to Grahams Michael, also a winner on the show circuit in 2017, who sold at Carlisle in October 2017 for 20,000gns and to Grahams Malibu who made 25,000gns last December at the Red Ladies Sale.

In commenting on her Reserve Champion Mrs Smith said “Melody was turned out beautifully, she oozed quality, style and femininity” she added “it was a tough decision to make, a very close call between her and the eventual Champion”

Speaking from his home after hearing of her success Robert Graham said “The whole team is absolutely delighted to win the Limousin Championship and stand as Reserve Interbreed Champion at the Great Yorkshire Show with Grahams Melody. It is made extra special after winning the Breed and Interbreed Championship at the Highland Show with her stablemate Grahams Niaomi. Melody, from a youngster has always been a stand out animal, winning her class at both the Highland Show and the Great Yorkshire Show last year at only 11 months of age and then taking Junior Champion and Reserve Overall at the Scottish National Grand Prix”. He added “Melody has tremendous presence and style in the show ring and carries all the attributes to make a tremendous breeding female”

Standing Reserve in the Limousin Championship was the April 2016 born heifer Stephick Mistique from Stephanie Dick, Stirling. Mistique had stood second to Grahams Melody all the way through the judging, first in their class and then as Female Breed Champion. She is by the Rocky son Rathconville Eugene and out of Ronick Voici.

Mr Cursiter awarded the Male Limousin Championship to Foxhillfarm Jasper from Messrs Jenkinson, Penrith, Cumbria. The January 2014 born bull that was bred by Mike and Melanie Alford of Cullompton, Devon, led the British Limousin Cattle Society sale at Carlisle in May 2015 when he was bought by Jenkinson Farms for 35,000gns. An embryo calf, Jasper is by the Wilodge Vantastic son Loosebeare Fantastic and out of the Alford’s noted cow Bankdale Alice.

Standing Reserve Male Limousin Champion in Harrogate was a January 2017 born bull from Messrs J M and S P Cooper who run the Tomschoice pedigree herd at Hill Top farm, Dacre, Harrogate in the shape of Tomschoice Navarino. Home bred, this smart bull that took a red rosette at the Northern Limousin Extravaganza on the opening day of Skipton Auction Mart’s annual two-day breed showcase in early May, is by Kaprico Eravelle and out of Tomschoice Filipa.

As the morning of the second day of judging got underway the crowd by the cattle ring basked in the sunshine and were treated to a spectacular display of Limousin breeding in the interbreed group competitions. The Junior Group contest came first in a switch to the schedule to accommodate a visit to the cattle judging by HRH the Princess Royal. An outstanding quartet from the Foxhillfarm team came into the ring to challenge for the Junior Group honours. Natasha, Naomi, Napoleon and Minesagin, who was Reserve Overall Breed Champion at the recent Highland Show, looked nothing short of breath-taking in the bright sunshine. In tapping this team forward, judge Mr Donald Biggar of Castle Douglas described it as an “absolutely tremendous foursome” he commented on their “balance, power and mobility”

This is the second year in a row that the Junior Group Interbreed Championship has been won by a team made of up of cattle entirely from the Alford family and a clearly delighted Mike Alford took to the microphone. After describing the Great Yorkshire Show as the “best show in the entire country” he said “it was an absolute honour for his family to win at Harrogate again”.

In the Senior class, the Limousin entry consisted of the two heifers Stephick Mistique and Grahams Melody plus the four-year old cow Brockhurst Jade from Doug Mash’s Brockhurst herd, based in Buckinghamshire, and the bull Woodroad James from Dougie McBeath and Sarah-Jane Jessop of Stirling. After the royal guest had made her way up the long line of cattle in the ring once again Judge Mr Biggar tapped the Limousin team forward. Adding to his earlier comments he said “both teams were impossible to get past, they were the stand out winners”.

In the always keenly contested Commercial Cattle section it was yet more success for the breed as Limousin’s swept the board. Judged by well-known and highly successful commercial cattle man Blair Dufton of Huntly, Aberdeenshire, Mark and Sarah Harryman of Pickering, North Yorkshire took the Overall Female title and then the Overall Champion rosette with their home-bred April 2017 born black-coated heifer Midnight Star on only her second outing. Out of a Limousin cross cow Midnight Star is sired by the Harryman’s stock bull the Ampertaine Elgin son Craigatoke Jackpot who they purchased for 15,000gns at Carlisle in May 2016.

Overall Reserve spot went to another April 2017 born Limousin cross heifer, this time in the shape of a red-coated beast from S and L Bett of Stirling. This heifer had stood as Reserve to the Overall Champion in the female judging. Taking the Champion Commercial Steer rosette was a 13-month old exhibit from Mike and Melanie Alford.