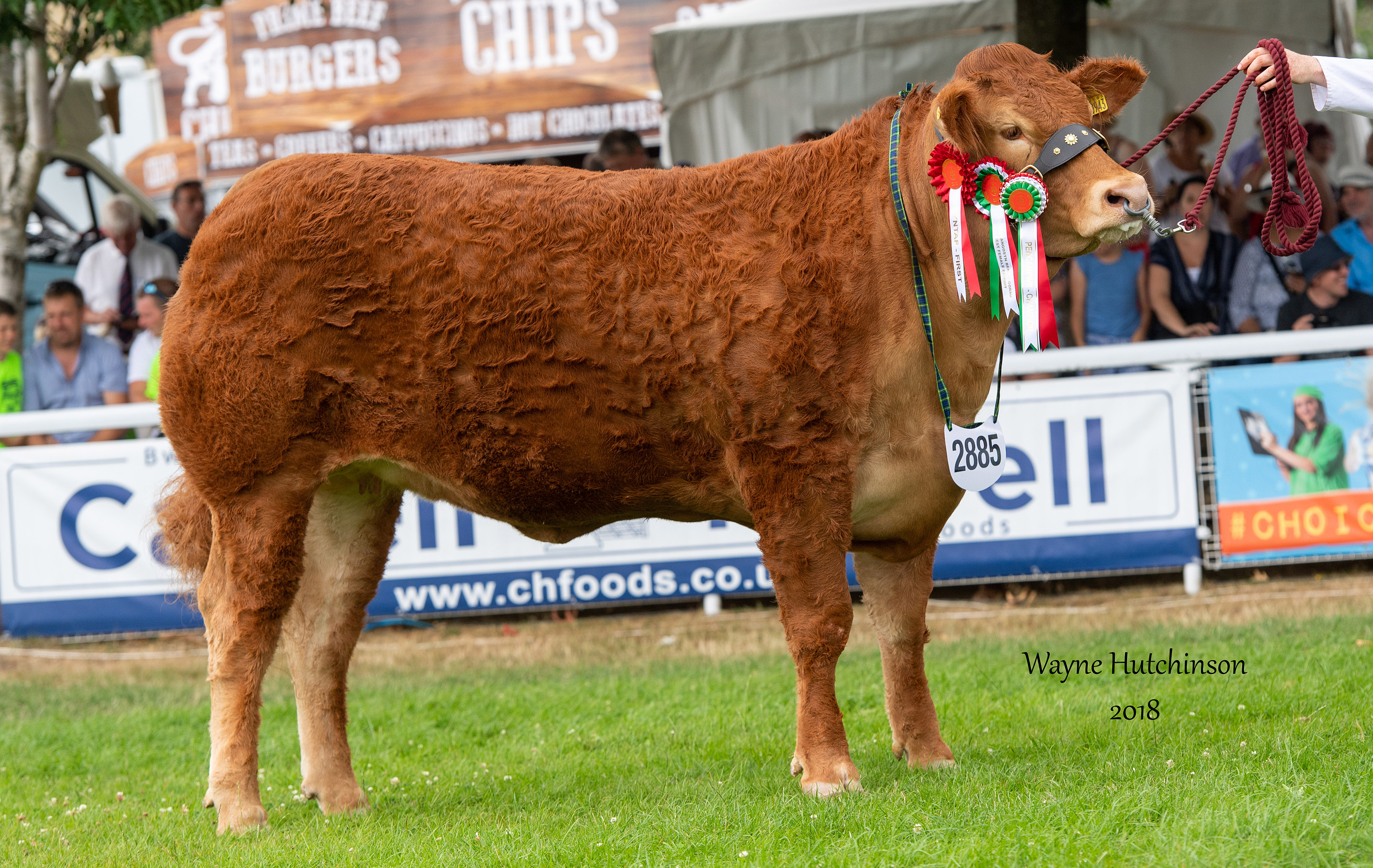 As is usual for late July all roads in Wales led to the showground at Llanelwedd, Builth Wells for this year’s Royal Welsh Show over 23 to 26 July. As the show got underway for the last time before the UK leaves the European Union it welcomed some high profile guests. Cabinet Secretary for Energy, Planning and Rural Affairs Lesley Griffiths undertook over 40 events at the show, hailing the event as a key moment in the national conversation on the future support for farmers in Wales. The last day of the show saw a visit from Prime Minister Theresa May, who set out the UK Governments plans for a post-brexit farming policy.

These visits clearly demonstrate that agriculture maintains its place at the heart of the Royal Welsh show and supporting this livestock entries were very strong. Once again, Limousin cattle presented the largest cohort of any breed on the showground.

The weather on day one of the show delivered spectacular sunshine to match the dazzling display of cattle from the Limousin breeders who had descended on the mid-Wales countryside. It was left to Mr Gary Swindlehurst, Farm Manager at Proctors Farm, Slaidburn, Clitheroe to sweat it out in the cattle ring as he deliberated over his judgments in the Limousin classes.

Having taken the honours as the Best Female exhibit, Mr Swindlehurst tapped out the stylish heifer Grahams Melody from Robert and Jean Graham of Airthrey Kerse Dairy Farm, Bridge of Allan, Stirling as the Champion Limousin. This marks a splendid achievement for the two-year old heifer that came to Builth Wells having been crowned Overall Champion Limousin and Reserve Interbreed Champion at the Great Yorkshire Show earlier in July. Currently in calf to Goldies Jackpot, in addition to the triumph at the Yorkshire Show she also featured in the prizes at this year’s Royal Highland Show and did very well through 2017 as a youngster. An embryo calf by Ampertaine Elgin, Melody is out of the highly successful Millbrook Gingerspice. She is full sister to Grahams Michael, also a winner on the show circuit in 2017, who sold at Carlisle in October 2017 for 20,000gns and to Grahams Malibu who made 25,000gns last December at the Red Ladies Sale.

In commenting on his Champion Mr Swindlehurst said “Melody is a sweet stylish heifer with real presence and she just oozed quality in the ring” he added “she has the ‘look’, correct and well balanced in every way”. Mr Swindlehurst went onto give praise to all the other Limousin exhibitors. Amid what was a stunning display of cattle, he said “Thanks must be given to all the exhibitors for turning their cattle out in such style, there were many tough decisions to make”

Melody’s triumph in Wales rounds off a spectacular summer for the Graham team on the ‘major’ show circuit completing a hat-trick of Breed Championships for the herd. In addition to Melody’s success in Wales, the Graham’s also took the Best Junior Heifer accolade with Grahams Niaomi who was the Breed and Interbreed Champion at the Highland Show earlier in the year. This January 2017 born maiden heifer, by the well-known Claragh Franco and out of Grahams Coffee, will be for sale at Red Ladies Day at Borderway Market, Carlisle in December. Speaking about the latest achievement Robert Graham said “Once again the whole team is absolutely delighted with Melody’s success, I am almost running out of things to say in giving her praise” he added “from a youngster she has always been a stand out animal and as Gary saw today, she has tremendous presence and style in the show ring”.

Later on in the afternoon Melody was tapped out as Reserve in the Individual Interbreed Championship when she came before Judge Christine Williams who together with Paul Tippetts runs the Wilodge Limousin Herd at Shifnal, Shropshire.

Overall Reserve Champion Limousin went to Foxhillfarm Minesagin who had stood second to Melody in the Overall Female Championship. Another heifer coming to Wales on the back of success over the summer; Minesagin picked up an array of honours at the Highland show including Reserve Overall Breed Champion plus she was a member of the Junior Group Interbreed winning Team of Four at the Great Yorkshire Show. Home-bred by Mike and Melanie Alford, Cullompton, Devon, the September 2016 born heifer is by the world-record priced Trueman Jagger and out of Foxhillfarm Justtheone. She went onto claim the Junior Heifer Interbreed Championship on the second day of the show when she came before Judge Gareth James, Tufton.

The Alford family had more success in the Limousin judging with their 14-month old heifer Foxhillfarm Naomi who stood as Reserve Junior Heifer to Grahams Niaomi and took the award for the Best Exhibitor Bred Maiden Heifer born in 2017. Foxhillfarm Naomi, home-bred out of Foxhillfarm Isla, is another young Trueman Jagger daughter to have already dazzled in the show ring, she was tapped out as Reserve Junior Limousin Champion in Harrogate earlier in July.

Top male honours in the Limousin judging went to the Best Junior Bull in the shape of Seisiog Ned from Tecwyn Jones. The May 2017 born young bull, by Elite Forever Brill and out of Goldies Infinity, gave Tecwyn his first ever win at Llanelwedd with a homebred pedigree Limousin from his small two-cow herd at Ty Newydd, Nebo.

Standing as Overall Reserve Male to Tecwyn’s Ned was home-bred Pabo Netherhall from Anglesey breeders Peredur and Llyr Hughes. By Netherhall Jackpot, an embryo calf out of Llyr’s Pabo Icemaden, Netherhall then took his place alongside full brother Pabo Nero to secure the Limousin Pairs title.

The red rosettes for the Best Group of Three went to the Alford team of Foxhillfarm Minesagin, Naomi and April 2017 born Napoleon, a Foxhillfarm Jasper son out of Glenrock Illusion. Napoleon was Reserve Junior Male at Stirling’s 2017 Stars of the Future Calf show and stood as Reserve Junior Bull at the Royal Highland show in May.

From a strong base the Limousin breed was again well to the fore in the other Interbreed competitions culminating with taking the red rosettes in the prestigious Team of Five Championship. With Foxhillfarm Jasper from A W Jenkinson Farms at the helm, two heifers from the Foxhillfarm cohort, Minesagin and Madonna teamed up with Grahams Melody and the August 2016 born Dinmore Madonna from Paul Dawes to make an impressive line-up. Judged by Mr R J Irvine of White Cross, Armagh, Northern Ireland the imposing Limousin team came into the ring looking every bit the favourites. Limousins have been victorious in this class at the Royal Welsh every year bar one since 2014. In what can be described as a gladiatorial atmosphere under the intense sunshine, the large crowds gathered to see the Judge tap the Limousin team out as champions and the very popular Welsh Black team into Reserve.

Limousins triumphed in both Exhibitor Interbreed Team Championships with line-ups from the Foxhillfarm and Calogale stables. Again judged by Mr Irvine from Northern Ireland the winning Exhibitor Bred pair team of Foxhillfarm Madonna and Minesagin made a superbly balanced duo.

More great news followed for Gareth and Catrin, at the Club social gathering in the evening they were presented with the LBV Thomas award for the Best Exhibitor Bred Female, owned by a breeder residing in Wales, for Calogale Nightingale. The January 2017 born heifer, which had come second in her class in the Limousin judging to Grahams Niaomi, is yet another Trueman Jagger daughter, this time out of Trueman Florence.

On the final day of the show, Thursday 26 July, Limousins continued to hit the high note, this time in the shape of an impressive duo of Madonnas. Dinmore Madonna and Foxhillfarm Madonna were triumphant in the Females of the Future Pairs Championship. Dinmore Madonna, a Jagger daughter out of the Sympa daughter Ampertaine Estelle came to The Royal Welsh having taken the Limousin Championship and Beef Interbreed Championship at the recent Royal Three Counties Show.

In other successes at the show, the Edwards family from Landovery, Carmarthenshire took first place in the Agri Lloyd Elite Junior Bull Championship with their April 2017 born home bred bull Dyfri Nolan. To be eligible to compete bulls must have a Signet Beef Value or corresponding Breedplan Index greater than the breed average. Home bred, he is by Fenomen out of Dyfri Golud. This is the second year on the trot that Fenomen has sired this Championship winner. Fenemon was imported from France, where his figures placed him in the upper echelons of the breed, after winning at the 2014 National Show in Limoges. He has since worked as the principal stock bull in the joint owner’s herds at Scorboro and Dyfri. He is known as an exceptionally correct and sound bull, with great muscularity and length.

Standing Reserve was March 2017 born Calogale Ninja who is the same way bred as his team of three companion Calogale Nightingale, by Trueman Jagger and out of Trueman Florence.

In the highly competitive Commercial Championship, as would be expected, Limousin genetics dominated throughout the entire judging session, which was overseen by Mr Colin Soutter, Ashby-de-la-Zouch. The majority of the cattle he tapped into winning spot in the classes featured Limousin as either sire or dam.

Champion Steer came from Miss Charlotte Alford, Cullompton, Devon in the shape of No Likey, a 13-month old Limousin sired exhibit bred by D E and G Davies. The Champion Heifer red rosette and eventual Overall Supreme Championship went to Dream Girl, a July 2016 born heifer from the Roberts family of Gaerwen. Bred by Dafydd Lewis, Cwrt y Cadno, she was bought by the Roberts family at the Ruthin Show Potentials Sale last year as is out of a Limousin cross cow, sired by a British Blue.

In the Baby Beef Championship it was a clean sweep for Limousins. Mr Soutter first tapped out Rambo, a November 2017 born Limousin sired steer, home bred by Tecwyn Jones, as his Champion. An 11-month old Limousin heifer, Scarlet from Morgan and Jones, Llandovery, Carmarthenshire took the Reserve spot.

It was fantastic to see a number of Limousin young handlers competing for the Interbreed Young Handler Championship. The breeders of the future, such competitions give them the opportunity to showcase their stockmanship to the fullest. Archie Hill from Cheddar, Somerset and Elliw Roberts from Anglesey were victorious in front of Judge Mrs Carole Rettie from Alloa, Clackmannanshire.