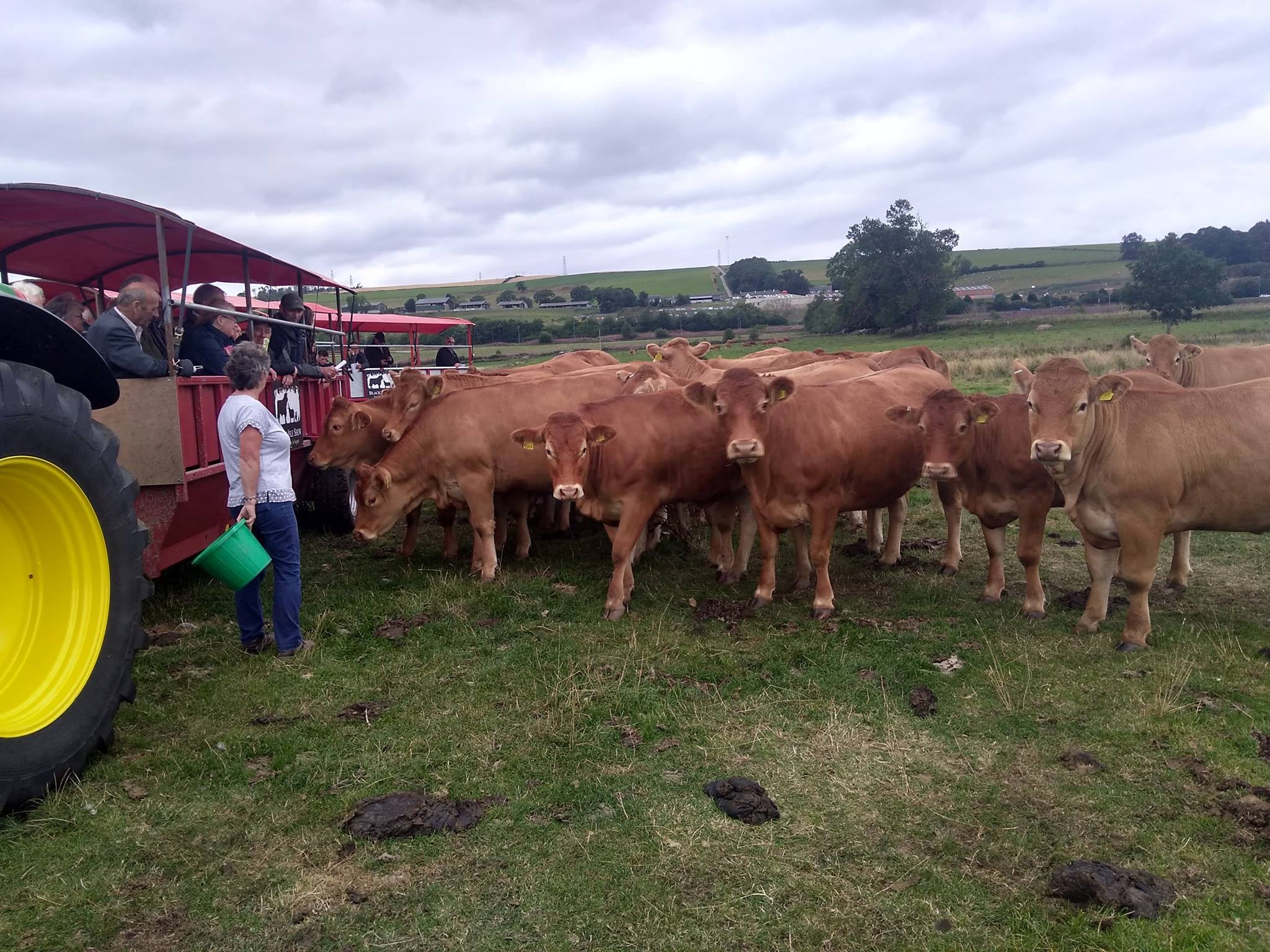 Despite the summer having being characterised by high temperatures and lack of rainfall the downpours which hit the north of Scotland during the Scottish Limousin Club’s open day at the Alagils Herd on Sunday 12th August didn’t spoil the enjoyment.

Alasdair and Gill Macnab welcomed around 150 people to take a look at their Alagils Limousin herd on their farm, Kildun, just outside Dingwall. The herd, which was formed in 2003, is based on elite genetics, with the foundation being embryos from leading show cow Broadmeadows Jiji, a daughter of the legendary Broadmeadows Cannon out of Broadmeadows Didi. Alasdair and Gill’s aim has always been to breed commercially relevant cattle based on a solid female foundation of deep pedigreed, correct, proven female lines. This policy has created a female base in the herd which is correct and carries exceptional performance and breed character throughout.

The high performance genetics working throughout the herd were highlighted in a talk through the day by Alison Glasgow, BLCS Technical Manager. The policy of genetic improvement in the herd was outlined, and the high proportion of animals in the herd with key economic traits such as Age to Slaughter and Retail Value in the Top 10% and Top 1% of the breed.

Early show and sale successes for the herd included Alagils Umax, a Nestor son out of Jiji, which was champion at Perth bull sales in 2004 and sold for 9000gns having also been champion at Black Isle in the same year. Then in 2006 Alagils Ainsi, another Jiji daughter, was placed first in a class of 16 heifers at the Royal Highland, as well as winning at Nairn, Black Isle and Grantown shows. Ainsi was also shown in 2010, standing third at the Highland, as well as interbreed champion at Nairn, Black Isle and Grantown. More recent success came in the shape of Alagils Jambon who topped the May 2016 Limousin Society sale at Carlisle at 28,000gns when selling to Eric and Elaine Norman, Little Orton. Sired by the Cogent AI sire Netherhall Gallant, himself a son of the 72,000gns Haltcliffe DJ, Jambon is out of Alagils Gillie, herself a daughter of the herd’s foundation cow Alagils Ainsi. 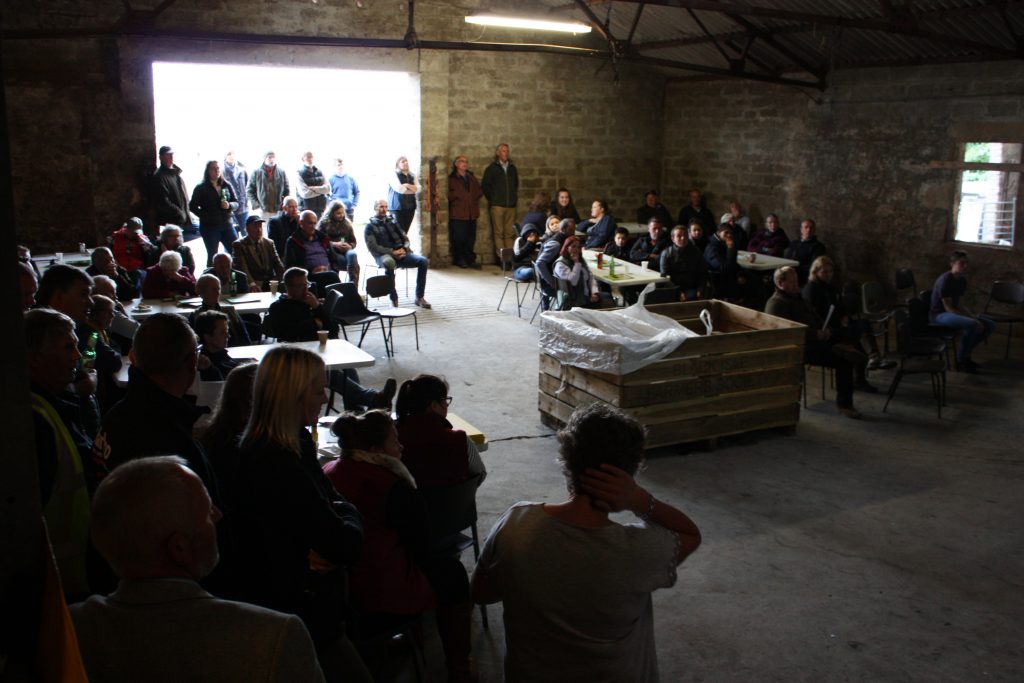 Guests took part in stock judging with input from the Young Limousin Breeders Club and listened to further technical talks from IanAnderson, nutrionist with Harbro and John Cowan, Manager of the Scottish Government Bull Stud. Despite the weather deteriorating later in the day guests enthusiastically boarded the trailer for a herd tour.   A hearty barbeque with Limousin sourced sausages and burgers from local butchers John M Munro Ltd rounded the day off. Alasdair and Gill extend their thanks to all who helped make the day a success. 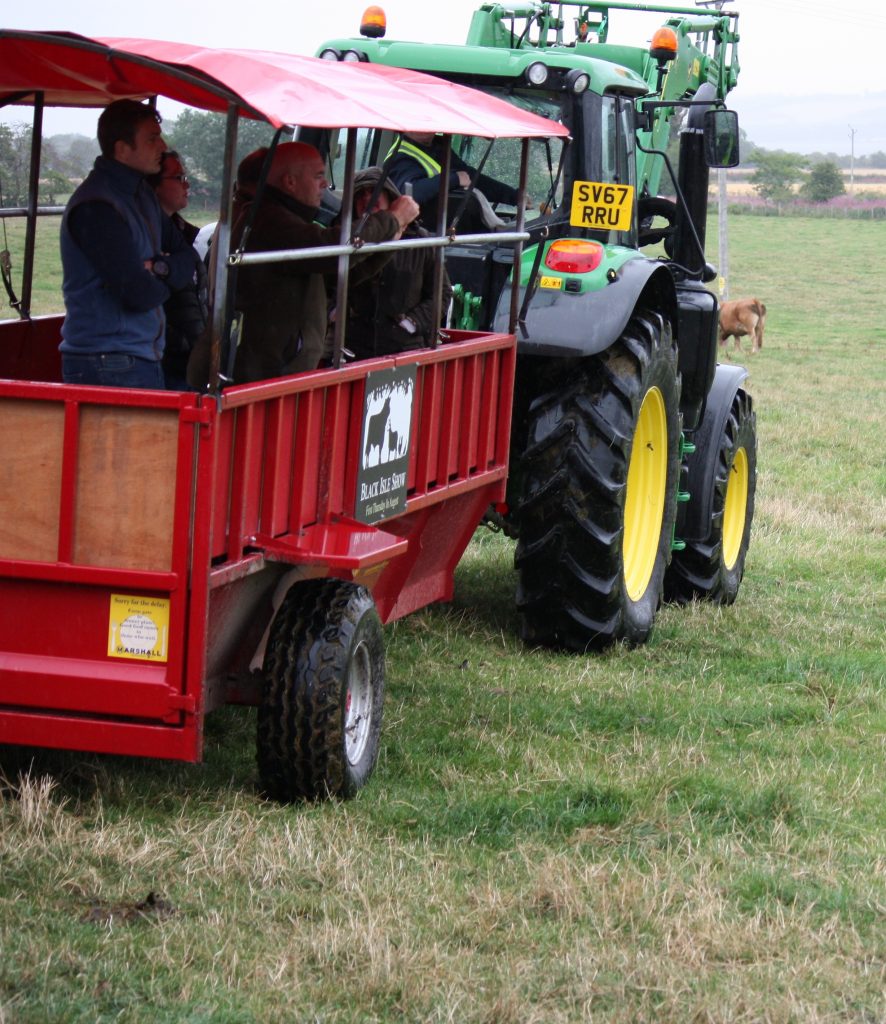 It was then the turn of the Priestly family who run the Brontemoor Herd at Cracrop Farm, Brampton, Cumbria to host the North West Limousin Breeders Club open day on Sunday 19th August. Another large turnout of guests enjoyed taking part in stockjudging classes and taking a look around the farm and cattle, in the usual style on the back of a trailer.

One of the foremost names in the breed, the Brontemoor Herd was established over 30 years ago across the Pennines in Yorkshire with the first Limousin bull purchased from Jim Bloom of the Scorboro herd. Located in Cumbria since 2011 Cracrop Farm is now farmed by three generations of the Priestley Family, grandfather Michael, who is a former President of the BLCS; son and daughter-in-law Steven & Ruth; and grandchildren Sarah & Richard. The herd consisting of 90 pedigree and 20 commercial Limousin cows, has enjoyed much success, most recently at the May BLCS sale in Carlisle where a homebred bull Brontemoor Laidlaw sold for 11,000gns. 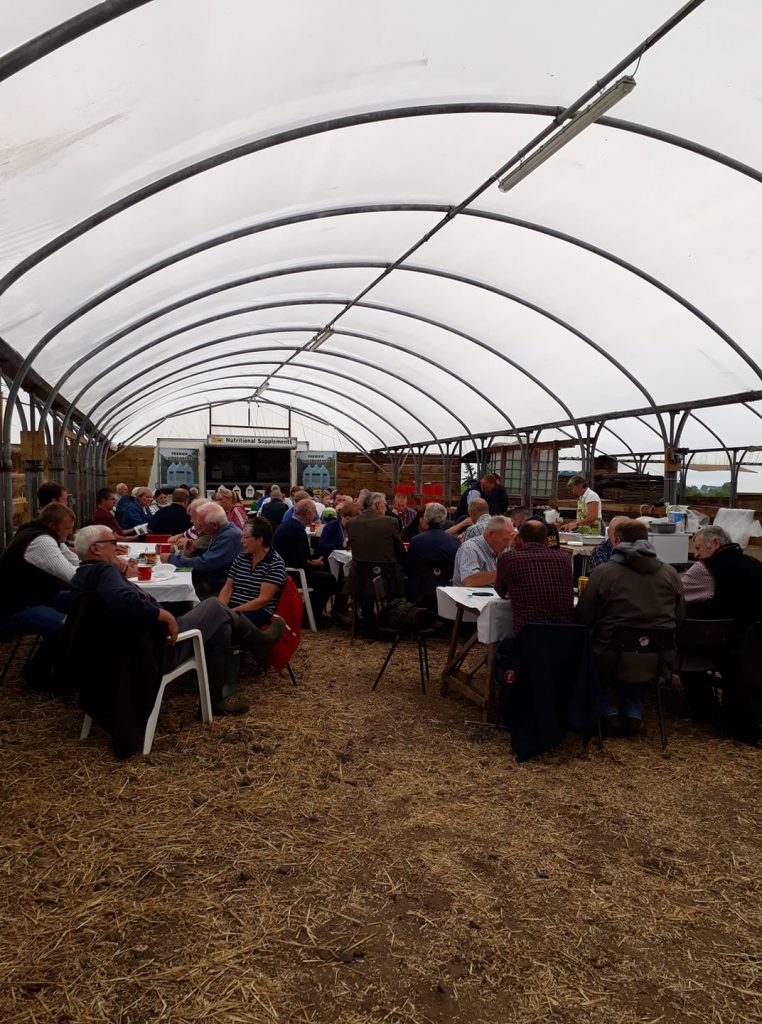 Sires of the current calf crop include Powerhouse Elite, Mereside Lorenzo, Lodge Hamlet, the homebred Brontemoor Max and Loosebeare Handsome, bought in Carlisle in 2014 for 10,000 guineas. The enviable uniformity throughout the cow herd stood out on the day, with the quality of the calves and first-calved heifers in particular appealing to all.

A heartfelt thank you is extended to everyone who made these open days a success. Events like these are not only a great excuse for breeders to get together and enjoy social activities but also a fantastic showcase for the breed to a wider audience and a valuable opportunity to learn from each other.