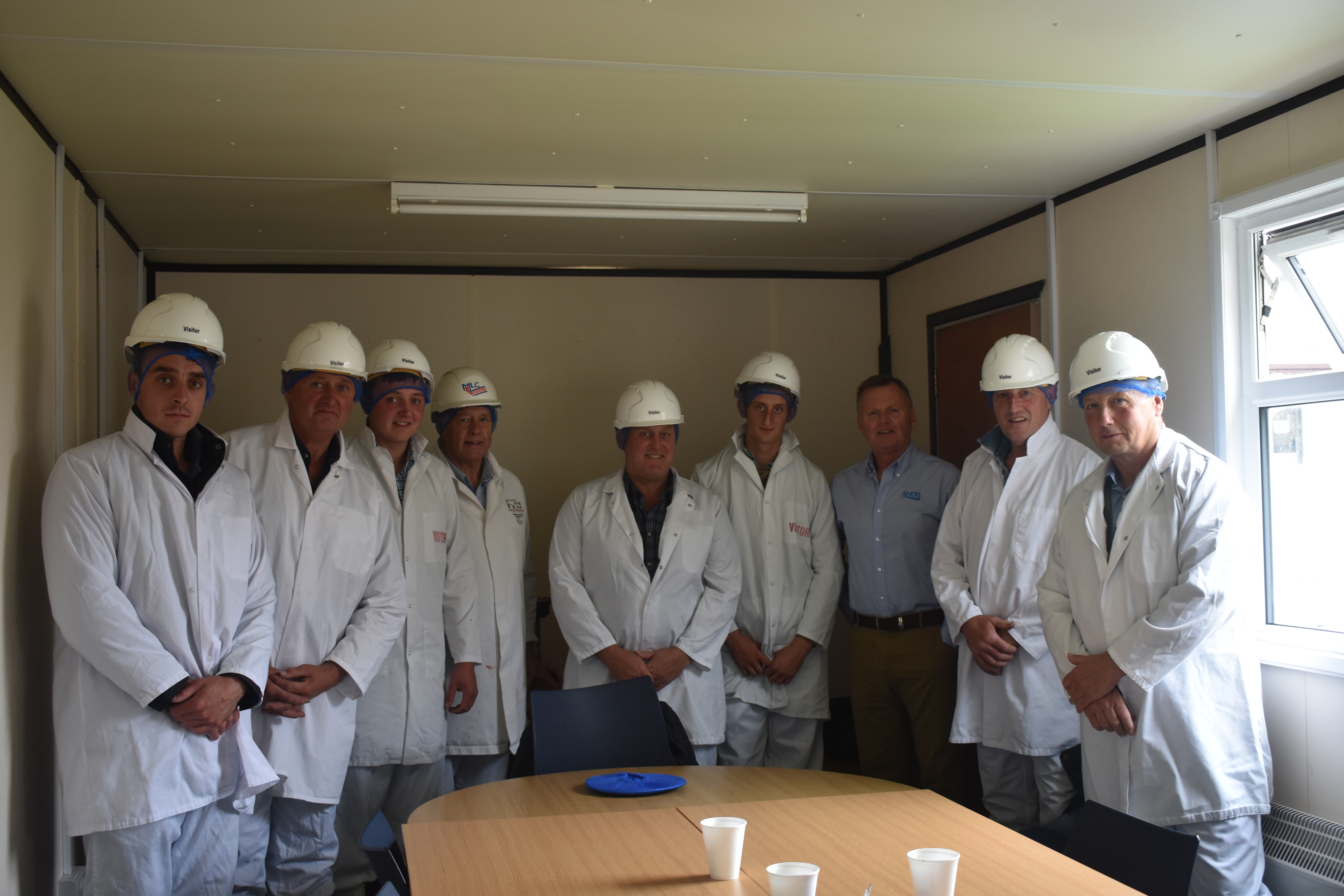 On the 15 August the British Limousin Cattle Society held its first ‘farm to fork’ demonstration courtesy of AHDB and Dunbia Sawley. Led by Steve Powdrill, AHDB’s Technical Manager it was a practical and educational event which gave the commercial producers attending the opportunity to handle live animals and make assessment of fat cover, conformation using the EUROP grid and carcase weight, before inspecting the same animals on the hook in the chillers after having ‘walked’ the slaughter line. The group also had the chance to view the cutting room where product is packed and processed for a range of retailers. 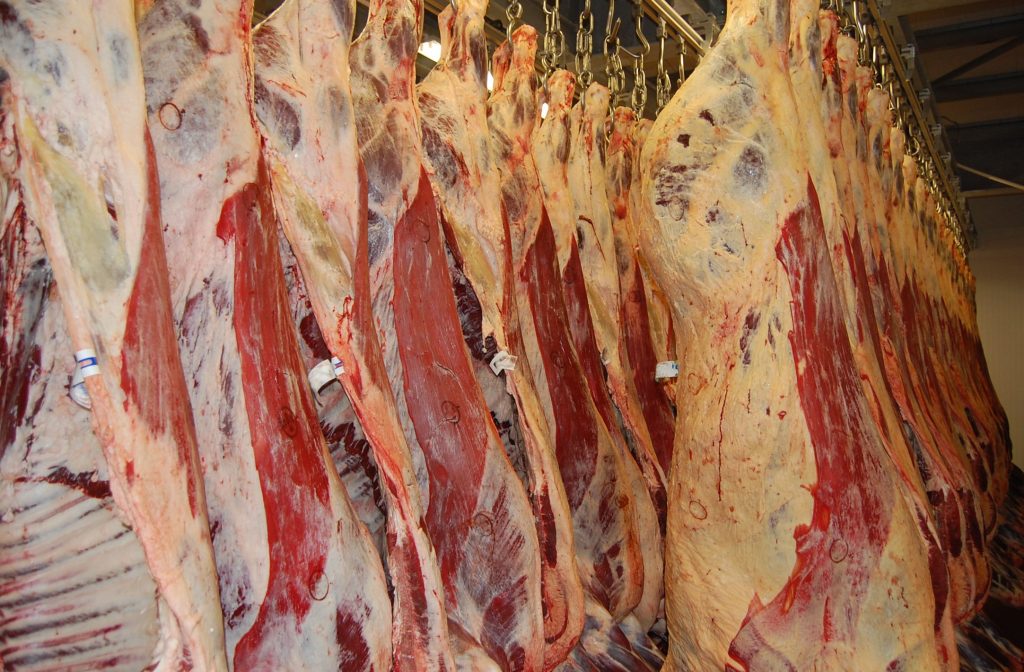 On the day there was plenty of opportunity to discuss various market requirements and the factors affecting killing out percentages and dressing specifications. The pros and cons of the EUROP grid classification system was a hot topic and in the classroom ahead of entering the factory the group learnt that a carcase classifying R4L now suits approximately 85% of the market. With the stark reality that well over half of the carcase is now finding its way into the mincer, including more round cuts, one of the key messages to come out of the day was that producers need to keep their focus on the high value cuts, in particular the width, depth and length of loin. 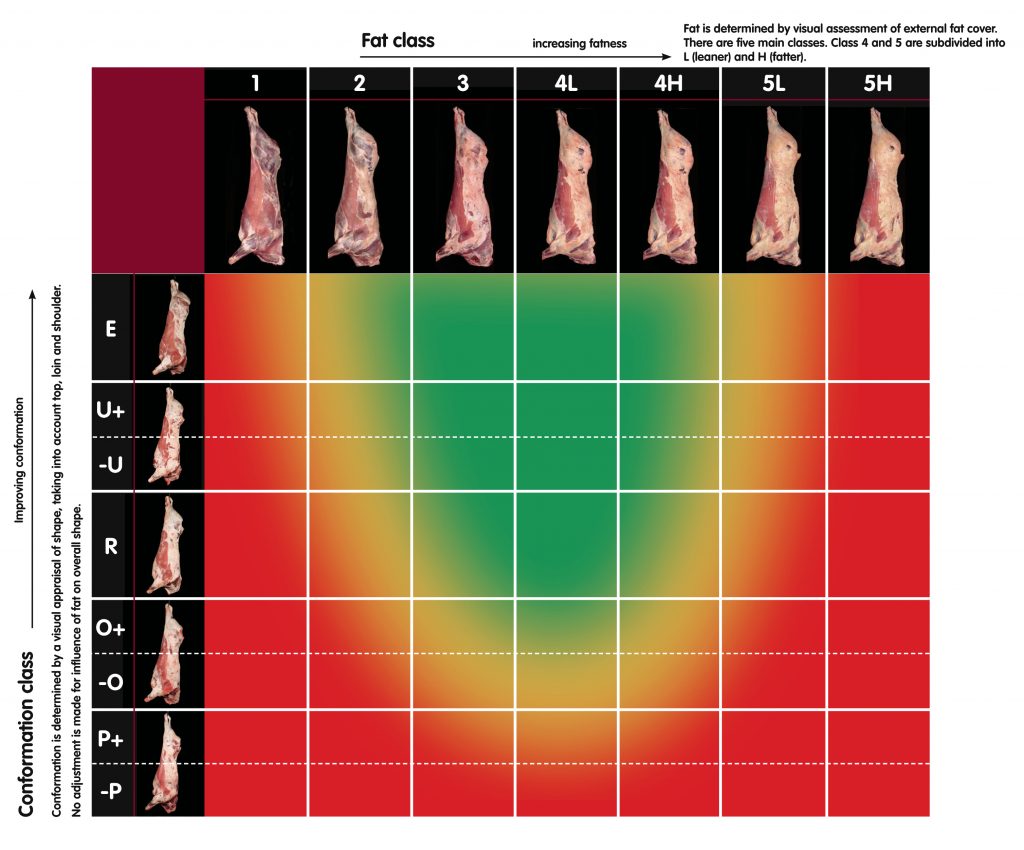 Currently, Limousin is the only breed in the UK offering producers the ability to make robust predictions of generic merit for a range of carcase traits which includes one based around the weight of the six primal cuts, fillet, striploin, rump, silverside, topside and knuckle. Using these ground breaking Genomic Breeding Values, producers of pedigree and commercially bred Limousin cattle now have the tools at their disposal to identify animals with the genetics to not only perform well for the traditionally-measured traits, such as growth, but that will also go onto perform well through to slaughter and will help increase the proportion of all higher-value cuts simultaneously.

Events of this kind are a fantastic opportunity to practically demonstrate just how important the BLCS Breed Improvement Plan, and its commitment to drive market ready genetics forward really is; particularly given the uncertain time for the sector. The commercial end of the business is crucial for the success of the breed and with the adoption of new carcase classification technologies in the future very likely, the cattle with the genetics to convert food efficiently reach slaughter weights earliest and crucially, deliver more valuable carcases, will be in the greatest demand, just as they already are.

Of the day BLCS Chief Executive Iain Kerr said “Engagement with commercial producers on this level is a valuable activity for the Society given that they underpin the success of the Society’s pedigree members” he added “Our 10 year breed improvement plan is all about ensuring that users of Limousin cattle capture the optimum value from the genetics they are using in ways that haven’t been possible before, the evidence provided by events such as this confirm just how important this is now and in the future”

The producers also learnt about the substantial cost to the supply chain from delivering over-fat cattle onto the market. Not only is there an extra cost to the farmer he gets penalised for it on the payment grid as well, plus, the cost to the abattoir, which is trimming the fat off, and in some cases mincing valuable cuts, is significant. The effect of liver fluke was highlighted; again an issue to affect both sides of the supply chain. It has an impact on the daily live weight gain of the animal but also renders many livers unfit for human consumption, which is lost revenue to the industry.

Of the event Steve Powdrill said “AHDB has been running these popular ‘farm to fork’ events for more than 10 years. They are a valuable education tool for all sections of the supply chain, for primary producers, they help them understand the importance of sending livestock to slaughter at the right time and the implications for not doing so”. He added “It is part of the wider Farm Excellence Platform, which is based on farmer to farmer learning and is a core component of AHDB’s new approach to knowledge exchange and research”

The Society received very positive feedback from the participants on the day and extends a huge thank you to the staff at AHDB and Dunbia for accommodating the group brilliantly.