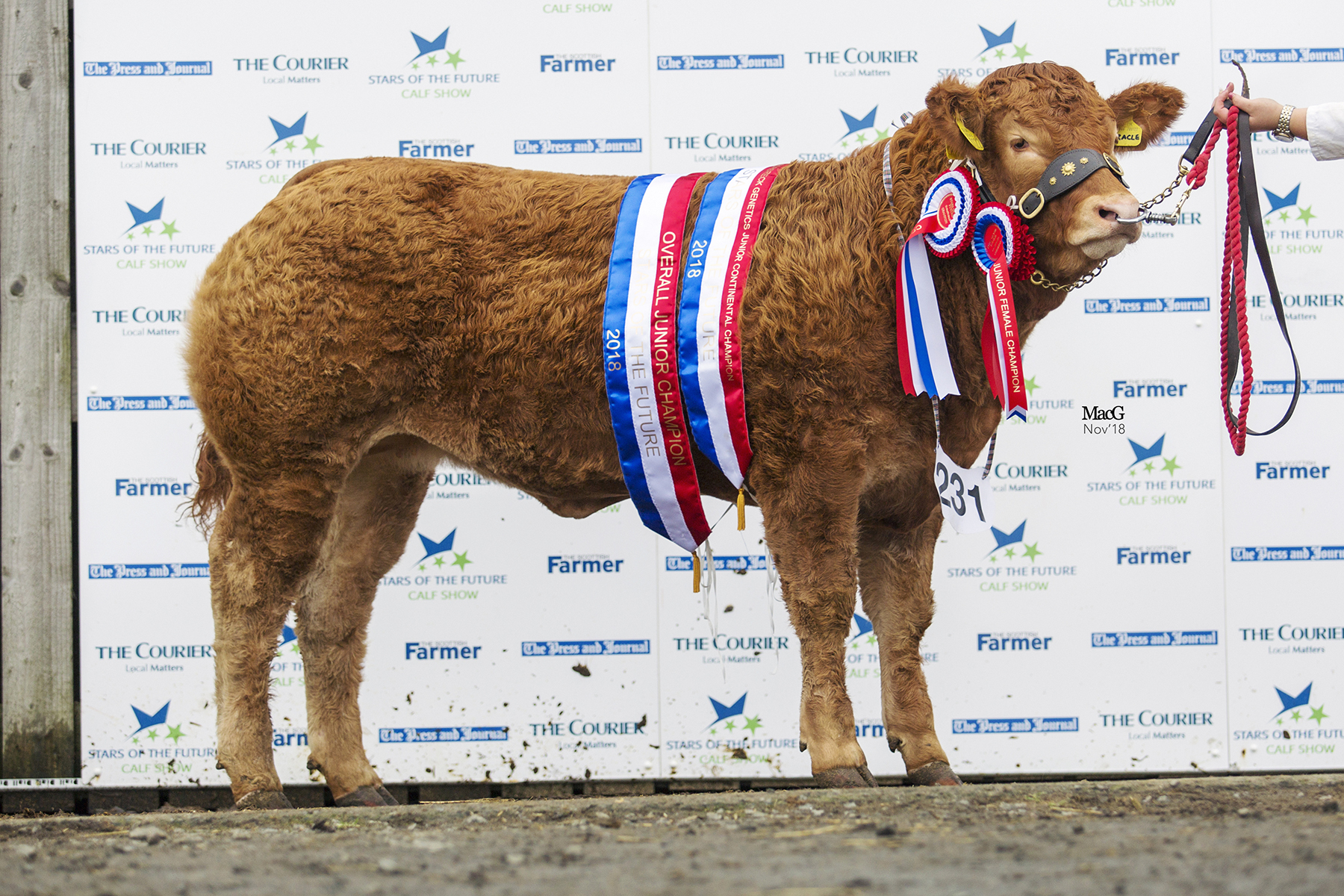 Now in its ninth year, the Stars of the Future Calf Show, held on Saturday 10th November 2018 at United Auctions, Stirling, saw a fantastic entry of calves across all breeds. In front of a large crowd of spectators, once again, Limousin bred cattle featured in the Interbreed accolades. Judge, well known farmer and cattle breeder from the County of Dumfries, Mr Alasdair Houston placed a Limousin as the Junior Interbreed Champion and the Reserve Senior Interbreed Champion.

From a strong line up of cattle Mr Houston placed Ritchies Oracle from Aileen Ritchie, Whitecairns, Aberdeenshire as the Junior Interbreed Champion. The eight-month old heifer came to Stirling with some quality breeding behind her, she is by the Rocky son Rathconville Eugene and out of the Wilodge Vantastic daughter Dinmore Elle. Stock bull at the Ronick herd, Eugene has proven himself to be exceptional, producing progeny selling well into five figures, while Dinmore Elle, bred by Paul Dawes at Dinmore Manor, Hereford, herself had a successful show career.

In the senior section, Mr Houston tapped out Westpit Nashville from Messrs A and J Gammie, Drumforber, Laurencekirk, Aberdeenshire as the Senior Interbreed Reserve Champion. The 14-month old young bull is sired by the Mas Du Clo son Dinmore Immense and is out of another Wilodge Vantastic daughter, this time in the shape of Brockhurst Holly.

In the Limousin judging under the eye of Gareth Small, who had made the long trip from Co Down, Northern Ireland, Ritchies Oracle had taken the Junior Female Championship and then the Overall Junior Championship. Standing Reserve to her in both contests was Springsett Orchid from Dougie McBeath and Sarah-Jane Jessop, Bannockburn, Stirling. Home-bred, 11-month old Orchid is by the Sympa son Haltcliffe Ben and out of the Objat daughter Wilodge Flawless.

All the way from Devon, Mike and Melanie Alford, Foxhill Farm, Cullompton, took the Junior Male Championship with Foxhillfarm Obama. This January 2018 born young bull, bred from the pairing of Foxhillfarm Jasper and Glenrock Illusion, came to Stirling fresh from success in his class at Agrifest South West, Exeter just a few days earlier. His parentage needs little introduction, Jasper, the son of the reputable Bankdale Alice, dominated the 2015 show circuit, including being crowned Supreme Champion at the Royal Highland Show, Male and Reserve Junior Champion at the Great Yorkshire Show and the same at the Royal Welsh Show. The 125,000gns Glenrock Illusion, bred by the Illingworth family in Carlisle, is by Goldies Comet out of one of the Glenrock herds most successful breeding females, Glenrock Spangle.

Standing as Reserve Junior Male was Lodge Omega from the Callion family, Bolfornought Farm, Stirling. This May 2018 bull, out of Lodge Jewel, is sired by the Rossignol son Lodge Hydro, who was himself Junior Interbreed Champion at the Stars of the Future Calf Show back in 2012.

Standing reserve to Nashville in the Limousin Senior Championship judging was the Senior Female Champion Grahams Nicki. This September 2017 born heifer from R and J Graham, Airthrey Kerse Dairy Farm, Bridge of Allan, Stirling is by the well-known Ampertaine Gigolo out of Grahams Lulu, who is bred from a Claragh Franco and Grahams Coffee mating.