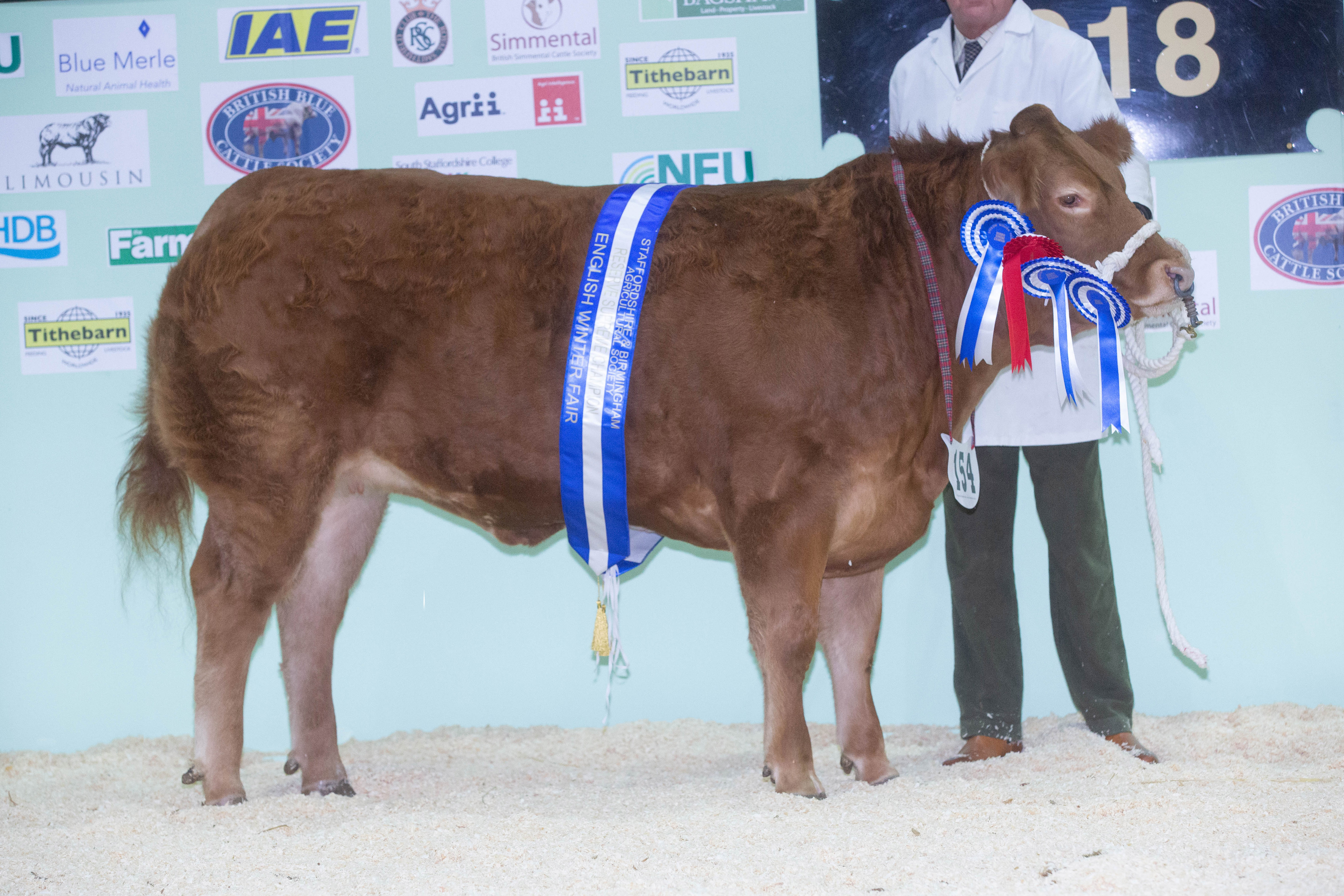 Saturday 17th and Sunday 18th November saw the Staffordshire County Showground host the 2018 English Winter Fair. From a quality show of cattle Limousin sired exhibits once again featured heavily on the results board.

In front of a sizeable crowd the April 2017 born Limousin sired red heifer Fancy That from Phil and Sharon Sellars, Lincolnshire took the Reserve Supreme Overall Championship when she came before the joint Judges for the day, Mr J Ford, Kelso and Mr R Rattray, Aberystwyth. Having been purchased from Frank Page, Elkington, after being spotted at the Ashby Show, the stylish heifer is no stranger to success this year, she was Champion at the Southwell Show in September and Reserve Supreme Champion at Countryside Live in October. Earlier in the show, she had been tapped out as Reserve in the Crossbred Heifer Championship.

Making it a first for Limousin in the Pedigree Section, judged by Mr Ford, this time on his own, was the Lodge Hamlet son Nico from S and R Stamp, Mark Highbridge, Somerset. Bred by Mervyn Yates, Worcester, the May 2017 born steer is out of the Lynderg Emperor daughter Whitwood Jlo. Nico had taken the Champion Pure-Bred Limousin accolade earlier in the day when he stood ahead of the May 2017 born heifer Nuttela from T A and L C Lyon and Sons, Thurlby, Lincolnshire.  Nutella, a Trueman Idol daughter out of Garnedd Garwen was bred by Ken Jones who, along with his son Hefin runs the Garnedd Limousin herd near Betws-y-Coed.

Judged by Mr Rattray, the Homebred and Fed Championship was a clean sweep for Limousin heifers. Taking the red rosette was Fitbit from Mr E Edwards, Corwen. Home-bred by Mr Edwards the May 2017 born heifer is by the Ronick Hawk son Brenmick Gethin. Picking up the Reserve spot was Alexa from Frank Page. This near two-year old heifer is sired by the Page Brothers stock bull Heathmount Frenchconnection, a Wilodge Vantastic son bred by the McKinney Brothers of Maghera, Co Derry.

The Steer Championship was won by Freddie from Phil Price and Julie Rogers who farm Lower Sgynlas, a Powys County Council smallholding at Glasbury, Hereford. The October 2017 born Champion was bred by Phil’s father Bernard, who farm close to Phil and Julie at Hay-on-Wye. Taking the Reserve Steer Championship was another Limousin sired exibit, this time in the shape of No Likey from Mike and Melanie Alford, Cullompton, Devon. This June 2017 born steer was bred by D E and G Davies out of a Limousin cross cow. No Likey was Champion Steer in the Commercial contest at the Royal Welsh Show back in the summer.

The Baby Beef classes were judged by Mr Tecwyn Jones, Llanwrst. Taking the Steer Championship was Red Rob from John and Denise Davies, Rugby, Warwickshire.  The six-month-old home-bred calf is by Huntershall Filleppe, a Rossignol son who was bred by Stephen Nixon of Wigton, Cumbria.

In the Pedigree Limousin Calf contest taking the Championship position from Judge Mr David Thomlinson, was Arradfoot Ocala from Thor Atkinson, Ulverson, Cumbria. This April 2018 born young heifer, bred by Thor stood first in the Junior heifer class.  She is by Kilcor Iceman out of Glenrock Horizon. Standing Reserve Champion was the Junior heifer runner up in the shape of High Ground Olivia from fellow Cumbrian breeders N Chapplehow and M Morley. Also home-bred, the January 2018 born heifer is by Netherhall Jackpot out of High Grounds Layla.

Rounding off an excellent two days for the breed and backing up its position as the complete beef breed, in the Royal Smithfield Club National Festival of Meat Competition a Limousin carcase took the Reserve Champion spot in the Cattle Carcase Competition.  Judged by Mr A Brown, the blue riband carcase came from the Lyon family. The carcase came from a 17-month old bullock by Ironstone Hornblower out of a Limousin cross cow bred by the Lyon family. 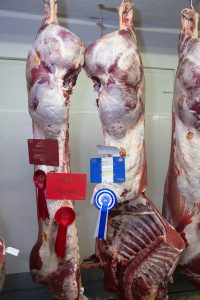