Home Scotland AMY LINDSAY REPORTS ON HER BLCS FUNDED TRIP TO CANADA – “AN... 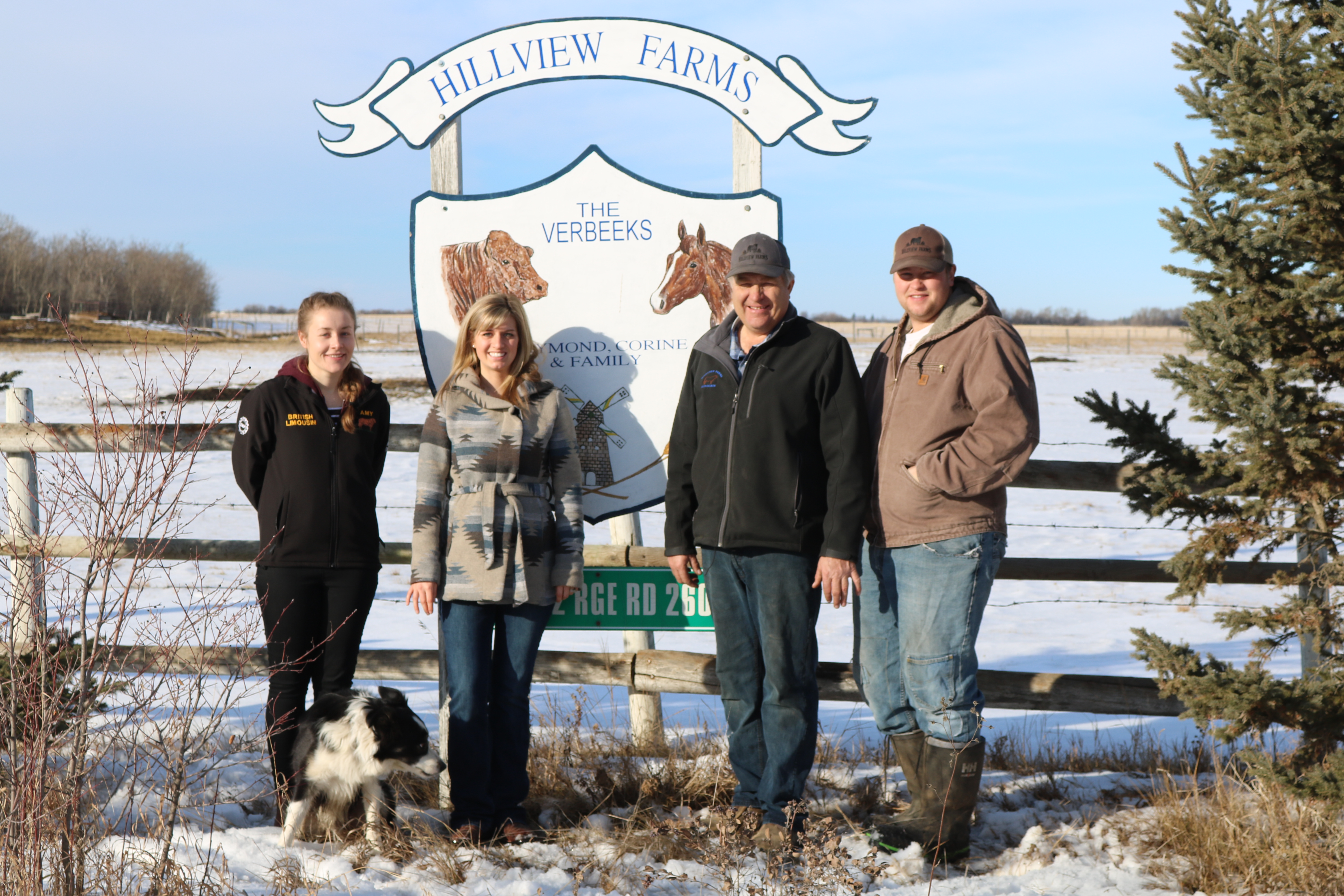 In recent years, the Young Limousin Breeder’s Club (YLBC) club allocates points to active members for attendance and participation in YLBC events throughout the year. The member with the most points receives a travel scholarship fund. Thanks to her involvement with the YLBC club, Amy was given the incredible chance to travel to Canada for two weeks. In Amy’s own words, she gives a super account of the trip.

My itinerary involved staying with a host family and attending Farmfair International Show at Edmonton, one of Canada’s top shows. Throughout my trip, I had the privilege of staying with Tessa and Colin Verbeek and their family. Tessa Verbeek is the General Manager of the Canadian Limousin Association and her husband Colin, farms full time with his parents Raymond and Corine on the family’s fourth generation mixed grain and Limousin operation, Hillview Farm, near Morinville, Alta. Their Hillview Limousin herd consists of 200 pure bred Limousin cows, making them the 4th largest registered Limousin herd in Canada, they have had 42 years in the Limousin business. The Verbeek family are strong believers in the Limousin breed and the value it has for the commercial producer. They are constantly striving to raise docile, sound, easy calving and high performing breeding stock that work for them and their customers under the current demands of the beef industry.

My first few days were spent helping Colin on the farm with the feeding of the stock, general farm work and helping to get the cattle prepared for the Show. What was evident straightaway was that all cows are out wintered, only brought in during the first 24 hours of calving in January. Colin explained the importance of frequent checks during calving time as failure to bring a calving cow into the shed in time can result in the calves freezing, although, as soon as the calves are licked dry and sucking, they are put back outside. 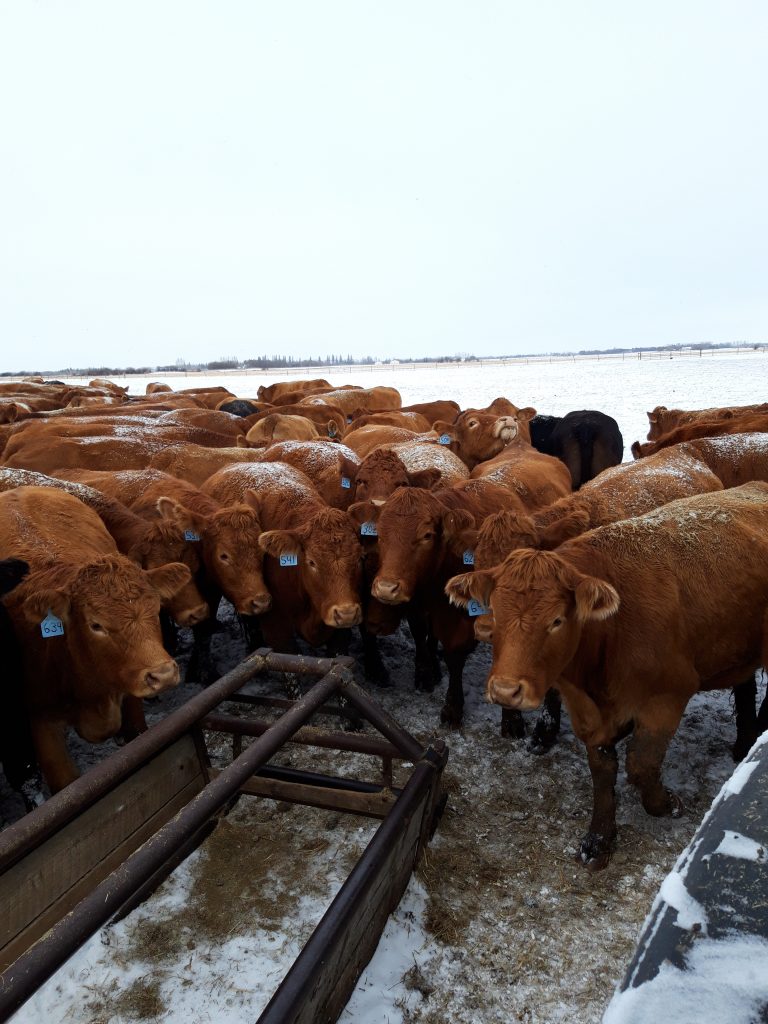 They are being bred to be strong and tough. Having spent my first few days out on the farm, I soon realised how the sub-zero temperatures create a lot of extra work. While water pipes are put in the ground six foot down with the -20 temperature which we experienced, troughs were well and truly solid, and we spent considerable time putting in water heaters to save ourselves work when we would be at the show later in the week. 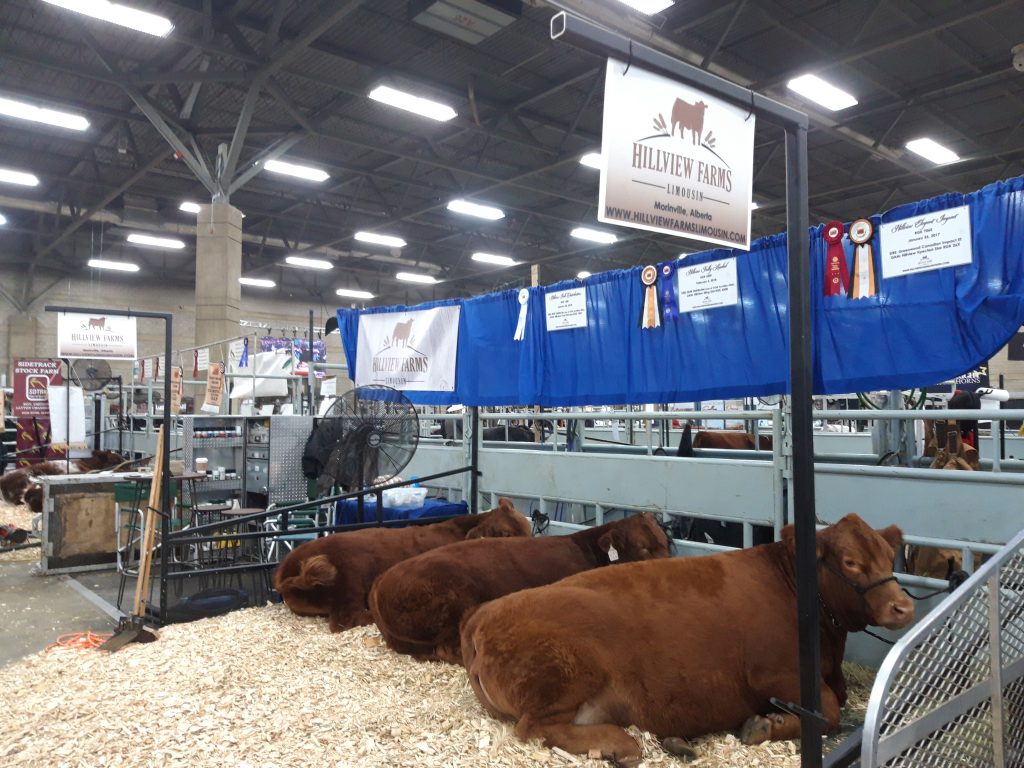 In preparation for the show, we frequently washed the cattle, luckily for me it was always within their heated barn. The primary use of the barn is for the family’s on farm bull sale, which takes place annually on the first Saturday in March. During the sale, all bulls are penned outside and pre-recorded videos are played during the indoor auction, they use live-streaming webcams online to enable international buyers to view and purchase bulls. The Verbeek family sell 40 bulls annually and usually sell steers to local feed lots and cast cows at their local auction market. Nearer the end of my trip, I had the opportunity to visit the weekly cattle sale at Vold Jones & Vold Auction, interestingly cattle were all penned outdoors by cowboys and their horses.

The Verbeek family had two young bulls and one yearling heifer heading to Farmfair, and, as in the UK, we headed into the event a few days ahead of the start of the show to set up. After allowing the cattle a few hours to settle in, I was surprised to find out we would have to remove them from the main hall. As it turned out, each night, we led the cattle to ‘tie out’, a tradition which involves all cattle being led out the main hall at 8pm and led all the way along an old horse racing track to then be tied up on an outside stall at the end of the track, taking approximately 20 minutes to walk your cattle there. This tradition was implemented to predominantly give the cattle exercise, encourage hair growth and try to limit illness by being out in the cold overnight, then we would bring them back in early morning, this soon became my favourite part of each day as it was a spectacular sight. 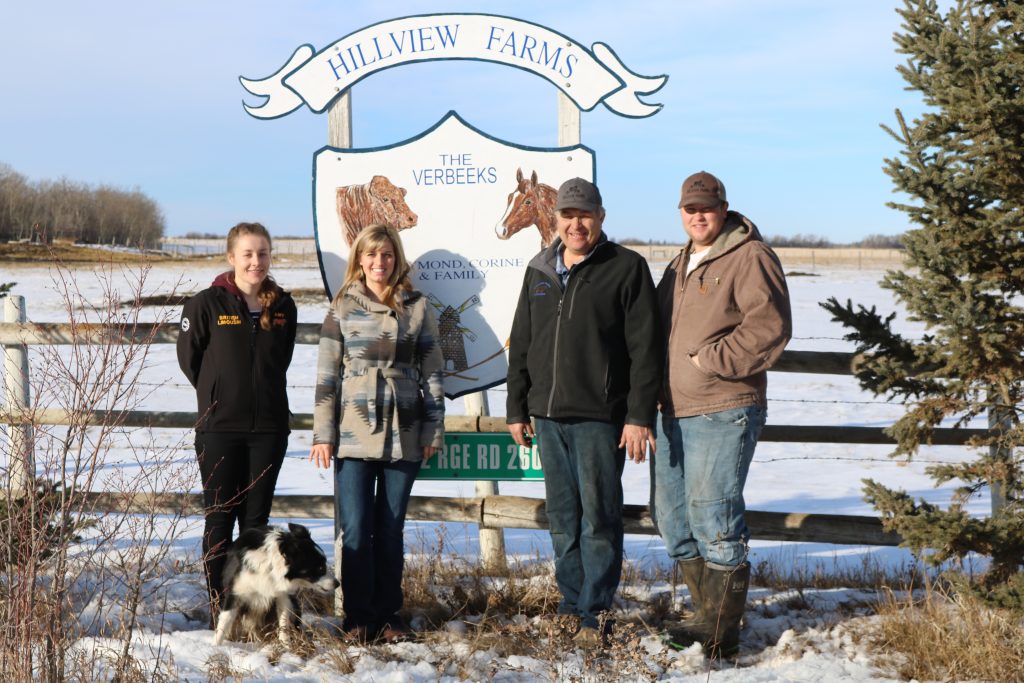 The first day of the show was Wednesday the 7th November, where I enjoyed meeting and greeting other breeders, viewing all the cattle exhibited, and watching the judging. I found it fascinating to learn about the cattle industry in Canada. I learned that only a small portion of Limousin are full blood, with the majority being pure bred which means they have 90% Limousin genetics and the other 10% of their gene pool is something else. All breeds look alike and as a result it was very difficult to identify each breed of animal. Each breed, apart from the Charolais, have to follow a cattle identification program which involves them having a specific coloured tag to let people know what breed they are, for example, Limousin have a pink tag, Simmentals have a blue tag and Angus green.

Show day was on Thursday and cattle were all dressed by a team of fitters, they each took a corner of the clipping shoot, clipping the main body hair to perfection without the need to add products. Fitters mainly focused on the legs as this is the most difficult place to grow hair to add bone structure – quite different to how we may dress cattle at home. Colin vey kindly allowed me to show one of their young bulls, Hillview Full Distribution, which was a great experience. It was very similar to showing back home however it required a different form of ring craft. When standing an animal up close the convention is to pull the left back leg forward to show off either their udder or testicle size. The bulls and heifer both performed well in the show ring and we were very pleased with the results, first for the heifer, which went onto become Grand Champion yearling heifer plus a second and a third place for the young bulls.

I found it enjoyable to listen to the Limousin judge give positive reasons after each class and it was interesting to learn that the majority of judges have attended specialist training at college to be certified judges. An early observation from me was the type of Limousin in Canada are unlike what we have in the UK. Cattle appearing to be smaller, shorter, compact with plenty of depth and having a lot of middle to them, with higher tail heads and stocky legs, the industry seems to place an importance on testicle size, and less emphasis on the quality of locomotion. The cattle also did not seem to have the same muscling traits as we would have back in the UK, however the Canadian beef grading system is rewarding more on the level of marbling, tenderness and level of fat, with their preferred grade being AAA. I heard lots of people discussing their preferred cross beast being that of a Limousin and Angus. Known as Limflex, the overwhelming consensus of opinion seemed to be that it makes the ideal crossing animal to meet market demands.

The highlight of Farmfair for me was the Supreme contest which took place on the Saturday, and was the equivalent of a Championship line up, the best of the best stock on display. It was an incredible atmosphere, with a light and music show singling out animals as they entered the ring. To my delight, the Overall Champion Female of the show was a Limousin cow and calf pair from the Greenwood herd. It was only the second time a Limousin has won this accolade at Farmfair, the breeders won a truck. The male Overall Champion was a black angus.

I was mighty impressed by the prizes on offer for each breed at the show, it was simply was amazing. For example, the Charolais society were offering a cattle crush for Champion Charolais Female and a gator for Champion Male. Some smaller prizes consisted of bar stools, bed linen and music speakers. After the Supreme contest, I enjoyed some great evening entertainment at the heritage ranch rodeo show, allowing me to learn about traditional ranching methods. I also watched the stock dog competition where it was interesting to see that some Scottish genetics were used in the history of the dogs which were running in Canada.

I truly relished my time spent at the Farmfair International Show, learning about Canadian agriculture, and meeting international contacts as well as making lifelong friends. I was very impressed at the number of cattle entries in general. However, something disappointed me, compared to the majority of Scottish shows where Limousin cattle are predominant, in Canada there is only 4,500 registered Limousin cattle in total, thus there were only 40 Limousin entries at Farmfair a small portion of the 1,000 plus entries overall.

In summing up my trip, I strongly believe this exchange is a great opportunity for the younger generation interested in the Limousin breed, or who are potentially considering breeding cattle in the future. Creating a great opportunity to meet people, build international contacts and expand Limousin genetics. The people I met in Canada have left a huge impact on my life, and I have made lifelong friends, learned valuable skills, and have new ideas which I brought back with me. I would like to personally say a massive thank you to the Young Limousin Breeders Club for allowing me to experience this invaluable opportunity and I cannot wait to continue experiencing the wonderful world of Limousin.