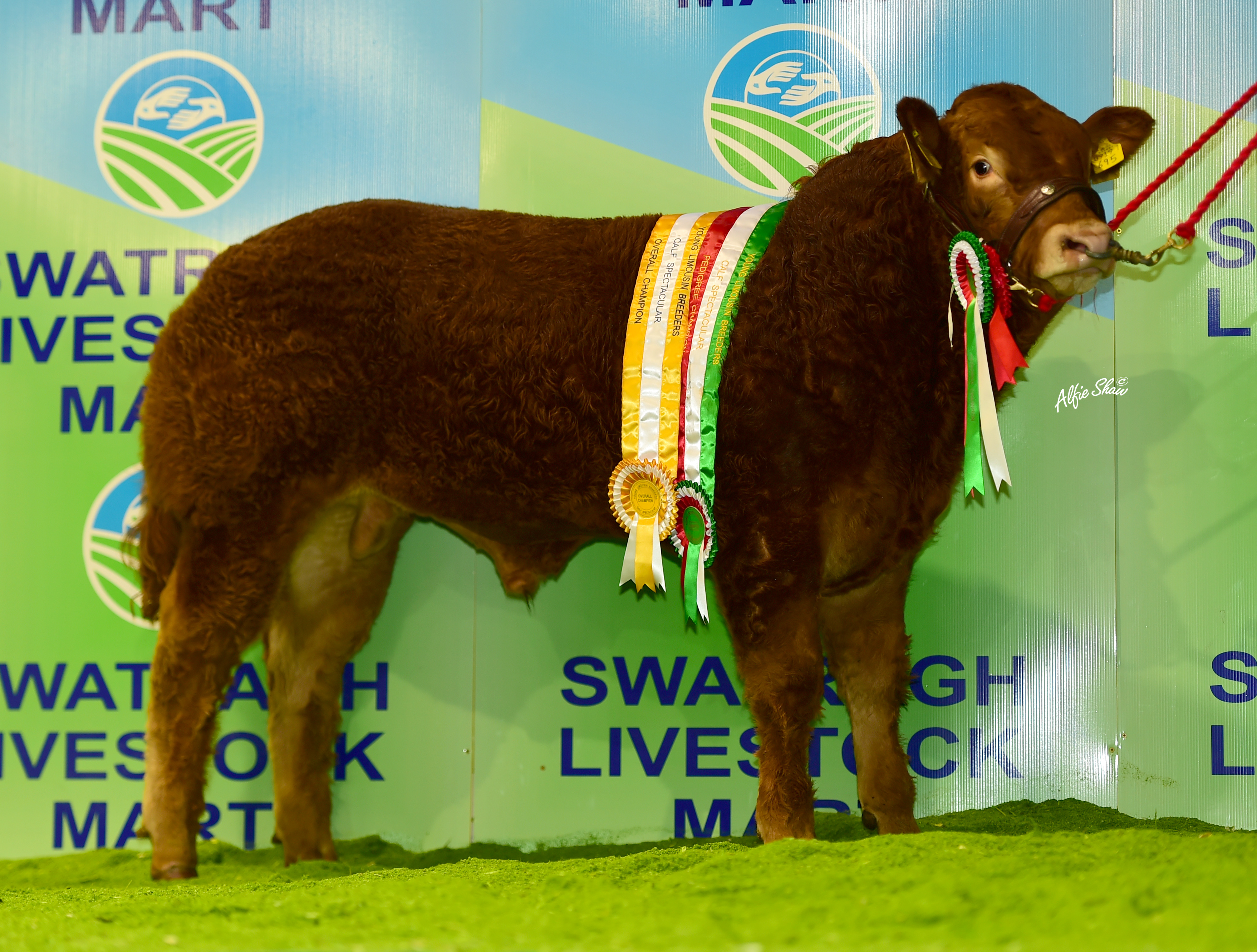 The Northern Ireland Young Limousin Breeders held their annual Calf Spectacular on Friday 28th December at Swatragh Mart.This year’s Judges were June Dowie and daughter Jennifer Hyslop. A well-known duo in the livestock arena June has been showing and judging since 2004 the length and breadth of the country. She runs 200 suckler cows and 1100 breeding ewes on the home farm in Dumfries and Galloway, Scotland. Jennifer works as stock person at the Graham’s Limousin Herd in Stirling. Showing since the age of twelve and winning many titles including at the Royal 40th Limousin Anniversary Scottish Winter Fair, Royal Highland Show and the Royal Smithfield event. Last year, as part of the Grahams team, Jennifer lifted the Championship title at three majors, the Royal Highland, Great Yorkshire and Royal Welsh. Earlier in December the team also led out the Champion at the Limousin Red Ladies Day for the third year in a row.

As local breeders across Northern Ireland began to take to the show ring, the spectators looked on as the first class of pedigree calves got underway with Jennifer judging. The results are as follows:

Next it was June’s turn in the show ring to judge the Commercial Classes. The results are as follows:

Once all the classes were judged the class winners from the Pedigree section were assembled in the show ring where after careful inspection Jennifer tapped out the Northern Ireland Limousin Cattle Club Pedigree Champion as Draperhill Orlando from the Rodgers Family. She awarded Reserve spot to Jalex Ohyeah from James Alexander.

Then it was June’s turn to select her Champion from the Commercial classes winners. She took no time in bringing forward Candy Floss from JCB commercials as her Champion. It was a 1-2 for the JCB team as Black Jack was tapped out as Reserve Champion.

In addition to the cattle judging there was also a Young Handlers contest running throughout the day. The Young Handlers were judged on presentation, control, response, alertness and showing under the real show conditions which bring added pressure. Both judges carefully watched and together made their decisions. The results are as follows:

The Ardigon Perpetual Salver for the Overall Young Handler Champion was awarded to Kile Diamond of the Pointhouse Herd. The Broadhooks Perpetual Challenge Cup for the Young Breeder with the Best Homebred Animal was awarded to Lucy Rodgers and the David Adams Heaslip Memorial Endeavor Trophy went to Phillip Williamson.

Semen straws from the Ampertaine, Truman, Ardles and Elite Herds, plus nose rope and halter complements of Elite Pedigree Genetics were awarded to young handlers who entered and showed their own home bred animal. These went to Adam and Joseph McGookin, Lucy Rodgers and Kile Diamond.

Thanks to all the volunteers, stewards and all who assisted in any way and congratulations are extended to all who took part, there was an impressive show of Limousin Cattle for the future.