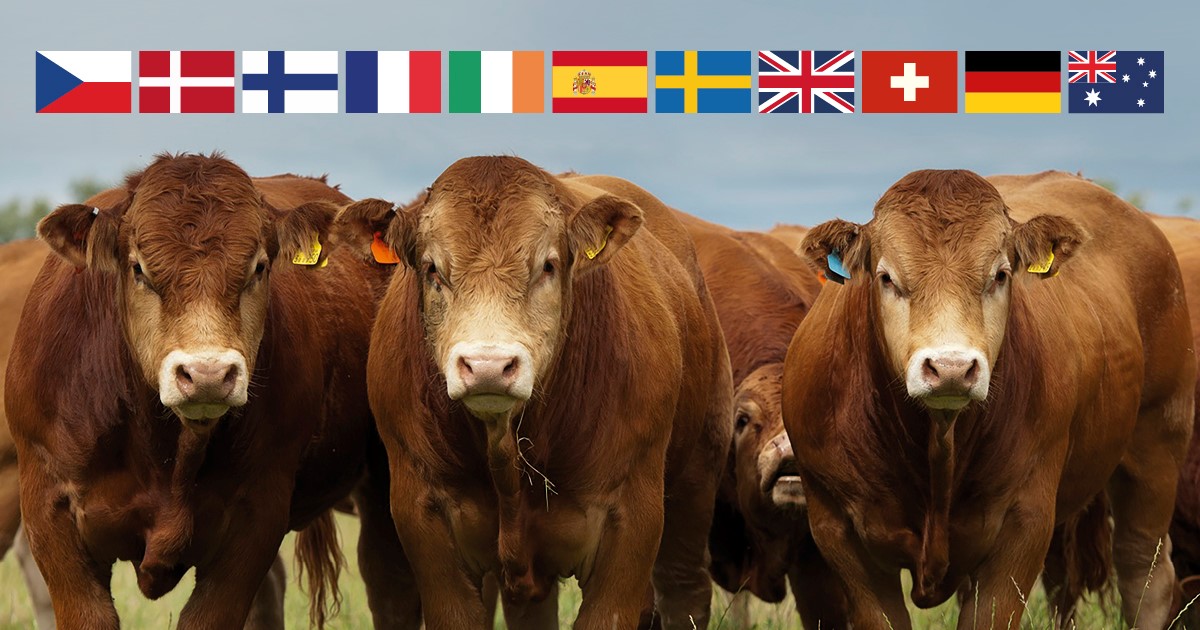 All producers of pedigree and commercial Limousin-bred cattle are set to benefit from a major development by the British Limousin Cattle Society, in association with SRUC Egenes, that sees the incorporation of international data within its latest genetic evaluation for the first time in the UK.

The new information comes from a huge data set of over 2.3 million animals with performance records and 2.6 million animals with full pedigrees.  Eleven countries contribute to it – Australia, Czech Republic, Denmark, Finland, France, Germany, Ireland, Spain, Sweden, Switzerland as well as the United Kingdom – sharing their records for 200 day (weaning) weight, since this is commonly measured across each country.  Additionally, calving ease and birth weight records are shared by the Czech Republic, Denmark, France, Ireland and the UK.

The work is the culmination of several years input by an across-country group of geneticists called Interbeef.  Supported in its early stages with funding from the British Limousin Cattle Society, Interbeef produces ‘across-country’ EBVs (Estimated Breeding Values) for Limousin which are now integrated with the Society’s own UK EBVs.  The work is a significant and exciting development for Limousin EBVs in the UK, boosting their accuracy and robustness to new levels, bringing benefit to pedigree breeders, commercial producers and all involved in the supply chain.

The benefits manifest themselves in the value the data brings to the Limousin EBVs that are produced:

Says Iain Kerr, Chief Executive of the British Limousin Cattle Society “The incorporation of this level of international data into an evaluation is a welcome first for UK beef breeds and represents a significant opportunity to make increased margins from Limousin genetics.  It comes close on the heels of incorporating new abattoir data last year that brought over 273,000 new commercial records to the Limousin evaluation – representing more than 10,000 Limousin sires – as well as the introduction of the now-familiar genomic breeding values (GEBVs) in 2016 and 2017.   All these areas of work have concentrated on trapping large volumes of independent industry data to produce breeding values that are reliable, market-focused and will support all buyers of Limousin genetics well”.

The expertise behind the development has lain within the genetics team at Egenes.   Speaking of the work, Professor Mike Coffey, leader of the Animal Breeding Team at Egenes and SRUC says “Interbeef is the beef equivalent of Interbull which is widely regarded as the innovation that has led to the international movement of dairy bull semen. Having an Interbeef evaluation will allow UK beef producers to have access to international bull semen on a scale relevant to the UK. This means foreign bulls that are known to be better can be imported to increase the genetic merit and profitability of UK beef production whilst UK bulls that rank well internationally can be exported creating market opportunities.”

Concludes Iain Kerr, “The Limousin Society and its members are working to an ongoing agenda of technical improvement to ensure that the breed continues to offer ‘market-ready’ genetics and a means of identifying them now and in the future.  This is an important move in protecting the businesses of all Limousin producers, since markets can change very quickly”.