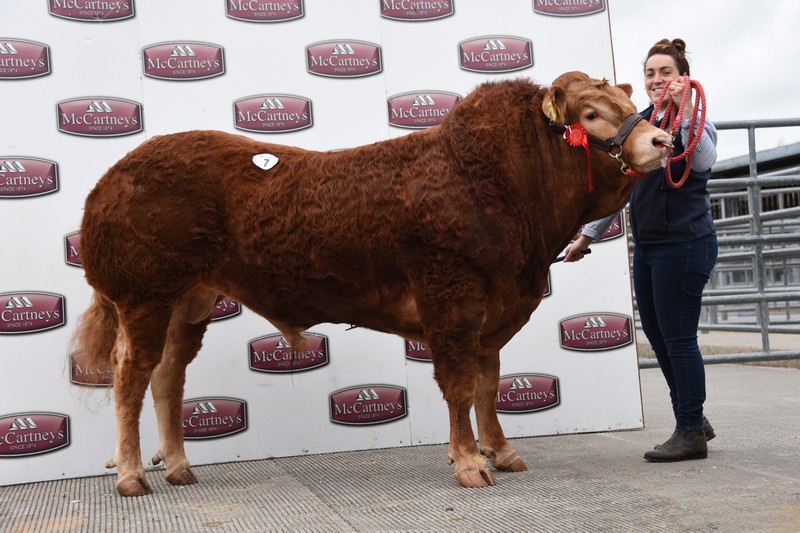 May 2017 born, Uptonley Nobby is by the AI sire Foxhillfarm Jasper, the 2015 Royal Highland Show Champion, and is out of Brutus Gaynor, a daughter of Bailea Umber.  Purchasing the top price was JG Evans, Pyllau, Esgairdawe, Llandeilo, Carmarthen.

Earlier in the day this bull had placed first in the second class in front of the judge Gareth Jenkins who runs the Tynewydd Herd at Tynewydd Farm, Groesfaen, Pontyclun.  From the small number forward, four bulls in all were sold.  Taking the second top price at 4200gns was the Reserve Champion Killerton Nelson from Mr & Mrs P W & S M Greed, Columbjohn Farm Ltd, Columbjohn Farm, Rewe, Exeter, Devon. Sired by Emslies Colossus, this September 2017 born bull, out of Killerton Jenella, was purchased by S Loveless, Sunrise Farm, Uploder, Bridport, Dorset.

From the same home Killerton Neilson made 3500gns when selling to DT & EM Thomas, Blaenant-Y-Garn Farm, Abergorlech, Carmarthen.  Entirely homebred this June 2017 born bull is by Killerton Lazio and out of Killerton Jervois.

From the Ashledge Herd of Messrs AG Kirton & Sons, Severn Lodge Farm, Buttonbridge Lane, Kinlet, Bewdley, the June 2017 born Ashledge Navarro made 3250 gns.  Sired by Honeymoor Favourite and out of Ashledge Erthyst, Navarro was bought by DE Davies, Nantgwynne, Gwynfe, Llangadog, Carmarthenshire.     Going unsold through the ring was the Overall Champion, Ashledge Newhaven also from the Kirtons.  Newhaven is another by Honeymoor Favourite and out of Ashledge Geranium.