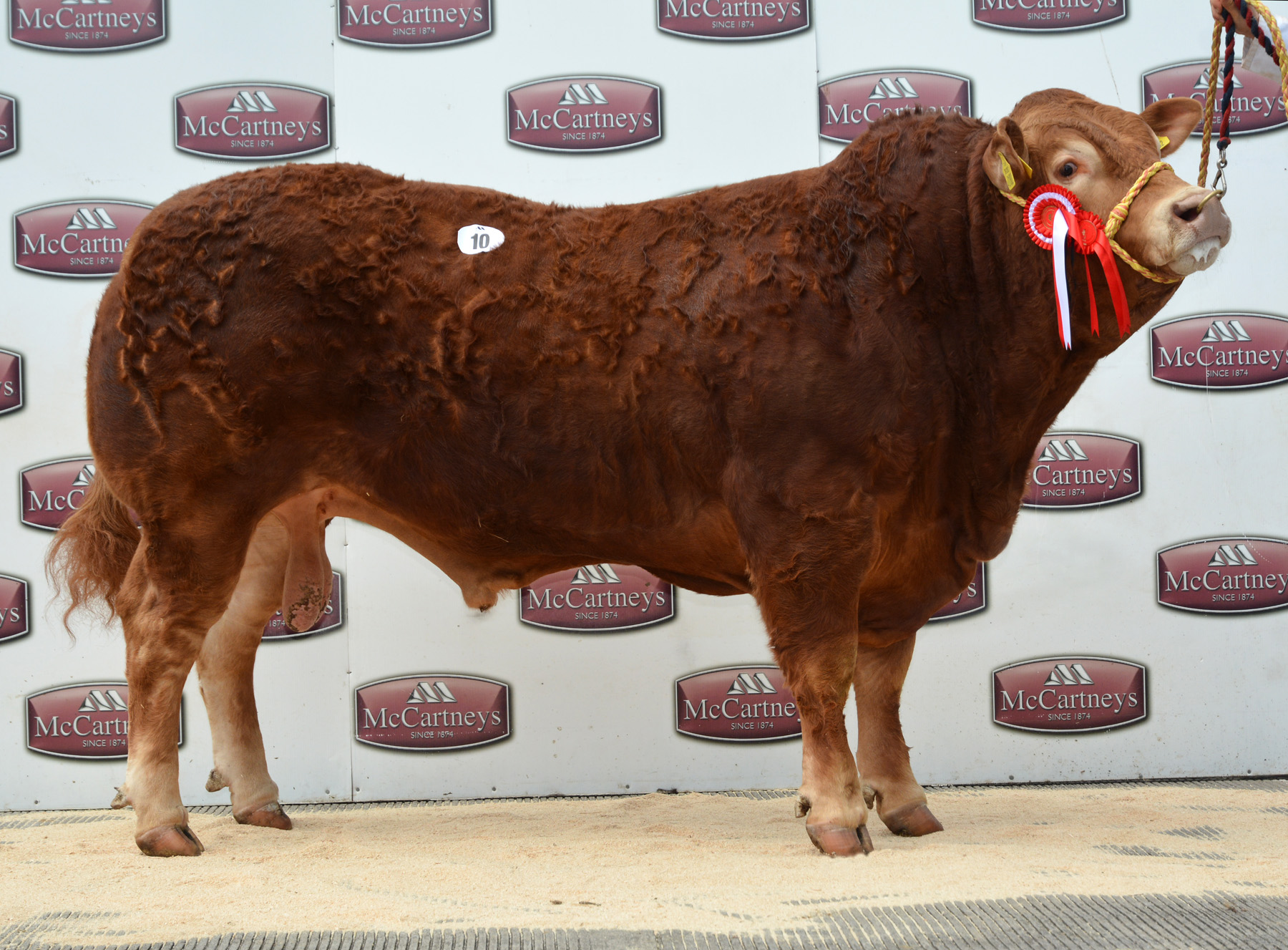 Loosebeare Ned from EW Quick & Sons, Loosebeare Manor,  Zeal Monachorum, Crediton, Devon, sold for 5900gns to lead a good trade for Limousin bulls at the British Limousin Cattle Society’s Spring Show & Sale held at Brecon Livestock Market on Saturday 11th May. June 2017 born, this bull is by the herd’s stock sire Ampertaine Jeronimo and is out of Loosebeare Gemma, a Haltcliffe Anzac daughter.  Carrying two copies of the F94L myostatin gene, and with tremendous performance figures including calving ease, this bull was bought by BD & O Comer, New Moonleaze Farm, Braydon, Swindon.  Earlier on the day Loosebeare Ned had placed first in class two before being put forward as the Senior and Overall Supreme Champion by the judge, and British Limousin Cattle Society Chairman Michael Cursiter, Arwick, Evie, Orkney.

In all twenty four of the thirty seven bulls forward sold representing a clearance rate of 65%.  Seven bulls made 4000gns or more.

Taking the second top price at 5400gns was Will and Jackie Forrester, Twemlows Farm, Whitchurch, Shropshire with their September 2017 born Twemlows Neutron. Another bull with two copies of the F94L Myostatin gene, Twemlows Neutron also carried tremendous growth figures.  Got by AI, he was sired by Swarland Eddie and is out of Twemlows Holly, a Sympa daughter.  Purchasing Twemlows Neutron was A Thomas, Llanligo, Monaughty, Knighton, Powys.

Enjoying a strong day’s trading the Quick brothers made 5200gns when selling another Ampertaine Jeronimo son, Loosebeare Newcastle.  This June 2017 born calf out of the Gronw Cheeky sired Loosebeare Gladys was another bull to carry some good figures for ease of calving.  After some strong bidding, this bull, who had stood second in his class to the Overall Supreme Champion, was snapped up by EH Bennett & Sons, Trellwydion, Llanbister, Llandrindod Wells.