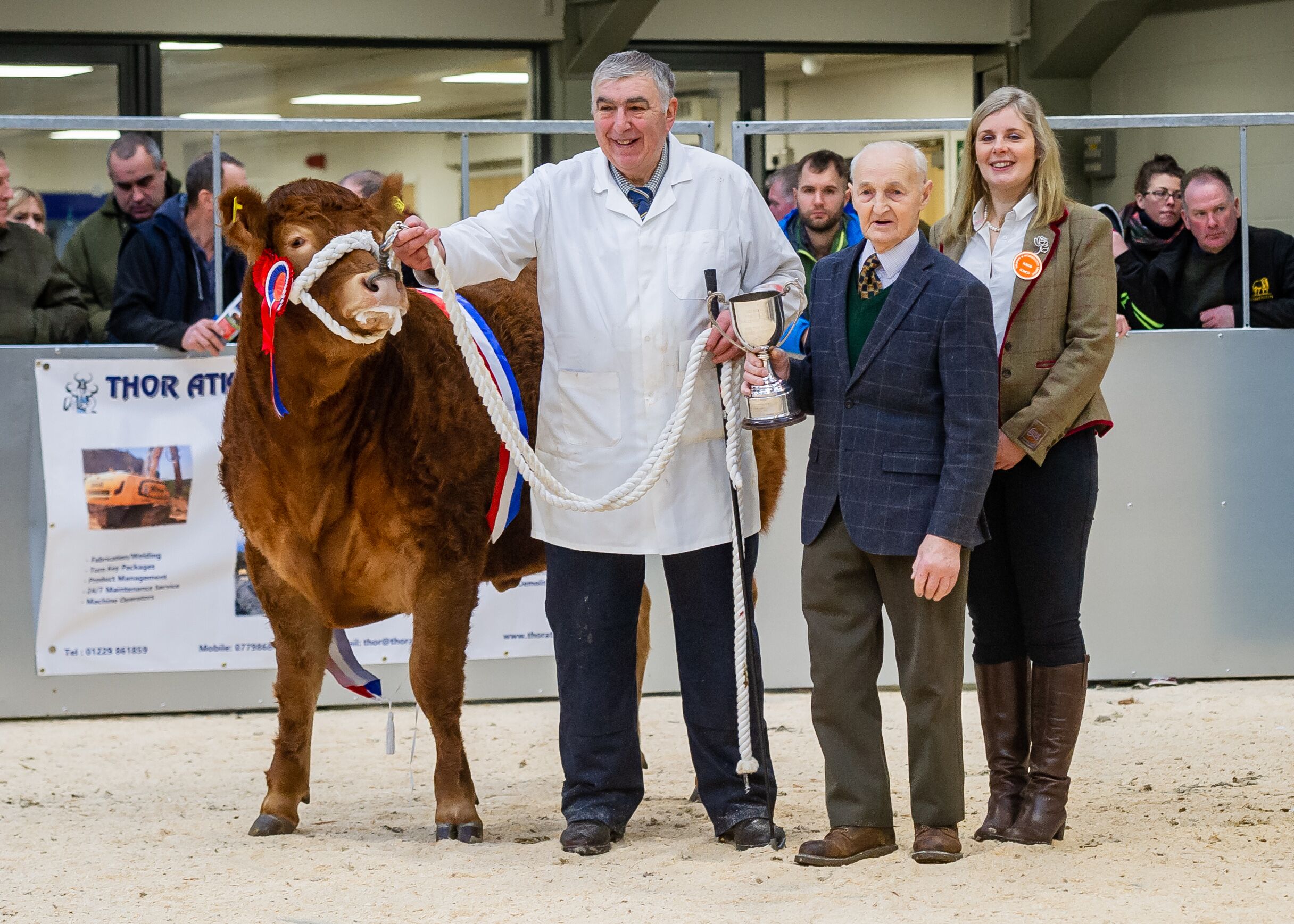 The British Limousin Cattle Society’s premier female sale, the Red Ladies Derby, held on Friday 13th December 2019 at Borderway Mart, Carlisle saw a top of 20,000gns. Overall, there was a very solid trade with good averages and 70+% clearance rate, with a number of new breeders taking their pick of the lots forward to establish new Limousin herds, and this was backed up with a good performance in the Weaned Calf Sale later that day.

EH Pennie & Son, Gwern-Yr-Ychain, Llandyssil, Montgomery, Powys led the trade with their 20,000gns Sarkley Odelisha, an August 2018-born maiden heifer by the homebred Plumtree Fantastic son, Sarkley Jaguar, and out of the Powerhouse Elite daughter, Sarkley Jilisha. Described by the breeder as ‘one of the best heifers bred in the Sarkley herd with a power-packed pedigree containing Heros, Domino, Vantastic, Sympa, Objat, Jockey and Rocky,’ she had stood Reserve Overall Champion in the pre-sale Show under judge Annabel Mason of the Oddacres Herd, Skipton who noted her ‘shape, power and presence.’ Purchasers were Messrs Corrie, Crossnamuckley Road, Newtonards, N.Ireland for their Drumhilla prefix.

At 8,500gns was Annanview Olala consigned by Kevin Watret, Northfield Park, Annan with his first prizewinning April 2018-born embryo calf by Kilcor Iceman and out of the 12,000gns Tweeddale Harika by Goldies Fandango. She heads to Messrs Miller Farms, Midmar, Inverurie, Aberdeenshire. Next best at 8,000gns was Smithy Olympia who sold as a Half Share between Messrs Watson & Co, Berwick upon Tweed, Northumberland & Messrs Barclay, Insch, Aberdeenshire. Having stood fourth in her class, Smithy Olympia was brought out by AK & JK Smith, South Park, Jacobstow, Bude, Cornwall. She had won best 2018-born heifer in the 2018 South West Limousin Club Herd Competition and is another embryo calf by Plumtree Fantastic and out of Smithy Lacey – by Dinmore Goldcrest.

Having stood second prize to the Overall Champion, Grahams Orla sold for 6,200gns to Messrs Kent & Son, Mendham, Harleston, Norfolk. Grahams Orla is a March 2018-born daughter of Claragh Gustav and out of the daughter of the German-bred polled bull Hinz, Grahams Jade. She was bred by Mr & Mrs R & J Graham, Airthrey Kerse, Bridge of Allan, Stirling.

Topping the Weaned Calf Sale was the 9,000gns Foxhillfarm Priceless on behalf of Mr & Mrs M Alford, Foxhill Farm, Blackborough, Cullompton, Devon when going under the hammer to Nugent Estate & Farm Ltd, Portaferry, Newtownards, Co. Down, N. Ireland. This first prize heifer calf is a January 2019-born embryo calf by Objat and out of the 125,000gns cow Glenrock Illusion. Judge Annabel Mason described her as ‘smart, correct and very square.’ Taking the next best price at 8,500gns was the second prizewinning heifer calf Shaws Perrie from Michael Burns, Glenside Farm, Kirkmichael, Maybole, Ayrshire. Jan 24th born, she is by Powerhouse Italic and out of Shaws Hottie (by Ampertaine Domino) whose mother – Shaws Elegance – bred the 6,000gns Shaws Josie at the corresponding sale in 2014. New owners are Messrs Barrett, Everingham, York.

At 5,500gns was Rhiwllech Pauline from DM Howells, Gelli Farm, Cymmer, Port Talbot, West Glamorgan. Born 16th January, she is by the Jacot son, Requin, and out of the Ampertaine Foreman daughter, Rhiwllech Molly. She sold to Messrs Callion, Dromore, Omagh, Co. Tyrone, N. Ireland. Making 5,000gns was another from AK & JK Smith this time in the shape of the bull calf Smithy Pluto who had stood second in the bull calf class. By the Jacot-bred Mereside Lorenzo and out of the Ampertaine Elgin-sired Goldies Mandy, he was knocked down to Messrs Ormerod, Clowbridge, Burnley, Lancs.

To view the video of top prices click below –